Today is Wednesday, Sept. 7, 2011. The Moon continues its trek through Capricorn as it builds toward full phase, beginning the day trine the Virgo Sun at about 12:08 am EDT. This brings the Moon into conversation with the mid-mutable sign cross we’ve been discussing in this space this week, perhaps making its energy a little easier to handle. 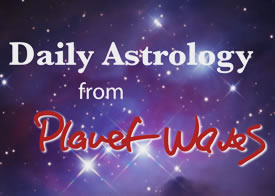 To recap: at the moment, the mid-Virgo Sun is square a cluster of minor planets and points in mid-Sagittarius. These points include two slow-moving centaur planets — Hylonome, and Pholus, which are conjunct a very large, distant object called the Great Attractor. Centaurs can provoke awareness; they can be painful; they will almost always direct us into healing mode, if we let them. Hylonome brings up the theme of pain that is spread through a whole culture; Pholus brings up the theme of intoxicants, starting with alcohol, but also various psychic drugs such as the pain that is pumped out through television. All the centaurs deal with old material, though Pholus specifically has the theme of what you might call ancestral baggage. When Pholus shows up, we are dealing with what our ancestors refused to address. ‘Ancestors’ by the way starts with your parents; go back three or four generations when investigating Pholus.

Two asteroids are influential as well. One is Narcissus, the root of the concept narcissism — what you can think of as toxic self-love (not really love at all). The other is Sphinx, which conveys the feeling of a mystery so deep we will never understand or solve it. That’s the symbol, anyway; the information we need may be accessible.

Then there is Ixion, a planet out near Pluto that is about amorality: that is, the odd way in which certain people (including political leaders) lack any concept of right or wrong. Then people follow their example. The delineation I work with is “Anyone is capable of anything.” The public corruption we are becoming aware of is symbolized by Ixion, and in Sagittarius, we have an image of politicians fraudulently claiming to bring the gospel of Jesus, and using this to amass power. The reason you know it’s fraudulent is because the teachings of Jesus are about compassion, forgiveness and acceptance. Anyone preaching hate and murder is singing a different tune, no matter what they call it.

This alignment says so much about our current moment culturally, as outlined in entries the past two days. Ultimately it is the square from the Sun that is plugging these bulbs into the socket and lighting them up. We know the Sun is a symbol of self; when we ask each other “What’s your sign?” we’re referring to Sun sign. The Sun is about self, but the self we express and identify with outwardly.

Let’s focus on Ixion. This is a slow-moving minor planet named after a king who committed the crime of killing his father-in-law. In Greek mythology he is the first murderer. He went mad in reaction to his own act, and was denied traditional forgiveness rites. Zeus took pity on him and invited him to Mount Olympus, where Ixion violated guest-host customs by plotting the rape of Hera, the Queen of Heaven. (Those words will send chills down the spine of anyone who grasps who Hera was in Greek mythology.)

Using a cloud-decoy in her shape, Zeus tricked Ixion, preventing the rape. (In another telling, Hera sets up the decoy herself.) The offspring of the cloud and Ixion went on to father the race of centaurs — all except Chiron and Pholus, that is.

Ixion does two things in this story. One is that he shows he has no morals; no ethics; no sense of right or wrong. He lacks boundaries. He is criminally insane, on an unimaginable scale — what you might call a sociopath. And he is a king, making this all the more outrageous. Second, he squanders his second chance. Even after committing murder, Zeus offers him the opportunity to heal and grow, and he takes that opportunity and plots the rape of the queen of the Olympian gods and goddesses. Zeus then expelled him from Olympus to spin in eternity bound to a burning wheel.

These planets (and the stories that come with them) can manifest on at least two levels — individual and cultural. Tracy Delaney, programmer of the Serennu minor planet ephemeris, is gifted at working out difficult delineations. “Ixion is ‘the unforgiven’ — the original source of the split,” she writes, meaning the split in the human mind. He is capable of anything, but he’s also “the king of dissociation — my deepest fears about who / what I may really be / capable of.”

Adding Ixion to the rest of the mid-Sagg alignment, including Pholus and Narcissus, she proposes: “I think maybe it could feel like: I’m hell bent on coming out (as me). I want you to see the warts and poison and filth and all — the parts I can’t even accept myself — but I want YOU to accept them. I want it to hurt, I want to wallow in the pain of losing those who can’t accept me, it will be soooo cathartic.”

“Turning forever on the wheel of fire could be read as what we do to ourselves if we can’t forgive ourselves / accept ourselves. Ixion could be where we think we are unforgivable / unforgiven / have an actual stain on the soul, the idea of original sin,” she adds. Which — notably — is about the lack of self-forgiveness. But it’s hardly original; it’s something we’re taught, generation after generation.

What can be continually surprising to us is how those unforgiven/unforgivable places can hide out in our blind spots or masquerade as something else entirely for considerable stretches of time. Old wounds, in particular the kind we tend to deem ‘unforgivable’, generally carry a lot of shame — hence the lack of self-forgiveness. Shame also contributes to the tendency of that pain to bury itself in deep, fueling reactions we have a hard time identifying with the original wound and need for forgiveness, since we do not see it. The Great Attractor is associated with things so big we do not see them, or with not actually knowing what we’re dealing with.

On a cultural level, we are seeing many manifestations of Ixion right now. There something verging on a mania when it comes to blurring the boundaries of right and wrong, appropriate and inappropriate. When people cheer when political leaders abuse people, and when people invite them to take their power and resources, you can be sure there is a kind of cultural sickness going on. One manifestation of this was the throngs gathering in the streets to party when Osama bin Laden was allegedly assassinated; it’s clearly the result of cultural sickness.

We might ask how w can heal this — yet cultures don’t really heal — individual people do, and when enough people wake up and decide to clear up their minds, the culture can start to shift. Pholus in the mix may imply that it won’t take all that much positive energy to shift things. It’s also a caution to pick your moments carefully when you feel an outburst waiting in the wings. Narcissus adds the thought to watch out for self-absorption. Yes, your pain is real and your pain is yours to express; but are you looking at the full context surrounding that pain? Are you seeing the loving intentions of those in relationship to you, or their limits, or how your pain and theirs may intersect or exacerbate each other? And not merely by the way — it takes people in pain to put up with the political leaders who inflict it.

Tracy mentions the catharsis inherent in losing those who cannot accept us for who we are, and catharsis implies deep grief — the byword of Hylonome. We do grieve the losses of everything from loved ones and relationships to self-concepts and the habits that signify them; we also often avoid change in order to avoid the pain of grief, even unconsciously, even in relatively small matters.

But what are we really avoiding? Is it the pain of loss, or rather the terror of the unknown — that moment of limbo when the old falls away and the new has not yet manifested? That may be the flavor the Sphinx brings in: that moment of mystery (in this case, the mysteries of healing and transformation). Sometimes that moment stretches out a while before nature fills the vacuum or we ourselves redefine it; sometimes it really is just a breath or two long.

Can you sit today with the mystery moment of who will still love you, warts and all? Can you reveal yourself without the truly self-destructive outburst? And if not, can you forgive yourself and accept that on this day, in these extraordinary times, you allowed grief its moment so that you may allow in something new? That something new may turn out to be forgiveness after all — in its own time.

16 thoughts on “An opportunity for self-forgiveness: Ixion on the mutable cross”

Audio clip: Adobe Flash Player (version 9 or above) is required to play this audio clip. Download the latest version here. You also need to have JavaScript enabled in your browser.