The Universe Spoke — And it Was Kinky

Discovering I belong here. Including the part I had overlooked.

As I strapped on that masterful studded leather belt, I knew I was headed for yet another transformative experience. I was discovering the power of extending my intentions to all that accompanied me on my journeys. That dark pit sex club was no exception and I now sought a more expansive experience.

What I wasn’t imagining was that I might not strap on that leather gear again anytime in the foreseeable future. 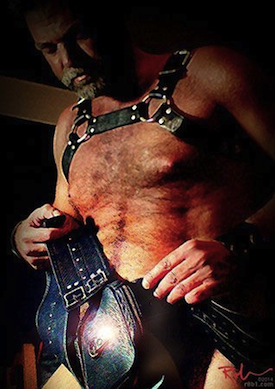 You see, for decades I had been deeply unhappy with a career that veered off course and landed me at a computer designing Mickey Mouse t-shirts. I tried numerous ventures to get my life on track but nothing would budge. I knew I did not belong there. But I couldn’t find that doorway to freedom to save my life.

Or at least not my colon. After holding my unhappiness down for so long, Mickey finally gnawed a hole in me. A prolonged struggle with ulcerative colitis ended with the removal of my large intestines in 2011.

Prior to that time I walked into every club half naked. Now an external colostomy bag mars those once-flawless abs. Overcoming this physical abnormality has proven the biggest obstacle of my life.

Years of being ill kept physical intimacy out of the picture. I tried to leave it that way and just focus on other ambitions. The fibers of my being, however, wouldn’t have it. Sex is a vital part of the picture for me. And not just any sex, either.

Though much of my early life was spent carving a path to a rougher brand of sex, I must tell you that I also love loving — I mean genuinely loving — every inch of someone. I love when simply who they are makes me want to run my tongue over every inch of them and absolutely drink them in.

Squish these seemingly incompatible approaches together and you’ve got my idea of the best possible sex ever. But it often seems I’m the only one on Earth who sees things as I do. And that makes it tempting to think maybe I don’t belong here. At all.

What comes to the rescue is something else I’ve been searching for my whole life: an abiding connection with all that is beyond this physical plane. Certainly meditation has always been deeply peaceful and clarifying. But as soon as I’m in the car behind some fucker texting under a green light, any shred of peace is hurled out the window.

I’m recognizing, though, that offering my intentions to all that is present and working on my behalf is actually yielding physical world results. This is introducing me to a security I never knew before, one that permeates whatever emotions are coursing through this human body.

One of the first points that stood out to me during my study of A Course In Miracles is, “nothing means what I think it means.” Nothing at all. Including my fetish interests. That’s why I hardly questioned why my meditative inquiries began pointing me to one of the sleaziest sex clubs around. I definitely wanted to explore this rough and risky scene. And tapping into this during meditation suggested there was more involved than my brain could calculate.

Indeed, my meetings in this ‘sex for the sake of sex’ setting were frequently the essence of miracles. I would encounter guys who just wanted to be held. Some approached with harmful intent but altered their course as our energy intermixed.

I found that by connecting with higher sources before I delved into these dark corners created a ‘cone of safety’ of sorts. Oh, but the different corners I turned when not in full connection with light and higher vibes. I have fallen into periods of great disconnectedness following trips on the rug of my belief system.

After my last painful separation, I returned to meditating. I perceived a man in a cowboy hat who kept trying to tell me something. As months wore on, he became clearly aggravated at my inability to perceive his words.

Though free from alcohol since 1989, I had held on to my real addiction: smoking tobacco. It was successfully related to me that upon ending this addiction, I would begin to perceive the cowboy audibly. I enthusiastically quit and he started talking. And how.

Simultaneously, unsettling (albeit intriguing) sexually charged meditative visuals had begun streaming in. Because of my concern that I had turned an unsavory corner, this was one of the very first things addressed by the cowboy:

“I have seen that you have held a keen interest in the things of this world which are to most an abomination and that’s okay and part of your path. What you need to do with this is to create a safe place in order to absorb these various insights or inputs. Just because an insight reaches your head, you cannot be so sure if it is the exact format you need at this time.”

“Looking within, you shall see that there is no escape from what you desire. You need only allow it to be. Just keep yourself ever-mindful of all that you are and allow all others to be their allness as well.”

The intense stream of perceptions dissipated after 2007. I then sat with it all for years trying to figure out what I was supposed to do next. That cowboy made so many lofty declarations that were simply not reflected in my circumstances:

“Know that you are all and that eliminates the confusion that might otherwise result. You have the power you need, the strength you need, the resources you need. Therefore, you have all.”

All I could think was, “I do?? But how???” But time and again all things I perceive via higher consciousness prove valuable and spot-on, no matter how long it takes them to become clear. Though I got fleeting glimpses prior, it was early in 2014 that the revelations started avalanching.

Also from A Course In Miracles, “As you perceive the holy companions who travel with you, you will realize that there is no journey, but only an awakening.” In 2014 two more audible companions made themselves known. Their assistance was far more applicable to my Earthly needs and soon all that 2007 stuff started coming into focus.

When I presented the possibility to my holy companions, I was encouraged to go for it and told this would be as good as it would ever get with this type of arrangement. I figured I would get support but didn’t expect such a powerful endorsement.

So I proceeded with things. But the ‘master’ of the house rapidly showed himself to be the exact kind of arrogant, unfeeling ass that typically occupies these positions. I read over my channeled notes from my holy companions. “This is as good as it gets” was all I could see. Then I noticed another line further down, “Do know, however, that our relationship will not endure this.”

With that, it all became clear. I realized I would much rather be at peace in my own surroundings accessing words of support and empowerment than delve into a pool of selfishness and sexual agitation that promises but rarely delivers.

It was in that moment that I decided to choose ‘God’ over sex. But the choices didn’t end there. Inspired by creative pursuits, I’ve had a need to interact with those in my fetish scene on a level beyond sex. I’ve had great trouble finding another level with them. And from all appearances, they don’t want another one.

This community welcomed me so long ago and showed me those ropes I’d dreamt of. I felt like I belonged. Now I don’t. In the past I would’ve shrunk down and asked, “Why?” But not now. After hobnobbing with those holy companions, I’m inclined to ask, “Ok, then, where do I belong?” Well, right here this instant, I belong here sharing these words. With you.

Rob Moore is a creative professional and published author whose keen interest in life’s dualities has led to an appreciation of the spectrum of possibilities available to us. Striving to make the conversation accessible to all who are interested, Rob‘s creative work, writing and podcast can be found at r0b1.com

12 Responses to The Universe Spoke — And it Was Kinky