Earlier this week, we experienced the first of seven Sun-Uranus conjunctions in Taurus (that was Monday, April 22). News events are moving at a dizzying pace, and defy comprehension. At the time I’m writing this article on April 25, it’s been just over a week since the Notre Dame Cathedral fire, and a week since the release of the redacted version of the Special Counsel’s report. It seems more like a month.

As of this writing, there are now 20 Democratic presidential candidates, with Joe Biden’s entry into the race. Also today, Russia’s president Vladimir Putin met Kim Jong-un, the Korean leader, for a summit meeting in China. Putin is moving in on a power vacuum abandoned by Trump’s failed attempts at courting diplomacy with Kim.

Texas executed John William King for the 1998 killing of James Byrd, the first time in modern Texas history that a Caucasian man was executed for the death of an African American man. This was the infamous dragging death by a white supremacist.

Pres. Trump denied that he ordered then-White House Counsel Dan McGahn to fire Special Counsel Robert Mueller III. He said that McGahn had lied to the Special Counsel about this during the investigation.

McGahn, one of the star witnesses in the Special counsel’s investigation, has been subpoenaed to testify before Congress, but Trump brought a personal lawsuit to block his testimony. The president also vowed to fight any subpoena of documents or testimony by congressional oversight committees, in effect daring the House of Representatives to impeach him.

On that note, if he is impeached, Trump said he would fight it at the U.S. Supreme Court. He is clearly referencing his impression that he would get a 5-4 win on any case he brings, but there is no such course of action provided for under the Constitution. (What actually happens during an impeachment is that the chief justice presides over the trial, with the Senate serving as the jury.)

Contents of the report of the Special Counsel, 448 pages long, are gradually percolating through the news. The report details the astonishing extent of Russian meddling in the election, which came in the form of a social media propaganda campaign dating to 2014, and hack and dump operations of email and confidential documents stolen from formal Democratic Party offices and Hillary Clinton’s personal office.

Jared Kushner, the president’s son-in-law, this week falsely summed up the operation Wednesday as consisting of “a couple of Facebook ads.”

On the Personal Side of the Equation

We live in a restless time. I keep reading articles about the impact of lack of sleep and sleep hygiene. Part of this impact is coming from being inundated by radio waves, which are invisible light waves; these burn melatonin. So too does exposure to blue light, which is a fact of looking into screens all day.

But there is something more, a sense of agitation, nervousness and fear, as if we’re heading toward an edge that we cannot see.

Despite all the discussion about global warming and climate change, collectively our societies are doing very little about it. Economic success is still measured in growth — corporate profits and the value of the stock market.

Many people are struggling — really struggling — to make ends meet as everything gets more and more expensive. Economic woes are always an issue; we hear about them in good times and bad. But we are living in the New Gilded Age, when there are more billionaires than ever before. Money is energy, and much of it is stagnant at the moment, as companies and individuals hang onto huge cash reserves. There is fear of loss and little imagination about what to do with vast sums of wealth that exist.

As I’ve written many times, my studied impression is that the internet is what is driving consciousness: the sensation of what it feels like to be alive right now. Inundation by internet is the primary factor behind the social crisis, the anxiety epidemic, the sexless relationships, and a general state of psychic chaos.

I recently asked my readers how they were responding to Uranus in Taurus. Here is a sample of the responses:

“It’s quite an upheaval. My trust in God has increased and at times is still quite tested. Due to a lingering concussion that hasn’t healed I haven’t worked for several weeks. I am far out on a limb in completely new territory. I have a sense that I am learning many things that I’ve needed to learn for a while. I am also in brand new territory that’s missing some of the old markers.”

“What I notice over the last couple of months is that I am very ‘stirred’ up in feeling into early childhood memories. Where I lived at ages 4-6, (big stir), all the moving from home to home before I was in 5th grade… my inner sense of personal sovereignty and authority has had its challenges as I feel that speaking in honesty and truth can fucking stir lots of pots. It seems to put people I care for in uncomfortable wonder about my authenticity in relationship to them, cause I’m challenging them.”

“Quite a lot has shifted for me but the one that really stands out is as a 57 year old man who is pretty conservative in physical expression and exercise, I started going to a weekly free form dance and have progressed from slow soulful movement to full on dance machine!”

“Everything about personal awakening resonates, though that started about 3 years ago. Building on that theme now, Uranus seems to be about burning through convention to see what remains, like the alchemical calcination phase, and using what’s left to (re)build something new. This is showing up in my career, which is being guided towards creating a new, spiritually-based business model from what survives the fire.”

“On the 15th my shelf of greenware fell over and every piece broke. My shelf of essential oils came out of the wall; luckily only one bottle broke. I found myself reading about broken vessels, specifically oil bottles and the shards with drops of oil representing light and the connection to everything. But the break through this week, and I think that is what Uranus in Taurus is offering, is that these material things do not matter except for what they represent. Throwing pots is a meditation for me. It is the process that is important, not the creation of the material, but the creation of the spiritual body. Part of my path, it seems, is renunciation or detachment to the material plane. Creation of the spiritual body is most important. I also learned that you cannot have a loving connection to others without a loving connection with God/creator.”

The Beltane New Moon on May 4 is an intriguing chart. I’ll have more to say about it in Monday morning’s edition, and in the upcoming Planet Waves FM (where I will continue my coverage of the Special Counsel’s report, and ignoring the presidential race). The horoscope below is based on the Beltane chart — shown in the graphic below. 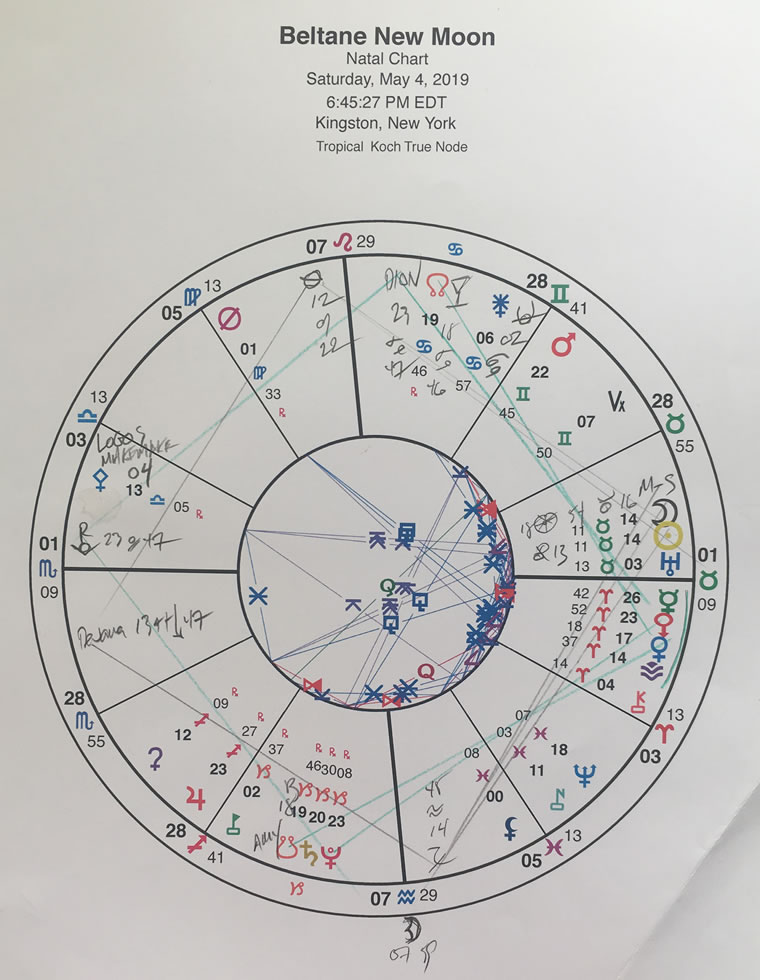