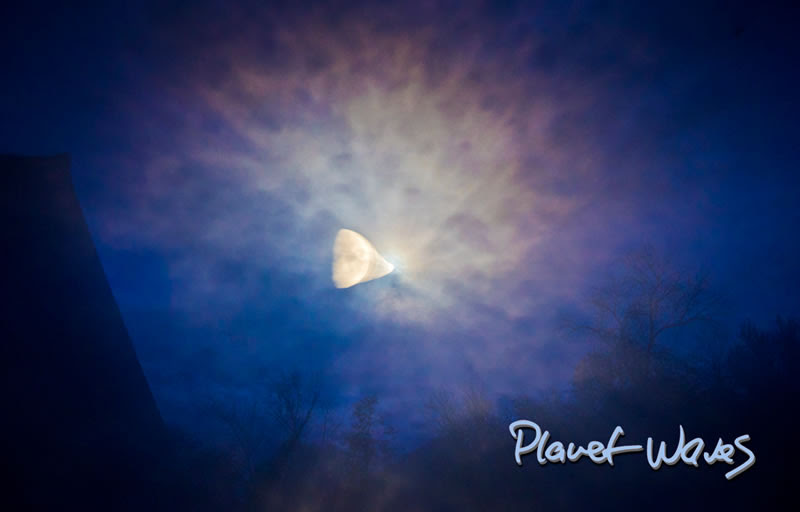 In the midst of so much other astrology, a rather alive Full Moon takes place on Halloween. To sum up, the Moon will be exactly conjunct the rebellious, electrical planet of surprises, Uranus. It is the perfect aspect for our moment, happening just days before the United States election.

Many who are sensitive to the energies experience the “thinning of the veil” this time of year. The veil is the scrim that separates the physical world from the astral. The thinning effect serves as a background to the Full Moon. This is the season where a diversity of cultures celebrate their version of Days of the Dead, where meetings with the ancestors are invited and facilitated. There are the more somber rituals (standing up for the dead) and the more celebratory ones (feasts in cemeteries).

This fits the central theme of Scorpio, which is about our biological and emotional experience of sex, reproduction, death, transformation and regeneration. You might think of Scorpio as the metabolic engine of astrology. If the astrological wheel were a cell, Scorpio would be the mitochondria.

What Happened at the Last Saturn-Pluto Conjunction in Capricorn? By Spencer Stevens

The Jan. 12, 2020 Saturn-Pluto conjunction in Capricorn was exact just a few, short months ago, and we’re watching the results unfold right in front us. To help us more clearly understand the impact of Saturn, (authority and responsibility) joining with Pluto, (death, decay, and transformation) in the sign that represents the institutional structures that gird our lives, it may help to take a look at the last time these two met up in Capricorn.

New Planet Waves TV has been published on our YouTube channel.

Scorpio and the Genome

While DNA was discovered in the 19th century, it was not until 1953 that James Watson and Francis Crick discovered the double helix configuration that is now recognized as the sigil of life itself.

Thoth Tarot was a major evolution on the tarot in many ways. One is that it visually keyed the cards to astrological symbols. The cards have always had a connection to astrological symbols, though the whole point of the tarot was to be disguised as a game so that it would not be seen as an esoteric tool. The symbols were encrypted into the designs of the cards, and conveyed through numerology.

One of Crowley’s roles as an author and teacher was to turn the esoteric inside out. As part of that mission, he identified most major and minor arcana cards with astrological glyphs. There was never any doubt among those initiated into the tradition that the 13th card in the major arcana (Atu 13) was associated with Scorpio. But as with many things, he makes it plain.

Here is the video I was banned from Facebook for posting. The new Planet Waves FM (posted to its tab above) contains a longer interview with Reiner Fullmich

How to Change Your Mind

Sunday, I was contemplating where to begin discussion of this week’s astrology, when I noticed that on Monday, retrograde Mercury is opposite Uranus. Both are in fixed signs: Uranus in Taurus, Mercury in Scorpio. An asteroid is involved, which is Juno. The alignment is pin-perfect.

The combination of Mercury and Uranus has the feeling of a revelation. Uranus can feel like the stroke of inspiration, or the life-changing flash of insight. It is the patron of revolutionaries and inventors. Mercury is a local, accessible representative of awareness — in the words of Lord Krishna, the mind of the senses and the consciousness of creatures.

In mundane astrology, this aspect is a “surprise news” type of thing. It might also pertain to unusual technological oddities occurring during the retrograde*.

Center of Cyclone: The Illusion of Electoral Politics. Election and Inauguration Charts

The U.S. presidential inauguration is fixed by the Constitution, currently at noon on January 20 after an election. The chart is always Taurus rising with the Sun in the first degree of Aquarius, in the 10th house. On one level this is an image of how stable the presidency is, whether we are talking about the persistent quality of Taurus or the pattern-fixing quality of Aquarius.

The variables are the planets and the Moon. We get a rather strange chart for the inauguration of Jan. 20, 2021. I have been looking at this chart for years. It looks mean, with an exact conjunction of Mars and Uranus (which has the feeling of sudden, unexpected violence). In Taurus, Mars and Uranus could also represent an economic shock. It could also represent public outrage.

The 10th house of the presidency is loaded, with Mercury, Pallas, Jupiter, and Saturn along with the Sun. These are all in Aquarius. This will be the last inauguration with Pluto still in Capricorn. (The 2025 inauguration has the Sun conjunct Pluto in the 10th.)

Notes from the Eugene, OR Environmental Film Festival

Today, as the earth splits beneath our feet, water is siphoned by human whims, and we are thrown unprepared into the ether of digital conditions, not all that is sane and good is lost. A vast resource is emerging to guide us as we balance on the brink of humanity’s coming of age. Taking their sovereign place in global leadership, Indigenous communities around the world are offering their traditional ecological and cultural knowledge to address the crises humans have manifested on the planet.

One Word Sawalmem and Native Wisdom: The Peoples of Eastern Oregon are two recent documentaries that bring this essential perspective to the general public. In both, we see a contemporary incarnation of Indigenous storytelling traditions. Through the medium of documentary film, One Word Sawalmem embodies twenty minutes of the Winnemem Wintu worldview with a single word. Its early moments blend the rhythms of human song, waters heaving in the San Francisco Bay, and cries of seagulls, compelling us to resonate with the message before we can even name it. The individual voice of Michael “Pom” Preston, narrator and co-director of the film, carries many voices.

We now live in the age of the new planet Eris. This distant world is an influence that represents a special kind of chaos: the one we are soaked in right now. It’s been so long since we had any semblance of a different environment that it’s nearly impossible to see what we are experiencing for what it really is. Some may remember.

This morning I dreamed I was walking around on a street corner, and hanging inside of a phone booth was a complete stack of set lists from a music tour that had ended the previous night. I looked through them with interest, curious why someone would go through the trouble of carefully making the lists, which were written on beautifully designed forms, and then leave them hanging somewhere. I took them and made them my own.

From the dream I received the message that one tour is over and complete, another is soon to begin. I am in Montauk at the moment, reflecting on everything that has happened this year, something few of us have had a chance to do.

We now live in the age of the new planet Eris. This distant world is an influence that represents a special kind of chaos: the one we are soaked in right now. It’s been so long since we had any semblance of a different environment that it’s nearly impossible to see what we are experiencing for what it really is. Some may remember.

THE PRESIDENT TESTS POSITIVE. IS IT TRUE?

Frank Zappa is reputed to have said, “Politics is the entertainment division of the military-industrial complex.” This may seem cynical, and as a lifelong observer of politics (since the 1972 election, when I was 8), I have long pondered this idea.

What Frank really said in a 1987 interview with Keyboard magazine is, “I say politics is the entertainment branch of industry, and government is what we need. We have a diverse population in the United States, with all kinds of different needs that have to be taken care of. That is the righteous function of government.”

The misquote and the real one amount to the same thing. Politics is a distraction from what is really happening in industry. The business of America is business. On his way out of office in 1960 and 1961, Pres. Dwight Eisenhower famously (and repeatedly, three times by my count) warned of the “military-industrial complex,” as he called it, spreading its influence everywhere, down to every school board in the nation. He meant that the priorities of industry, driven by government contracts and a military mentality would, if not blocked, take over all of civilian life.

Read More of This Article on Planet Waves

Mars retrograde in Aries is the final transition, the emotional, psychological and experiential bridge, to the last event of 2020: Jupiter conjunct Saturn in Aquarius. Mars retrograde represents the work of individuation and of self-actualization that will make the group experience in Aquarius more relevant and more easily workable.

Borrowing a line from Lou Reed, “Self-knowledge is a dangerous thing — the freedom of who you are.” Dangerous perhaps to a way of life that involves allowing yourself to disappear and be insignificant. Mars retrograde in Aries invites boldness and embodiment and the exploration of your will. Order here for instant access, or choose your individual signs here