Astrology Public Radio in affiliation with the Pacifica Radio Network (which carries Democracy Now!). Planet Waves FM is a project of Chiron Return, a 501(c)(3) nonprofit corporation. We are 100% listener supported. Your contribution — large or small — helps make this program happen. We run on a little money and a lot of love. Thank you for your generosity; please send a friend and stay in touch! New program most Friday evenings.

For those of you who like a good, strong cup of coffee, I have an interview with Pam Popper. Founder and president of Wellness Forum Health, Pam is a naturopathic doctor who has gone into medical journalism and a kind of citizen action data collection. You may be familiar with her YouTube videos, which focus the issue of civil liberties. This is the topic that few people want to talk about, being the good citizens that we are, we do what is necessary for the whole. But just one thing: without our rights and our freedoms, we have nothing; we cannot take care of ourselves, our families, our health, our communities or our businesses.

Here is the report on the nurse from Palm Beach who died of kidney disease, and had been propped up as a symbol of Covid-19 afflicting the supposedly young and the healthy.

Here is the Department of Homeland Security document on psychogenic illness mimicking a chemical or biological attack — based merely on the fear of terrorism.

Here is the New York Times article from 2007 on the phony pertussis outbreak at Dartmouth, caused by the polymerase chain reaction test. That’s the perfect name for the assay isn’t it? The chain reaction? It’s a fake test. It proves nothing. But it’s being used to justify this kind of thing.

Here’s a link to our coverage of the same incident, researched by Spencer Stevens.

These people are involved in a Covid vaccine and have been charged with manslaughter in France.

This website is reporting that four Ukranian soldiers have died after receiving an American Covid vaccine.

Here’s a new article by me called The Branching of the Road.

Welcome to the first five-hour Planet Waves FM. Tonight’s edition combines my regular program with the Deadhead Hour with the Music Appreciation Hour, and features Daniel Marc Sternstein — one of my collaborators on the Vision Quest project and a little or a lot of everything else.

Here are the time dividers: Fucking through a wall rant begins at the top of the program, leading into a discussion of the PCR test being used to prop up the phony case count. Read more about that in this article by Celia Farber.

The outro is actually Eyes of the World >> Saint Stephen >> Sugarmagnolia/Sunshine Daydream. No Estimated Prophet this time!

The program is long! I’ll divide the file in half for easier playing on slow connections. That will be later Friday evening.

Here are the smaller files, dividing the program in half:

Here are some resources:

Prof. Beda Stadler Interview and Transcript. I’ve now listened to this four times — the fourth was the most interesting when I could put the most pieces together.

Chiron: Key to the Gemstone File, about the IBT Labs scandal. Stay tuned for Investigative Reporting from the Kitchen Table, part one featuring Peter von Stackelberg.

Here is the article from Childrens Health Defense on how the death rate would be 90% lower if CDC guidelines on deaths were used.

Here’s some data on deaths staying stable while the phony case count goes up exponentially — which means that case fatality is going down, not up.

Canada wants you to fuck through a wall to stay safe from Covid-19. I wish I had made that up.

Some notes on the Dead at Barton Hall, Cornell 1977 and the newish release Get Shown the Light.

Did I forget anything?

New from Vision Quest: This is a Developing Story

Tonight’s edition of Planet Waves FM is a conversation with Dr. Angelo Castello, someone I’ve known 25 years and with whom I’ve had an ongoing discussion of holistic health. We talk about “terrain theory” as the thing that makes the difference — that is, the condition of the person rather than the alleged power of the pathogen. This is an exciting, unusual discussion between two people well-versed in holistic health issues, and who understand one another’s points of view.

Sunshine is the Best Disinfectant

Tonight’s program is called “How to Think For Yourself.” I begin with a discussion of thinking for yourself in the face of fear and deception. In the second segment (beginning at 1:05), I cover the Cancer New Moon. I do not cover the Leo ingress; that will have to wait for Monday’s edition. Then is the Andrew McLuhan interview (beginning at 1:48) and Vesta Studio on involuntary celibacy (beginning at 2:48).

My conversation is about the influence of digital technology on the Covid situation: this is digital from top to bottom, except when someone actually gets sick. The test is digital, the idea of the pandemic (as opposed to the actual epidemic) is digital, the “news” is spread digitally and so on.

Planet Waves FM is a project of Chiron Return, a 501(c)(3) nonprofit organization. Our projects include our internet radio program dating back to Radio Woodstock in the late 1990s, as well as Covid19 News, The Gemstone File document repository, and now in actual development, Investigative Reporting from the Kitchen Table.

We are sponsored exclusively by your contributions, whether large or small. If you feel moved to sponsor this program, you may do so here. All donations from the US are tax-deductible.

Thank you to the many listeners whose generosity makes our work possible.

Correction, the article I was referencing was not Dioxin Critic Sued (which is on a similar topic), but rather See No Evil by Vicki Monks. They are both about fraudulent reporting on dioxin in the mainstream press.

As for your resources: The “forgotten” one is Kary Mullis describing his invention of the polymerase chain reaction. SEE VIDEO BELOW THE MUSIC TRACK!! Here is the article on cell line contamination, about Dr. Christopher Korch, the article about Gardasil injury, Joshua Halinen’s article Living in Hell about sexual repression in his childhood evangelical church and finally, Mercury, Weaving the Story of Nessus (my best article about Nessus). I forgot one!!!! Let me know and I’ll post it.

In this weekend’s edition, I consider the astrology where “this all” is headed — the Jupiter-Saturn conjunction, about which I probably did not say enough. This is the final resolve of all we’ve experienced in 2020, yet the outcome is not certain: like many things right now, much hangs in the balance. And that balance is the willingness to be aware. The mid part of the program is a conversation with Spencer Stevens, who has been coediting Covid19 News with me the past couple of months, and doing an excellent job. You will hear some shop talk about what it’s like to be tracking this issue day to day, confronted with an onslaught of lies, chaos and confusion. In Vesta Studio, I take another look at the astrology — including Venus in Gemini — and consider the matter of sexual ambivalence: of not knowing which way you might lean. In politicized sexuality, everyone is perfectly confident and marches with their faction. In actual sexuality, there is the possibility for doubt, a good use for curiosity, and the potential to explore yourself and others; your feelings, and those of others. 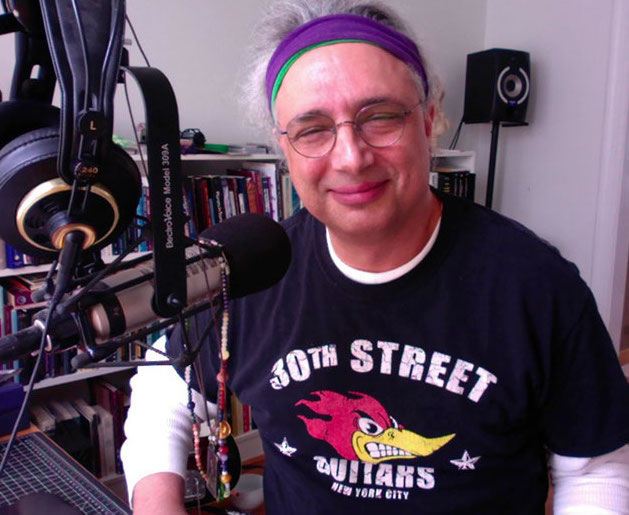 Beginning on WDST-Radio Woodstock in 1996, Eric has developed free-form talk/music formats, inspired by the WPLJ Sunday night program hosted since 1973 by Bill Ayres (the former priest and founder of WHY Hunger, not the political figure). Along the way, he’s made guest appearances on WBAI and many other Pacifica stations, on news stations in the New York area, and did one-minute tarot readings during morning drive on Oldies ’97’s Bob Miller Show. Planet Waves FM is now at somewhere around episode 550.