KINGSTON, Jan. 2, 2020 — A top-level organizer of the “Me Too Kingston” movement, which had me (Planet Waves publisher Eric Francis Coppolino) fired from four jobs in the spring of 2018, has admitted that the movement was a fraud, and that she knew so at the time.

Li (Lisa) Wojehowski joined “Me Too Kingston” in April 2018 and attended several meetings organized by Hillary Harvey, who worked at Chronogram and at Radio Kingston. Wojehowski offered her services as an organizer, and was at the center of events.

“I regret that this false incident distracted attention from actual abuse survivors and actual perpetrators, which in the end only damaged the integrity of the Me Too movement and feminism in general,” Wojehowski wrote in her Dec. 18, 2019, apology.

Local activists took up the cause in early 2018 after the Planet Waves article Take a Step Back appeared in the local publication Chronogram, where I had been a columnist for 22 years.

Previously, I had written about my own experience of sexual harassment in the New York Daily News. “Me Too Kingston” claimed that Take a Step Back was really a preemptive cover story for my alleged nefarious double life as a sexual predator.

In fact, the article called for equal treatment of male and female survivors, and discussed the potential problem of false accusations. The article quoted numerous Planet Waves clients stating their opinions about the Me Too movement, as well as Margaret Atwood, author of A Handmaid’s Tale.

‘The Goal Was To Get Eric Fired’

“I joined the Me Too Kingston movement against him (there were no other targets), and offered my services as an organizer,” Wojehowski wrote. “I attended several meetings, the purpose of which was to get Eric fired from all of his jobs. There was no attempt at restorative justice. The goal was to destroy his career.

“It was much easier — and frankly, more soothing to my ego — to go along with the attempts to annihilate Eric. The consequences of the campaign have been detrimental,” Wojehowski wrote.

Detrimental? You might say that — though not to her. With Wojehowski’s support, Hillary Harvey planted articles in the Kingston Times group of newspapers, which essentially spun her Facebook rumor campaign into an 8,500-word series of newspaper articles. Based on this series of fabrications, my contracts with Chronogram, Radio Kingston, Omega Institute and the Kepler Conference were canceled.

An investigation conducted for Chronogram by former United States Attorney Ryan Poscablo concluded that there was no basis to the claims, but Chronogram ignored this determination. Chronogram’s publisher, Jason Stern, had previously said that “this isn’t about the facts,” and described the events as a “witch hunt.” Stern also told me that Harvey was doing this to “build up her career.”

‘Convenient for Our Story’

Wojehowski’s statement is supported by extensive interviews and written statements gathered as part of a Planet Waves FM-Pacifica investigation. 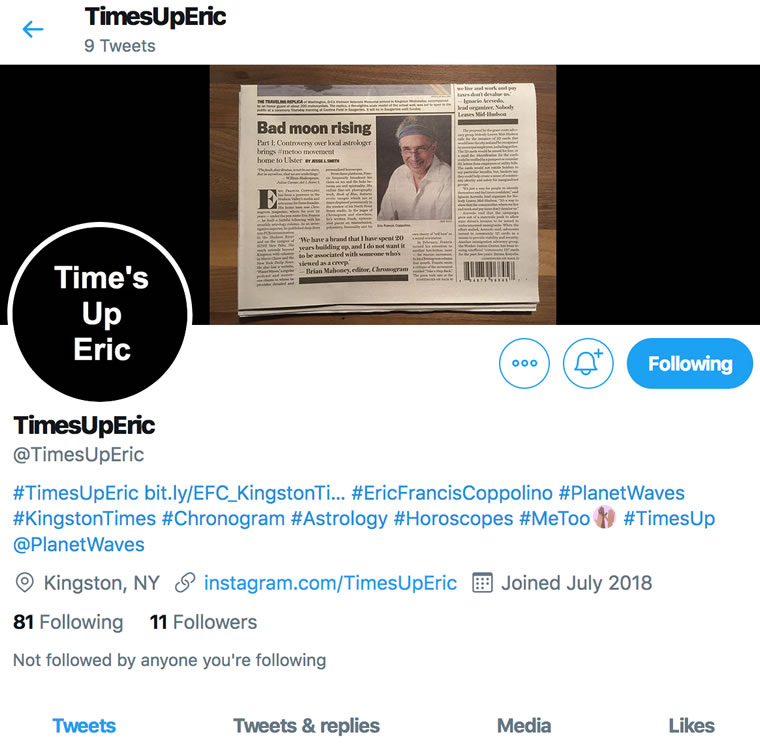 “In my initial private meeting with Hillary Harvey she told me Eric was the ‘Harvey Weinstein of the Hudson Valley’. She also wrote this in a Facebook post. Caught up in the hype, I bought into this idea because it was convenient for our story.

“I now understand this was not at all truthful. In fact, I already knew from personal experience that Eric is not only extremely gifted, but also open-hearted, unusually generous, and genuinely invested in the well being of those around him.”

She described the atmosphere inside the meetings.

“The purpose of the Me Too movement is to fight sexual harassment, assault and abuse, and I personally heard no such accusations against Eric. Most of the claims I heard were hearsay, and all of them were vague. Any claim that was made required no proof or backup. Anyone could have claimed anything.”

She admitted that there was no attempt to seek me out for discussion. “To my knowledge, the group made no attempt to contact Eric, so he had no ability to respond to the discussion, answer questions, or defend himself,” she wrote.

There exists a comprehensive resource area on the Planet Waves website, which includes my coverage, primary source documents, legal pleadings (including the draft of my civil complaint) and about 15 letters of reference from my clients and colleagues.

PS — Here is an interesting video on cancel culture sent to me by Andrew McLuhan. This presentation breaks down the issues clearly.