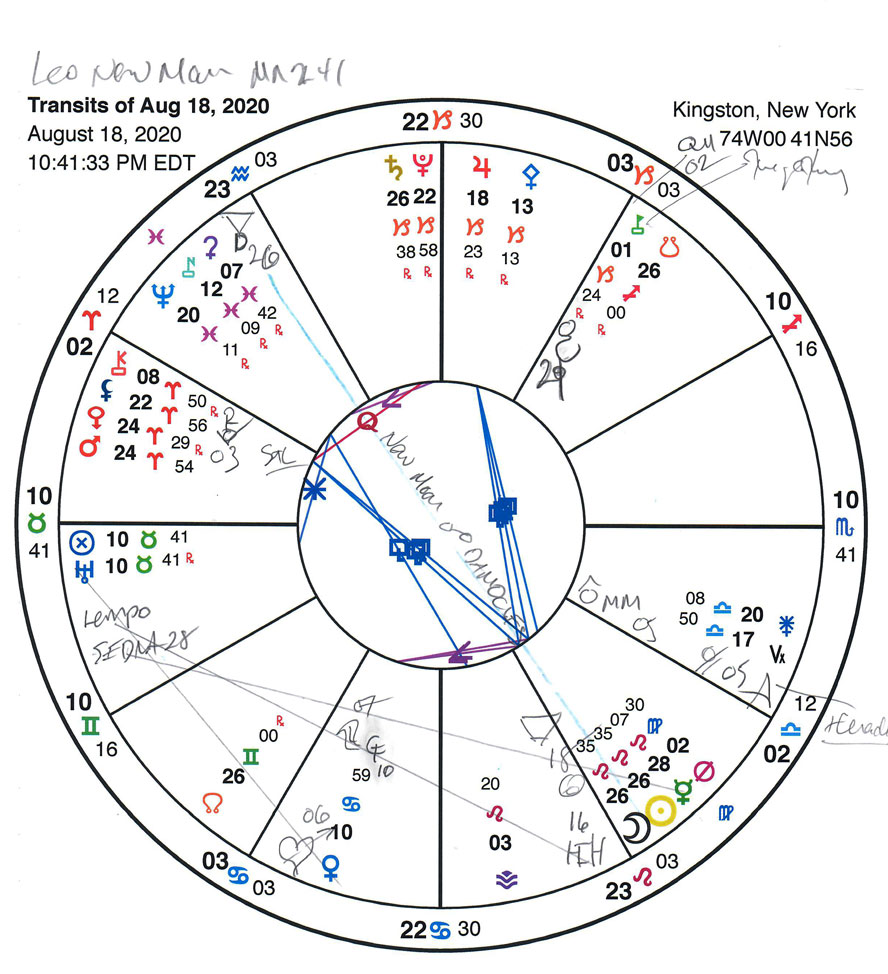 If this feels like an edgy New Moon, it’s not just the Mars-Eris conjunction. The Moon-Sun conjunction is exactly opposite Damocles, an odd minor planet with a 40-year orbit. Damocles is not an asteroid; it’s more like a super-centaur. It spends nearly its entire orbit in one sign, Aquarius: about 28 years, then whips through the other signs in about 12 years.

I’ve written about Damocles once, in my astro-bio of Barack Obama, who was born with the Sun opposite Damocles. Here is the article, written just before the 2008 election, which will give you some background on this point.

The sensation of Damocles is like living as if one has a sword dangled over one’s head, hung by a thread. Planets are not usually so literal. However, were this not the feeling of our moment — every hour a new public crisis — that might be a little different.

And here we are.

The Moon and the Sun align in Leo at 10:41 pm EDT Tuesday for the Leo New Moon of 2020. The Moon-Sun conjunction is in a grand fire trine with Mars-Eris in Aries, and the South lunar node and Galactic Core in Sagittarius. This is the “get the lesson while it’s easy” configuration.

The Grand Fire Trine New Moon — that will create momentum that builds on itself. If this is positive, it will become more so, and if you resonate with fear or anger, that will gather momentum as well. So choose which side of the wave you want to be on, and remember, there’s no time like the present to put all your spiritual training to some good use.

There is a lot to pay attention to right now, and the daily bid to survive and handle the emotional pressure is consuming lots of human energy. It will help if you aim your potential a little higher, and strive to both have some fun and also to recognize that you can play a role in global healing.

The place to start is with yourself. Fear is consuming much human energy on the planet right now, which has a paralyzing effect.

In order to have some flexibility of thought, choice and action, you’re going to need to figure out how to work your way out of a fearful state, if you haven’t already started the project or figured out how to do it.

Be aware that there is, coming from many directions, peer pressure to be afraid, worried and freaked out, on pain of being shunned or angering the great SARS god.

Everyone has to work this out on their own, though we could start with how anxiety doesn’t accomplish anything except taking you offline.

There are a good few people who are taking this in a reasoned and balanced way. This is the best approach, if you can educate yourself to the point of getting there. That will take reading. Calm, patient reading, some of it from books.

Virgo Ingress of the Sun

The Sun is about to enter an earthy sign, Virgo, exact at 11:45 am EDT on Saturday, Aug. 22. Virgo is the last sign of the season, summer in the north, winter in the south. All the seasons end with mutable signs. The sensation is that of one experience giving way to a new one. There is a rush of energy that comes with the transition, though you will want to take this one slowly, one day at a time.

The influx of Virgo will feel good in these fiery times we are in at the moment. Virgo is a mental sign, and a human sign. It will help those interested restore some reasoning to their thought process. Mercury makes its way in a bit in advance, at 9:30 pm on Wednesday, Aug. 19, which emphasizes the use of logic.

The Virgo Sun will make a series of many trines to planets already in Earth signs. For the first 12 days or so there will be a grand trine in effect, as Uranus in Taurus is part of the mix. The grand trine is about building the momentum you want and the momentum you need to be able to cover the distance you want to travel.

Emphasize the positive. Avoid frustration, resentment and jealousy — you really do have a choice. What you invest in will gain and grow, so make that choice carefully.