While I was deployed to Afghanistan, I was the leader of a small medical team. As a conscientiously spiritual person I vowed to myself that I would lead with integrity and wisdom, that I would follow my internal guidance, and use my heart as my foremost leadership tool. 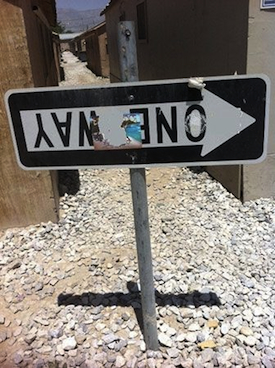 I did just that while I was deployed. It was a disaster.

The military leadership saw compassion as a weakness and my cooperative leadership as poor leadership. Even though the team members flourished, the leadership would not condone my user-friendly guidance.

There was an investigation. I got sent home early, humiliated, my career shattered. My world began to split down the seams.

My long-time spiritual teacher, Jo Dunning, taught me that not only does everything happen for a reason, but everything comes as a gift for my benefit. I knew with all my heart that I was following my guidance and doing the right thing. Why was I getting kicked out of a life-long career?

My entire soul gave a strong middle-finger salute to God at this point and asked, “What the fuck?!”

I began to ask for help. I never ask for help, but ask I did. I hired a lawyer to champion me. I requested aid from angels, ascended masters and gods of all religions. I prayed, did energy work, used tarot, astrology, magic, oils, candles, mantras, meditation, even banishment spells. The more I asked for help, the worse the situation got.

I remembered that back in 1998 I received an astrological reading from a divinely gifted astrologer named Eric Francis. My chart spoke through him as he interpreted. He said that I was born during an eclipse, which brings a sense of destiny. I realized that part of me already knew that. He also said that I should get out of the military — that I didn’t belong there. I should have listened.

The sensation of no longer belonging kept happening. I remember back when the troubles started in Afghanistan; one particular emergency resuscitation in our trauma bay comes to mind. I was looking at the patient, writhing in pain from bullet wounds as we were sticking needles in him. A mystic calm enveloped me from the barbaric treatment. While in this bubble, I knew there were other choices. My entire being down to my bones knew: there is a better way.

Barbaric torture is not health care. There is a higher-order way to do health care waiting to be recognized. I knew with all my being that we should be able to lay our hands on the patient, speak certain words, play certain music, vibrate certain frequencies, shine certain lights, or wave certain crystals, and the person would be instantaneously healed.

All the spiritual teachers, wise beings, and prophets are saying that now is a time of great change; that we are ascending to the fifth dimension. I began to ask myself what exactly that might look like. How would I know if I were enlightened?

If an old paradigm is shifting into a new paradigm there has to be a point at which the two are merged so close together that it looks like a convoluted chaotic mess. There are two pieces of music being played at the same time — and the noise is deafening. I feel like I am bouncing back and forth across realities. The transition from the old here to the new here is kicking my ass.

The first astrological book I bought was by Isabel Hickey. As a Scorpio, the part that fascinated me most was the chapter on Pluto called “Pluto or Minerva — The Choice is Yours”. She said, “Pluto rules Scorpio. Minerva, goddess of wisdom, rules the highest aspects of Pluto.” She also talked of the outer planets having “higher vibrations” available to those able to respond to those vibrations.

I want to be one of those able to respond to the higher vibrations. Guidance is here — inside me, I can feel it. However, the wide-eyed, desperate search for help from the heavens, the gods, the angels, the ascended masters, the ancient texts, spiritual teachers, healers, energy workers, talismans, or any other external source is moot. They have all failed me. To step across the widening gulf of separating worlds, I must step into my own personal mastery.

Guidance is quiet and patient, pretty easy to ignore. Following guidance takes courage and a trust in the process. I can feel the new world superimposed on the old world. I imagine it like a musical overtone. The now world sings its usual song. The new world re-imagines that song with full-spectrum overtones for the awakening listener. Both are here, in the same place, at the same time.

We hear what we listen for. The higher song of my heart calls me to follow higher love in every moment. Habit, laziness, fear and social programming keep me choosing the status quo.

Tectonically slow maybe, but the separation of worlds is speeding up, becoming more tangible, more visible to the naked eye. Choosing sides is now essential. Choosing seems huge, but it is the little moment-by-moment decisions that make the biggest difference. The glazed-eyed zombie apocalypse happening in the workforce, the escapism of flopping on the couch in front of the television or hypnotized by video games are all avoidance of the choice. Choosing to notice the living is a start.

Acknowledging the huge, multi-dimensional expanse of my true self is daunting. To be that self without god, religion, social programming, parents, or bosses making my decisions for me is terrifying. But that is where I belong. Instead of the limited perspective of my own pain, I choose to embrace the entire cosmos.

I tried to control the cyclone by changing the spin, but of course that just left me dizzy. The masterful choice is to see the cyclone as part of the spin of the universe and embrace it. With that broader perspective comes calmer internal weather.

I don’t belong in the smallness; I belong here — in the crazy, wild, everything of the cosmos.

Diana L. Hay is a Registered Nurse in the military and an energy work practitioner in several disciplines. She lives in Tennessee with her family and four delightful pets.