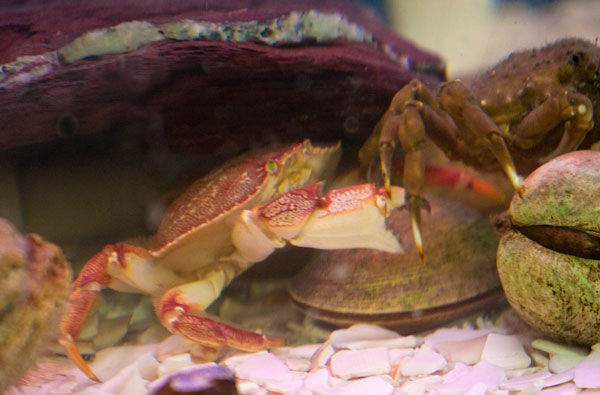 Look at sea critters long enough and they start to look like they're prancing around the set of SpongeBob. That's exactly what happened with Stephen Hillenburg, the creator of the animated series -- he started as a marine biologist and became a cartoonist. These two crabs inhabit a purely-for-fun 55-gallon local specimen tank at the East Hampton shellfish hatchery (see prior post). A rock crab (on the left) is 'defending' his abode from some other kind of crab. Check out that claw. The dispute was resolved amicably. Photo by Eric.

Tomorrow — we will visit the former home of John Steinbeck, and take a look at his chart.

Neptune in a Flask 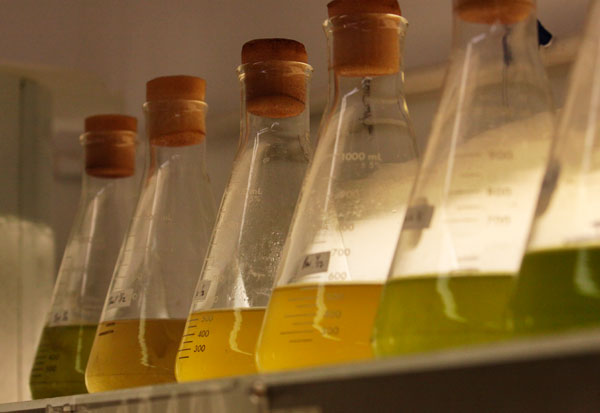 Grow room by the Sea -- Algae stock grows in Erlenmeyer flasks at the East Hampton Town Shellfish Hatchery in Mondauk, NY. The algae provides microscopic food for infant oysters, clams and scallops (while they're in the larval stage). In the next stage, the algae cultures are moved to much larger vats where the algae blooms under natural light. Photo by Eric Francis.

When I was studying marine biology at John Dewey High School, I heard of this place called the New York Ocean Science Laboratory (NYOSL), out in Montauk — at the far end of Long Island’s south fork. That always seemed perfect — to have an ocean science lab out here on the far-flung edge of the North American continent, more than 100 miles out into the Atlantic Ocean. All kinds of complex aquatic systems exist around here — besides the ocean itself, there are inland lakes and ponds, streams, bays, harbors, wetlands and islands.

I’ve looked for the lab many times on the ‘Net and I’ve never been able to find it — and I learned why today. The New York State Legislature cut its funding in 1979, before the Internet existed. So, it never had a website or a web presence of any kind, and there are few references to its existence. Even asking the locals, most only seemed to have heard of it.

END_OF_DOCUMENT_TOKEN_TO_BE_REPLACED 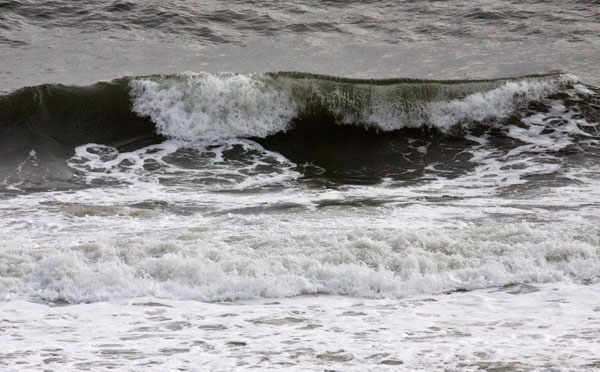 Nothing is planned, by the sea and the sand
— Quadrophenia

I often forget one of the things that I love the most being near the ocean, which is the ability to see to the horizon. I’m staying out in Montauk for a while — this place at the very tip of Long Island, and looking out at the edge of the world. I’m also listening to waves.

I figured out the other day that what we see as waves reaching the shore is the expression of energy that has traveled far across the planet to get here. Waves, at the shore, seem like something that is unique to the shore, but they’ve come a long way.

The way the eastern coastline of North America is laid out, New England extends 100 miles or more than the rest of the East Coast, and I’m at the southern edge of that. If you were to travel in the direction of the photo, you would reach Santo Domingo (properly, the island of Hispaniola) in about 1,200 miles. Looking to the southeast, the next stop is Morocco, diagonally across the Atlantic. So we are on the wild coast here.

END_OF_DOCUMENT_TOKEN_TO_BE_REPLACED

What’s up in space: Dragon makes a splash

I always wonder about the astrological influence of solar storms. There are a lot of them these days, and we have a friend who tracks the issue so I’m constantly getting updates. She’s aware that if one of these things hits the power grid just right, we could have a rather large blackout. This must influence our gadgets somehow — and our brains.

Space News reported: “Solar protons accelerated by this morning’s M9-class solar flare are streaming past Earth. On the NOAA scale of radiation storms, this one ranks S3, which means it could, e.g., cause isolated reboots of computers onboard Earth-orbiting satellites and interfere with polar radio communications. An example of satellite effects: The ‘snow’ in this SOHO coronagraph movie is caused by protons hitting the observatory’s onboard camera.”

Gee, I was wondering what all that stuff flying around the frame was. I didn’t think it was UFOs and that’s way too many bits to be comets. I have a buddy who is a hardcore deep space photographer, who has to deal with those bits of energy all the time because of the kind of work he does. His name is Anthony Ayiomamitis (and you will love his website). I asked him what influence he thinks solar ejections (CMEs) might have on consciousness. Here is what he said.

“CME’s are something very serious and powerful. You are literally seeing the Sun eject its mass and which helps seed the solar system with particles which lead to the ionization of elements in our atmosphere and, hence, for auroral activity.”

He added, “If something gets really out of hand in relation to CME’s, there are some very serious consequences in relation to satellites in orbit and/or electrical grids around the world. There was a nasty incident in Quebec (Canada) where the entire province had a black-out due to a massive CME about ten years ago. With satellites, it can literally wipe out their electronics.”

END_OF_DOCUMENT_TOKEN_TO_BE_REPLACED

Of Dragons and New Year

I was watching a PBS special last night that morphed a profile of Hong Kong with an exploration of the Dragon as a symbol. As you may know, the Year of the Dragon starts Monday with the Aquarius New Moon (additional coverage here). I have long been a fan of dragons and of being born in a Dragon year, though I didn’t look in detail at the symbolism. The program, which I’m not finding easily but I’m sure it’s available, made the point I’ve always noticed — of the 12 Chinese animals he’s the one who “doesn’t really exist.”

The segment described how the Dragon is composed of a morph of the whiskers of a catfish, the claws of a bear, the body of a serpent (though with scales), and a diversity of other best attributes that give him a fearsome strength. The Dragon is a blend of Yin and Yang energies — the scales are evenly distributed with these energies.

In the East, he’s considered the benefactor, the one who stands guard over good fortune. In the Western world he’s been reduced to a shadow of fear, with our terms like “slaying dragons” meaning to get rid of deep issues. Even in The Hobbit, the dragon is presumed to be evil and is killed. The Dragon appears throughout Chinese culture in his role as proector and guardian. I was vaguely aware that people in Asia would plan to have their children during Dragon years, which says a lot about how much respect this supposedly imaginary critter has.