I turned fifty in 2012, some months before the prophecies for ‘The End of The World’ (as we knew it), were due to kick in. Being the hopeful type I felt excited at the prospect of a paradigm shift and my part in it. The world and mainstream media, however, painted a different picture: as a woman of ‘a certain age’ I was approaching invisibility and impending retirement. 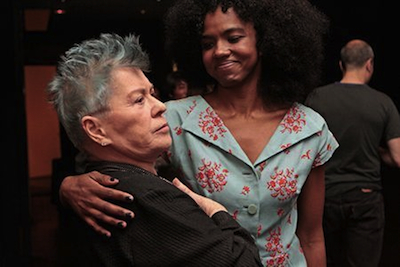 The endless rampant consumerism, ecological suicide and perpetual war seemed to go on its not-so-merry way.

In a world that worships youth and the next new thing I could succumb to feeling irrelevant. Yet I keep coming across vital older and elderly women who are wise, inspiring and contributing positively to the story of our world.

One, numerologist Gail Minogue, claims that:

…offstage, waiting for the spotlight, are the middle-aged women…Everything is cyclical. We have not visited the importance of middle-aged women for about 200 years so we have little reference to this phenomena. This phase of power for this group will last until 2044 (starting 2024) so it is a long run and will have women in their 40s, 50s, 60s and 70s running the financial systems, the political systems, the social and cultural systems and the general well-being of our society.

If she is right, then women need to get ready to (re)claim power and authority, not as monstrous ‘Maggie Thatchers’ (i.e., taking on ‘masculine’ attributes) but as leaders, curators, storytellers, filmmakers, CEOs, mentors, elders and paradigm-bridgers who can inspire and nurture future generations.

The Good Book says that without vision the people perish, but the current vision of parasitic corporations, sociopathic puppeteer politicians, mindless military/police, and a populace without privacy or freedom is not one that serves humanity, but a disparate elite who fail to realize that we are all connected. These visionaries may well be the Women of Chiron, the wounded healers who have lived forgiveness and been transformed by pain.

There are too many women who lose their vision and sense of purpose as they age. I know many who would have once been called ‘spinsters’, some desiring to be in a relationship, others glad not to be, but all questioning their place in the world. We need to be reminded of how much we have to offer, and not be seduced by marketing that would have us compare and compete and compel us to carve up our faces into the neotenous masks of plastic surgery. It is a futile resistance. The media constantly exacerbates our fears of being discarded because we are no longer childbearing, no longer desirable, and therefore of very little value.

But we have much to offer. We do belong here. We must begin to recognize the beauty of the lines and scars that tell our stories. We must begin again to value life experience, wisdom and character. We must champion the elders and their wisdom — before it is too late.

The older woman particularly needs to think bigger and bolder, to dream again, and place a new value on who she is and why she is here. “… The future belongs to a very different kind of person with a very different kind of mind — creators and empathizers, pattern recognizers … These people — artists, inventors, designers, storytellers, caregivers, consolers, big-picture thinkers … The Conceptual Age,” writes Daniel Pink, in A Whole New Mind: Why Right-Brainers Will Rule The Future.

Surely that includes the experienced female, humbled by life, yet full of empathy and understanding?

After the beauty and sensuality of the maiden, the nurturing aspect of the mother (caregiver, consoler and the first storyteller a child hears), there is the crone archetype. In her positive aspect the crone is the healing midwife and the wise grandmother whose knowledge is sought out to guide the collective through transition.

During the Middle Ages and the Inquisition the power of these women was feared and the image of a wise woman became the wicked witch and the ugly hag of children’s fairy tales. In mythology you will find the crone goddess in abundance, from West Africa with Asase Yaa (goddess of the womb of the Earth from which we are born and to which we return), to the Celts and Macha (the wild woman who battles against injustice to women and children).

Too often in thousands of years of patriarchal history women have felt disenfranchised. But it is the loss of the wise woman tradition that is the most profound. As Frank MacEowen notes in The Mist-Filled Path, “…it is through…honoring once again the role of the hearth-keeper that the sacred standing of women can be restored in our culture.” For she is no housewife but, “…a true keeper of the flame of life itself who rekindles enthusiasm in the discouraged, who strengthens the despairing,” according to Noragh Jones (Power of Raven, Wisdom of Serpent: Celtic Women’s Spirituality).

Take the biography by Neale Donald Walsch, The Mother of Invention: The Legacy of Barbara Marx Hubbard and the Future of YOU, where he states that he doesn’t have much time left, and “will not waste it on writing just another good biography, unless it had something important to tell the readers. This biography of Barbara conveys her life wisdom and her futurist visions in a way that the readers can learn and apply in their own lives.”

Her precepts might not appeal to everyone but you recognize that for a woman in her nineties, her vitality and encouragement of people to evolve consciously is archetypally the crone in action.

So I turned fifty and celebrated with a big party where I performed an invocation and blessing I had written (as you do) inspired by Mayan indigenous wisdom, and the notion that Time is Art / Life is Art. I was also setting the intention for myself, a reminder that I too must walk the walk. How could I encourage my children to follow their bliss, to trust in a perfectly unfolding universe? Unless I too turned away from things that no longer served me, including ways of ‘earning a living’ that did not enthuse or enliven me.

The last stanza of the invocation intoned:

Being who you are fills every necessary place in the universe. You are enough: your flesh is a poem, breathing your prayer. Everything in the universe is perfect. The Earth is a Living Work of Art and you are the artists. In this epic moment on earth from tribal creature to planetary organism, align with possibilities yet to be composed. You are invited into the realm of synchronicity.

We must reclaim our power and encourage others to claim their individual sovereignty and a future filled with hope and creativity, a complete antithesis to the dystopian nightmare that the old guard would inflict upon us.

When older women who care make a commitment to their destiny and believe that they do belong here and have an important purpose to fulfill, they could become the catalyst in birthing a better world. Like the midwives and keening women of old, it is the elder wise woman who will help birth the next stage of the evolving human being. As the author of the Goddess Guide website puts it, “Today as more women live longer and take more prominent roles within society the tide is starting to turn as they start to reclaim their power.”

Could we be the tipping point that will spiral humanity off into a future on the fringes of our imaginations? Arundhati Roy’s life and words will continue to inspire me in the dark times that we all go through: “Another world is not only possible, she is on her way. On a quiet day I can hear her breathing.”

Gaia is on our side and we are the midwives of a different kind of infection — the joyful determination to release the true potential of humanity.

Elizabeth is a writer, actor, performance poet, teacher, partner, mother, sister and daughter. In 2015 she is leaving her home of 30 years in a small town in Australia, and heading for a small chalet, off the grid, in the Highlands of Scotland — where anything could happen.