Libra has been one of those seasons with five Tuesdays. I don’t issue the first monthly horoscope until the first Tuesday that Sun has ingressed the new sign, so I’m here with a brief letter telling you what I think you need to know about this week’s astrology. 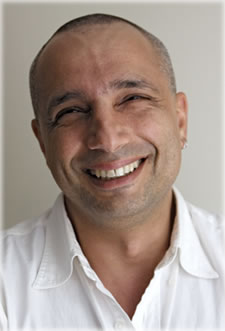 The Sun is in the last degrees of Libra, still close to its position at the New Moon on Sunday morning. We have a fairly long phase of the Sun void of course this week; in my reading it will not be making new aspects to anything in the way of major planets or asteroids until it ingresses Scorpio at 2:44 am ET Friday; that is to say, overnight between Thursday and Friday, or Friday morning, in most time zones in the United States, the UK and Europe.

The Sun void of course till then suggests that a cosmic door is open on the worldly level of our affairs; that we can encounter unusual changes or developments. In my experience it’s a door to the unlikely, which we need to watch (like any door) and invite in who and what we feel is healthy for our growth, environment or community. There is a risk involved. There is also an element of timing, as in, do what you can, while you can. Interesting opportunities are available, and there’s also a sense of drift that makes it wise to coast a bit rather than push.

This is occurring while Saturn is on the threshold of Libra; it makes its first ingress to that sign on Oct. 29. I suggest you hold back on making important changes or initiating new developments until this ingress occurs; and see if you can feel the difference when it does. There will be plenty of leverage in that moment — Saturn will be in its new sign, applying in its square aspect to Pluto.

Lately I’ve taken up a new interest in doing my best to make sure that people who are either new to astrology and curious, or who have been studying for a while and can’t get it out of their heads, have a way into the work. The easiest thing to follow is the Sun/Moon cycle. This takes you through the lunar phases; the sign changes of the Moon; the sign changes of the Sun; and the seasons of the year. Everything else in astrology mimics these cycles. The only exception is that planets go retrograde but the Sun and Moon do not; but the Sun and Moon do other things that you can tune into and these will give you a sense of what retrograde energy feels like.

For instance, the Moon is waxing right now; the energy is building. It’s also slow right now, and slowing down even more (this is the equivalent of the Moon being retrograde). That means it’s far from the Earth and proceeding through the degrees and signs more slowly, and that the energy is building gradually. Even if you grasp astrology on an intellectual level, you won’t be able to read a chart until you can feel the energy to some real extent. This, we do with some of the same sensors that allow us to feel the seasons changing. 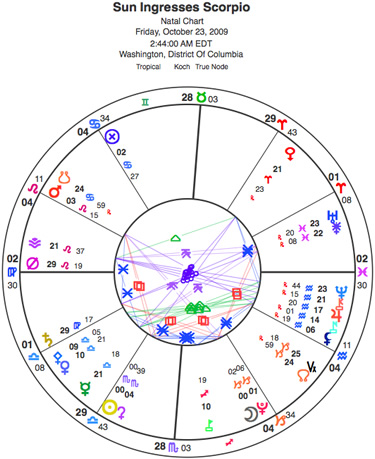 Speaking of, the Sun’s ingress into Scorpio is the peak of autumnal energy here in the Northern Hemisphere. From there it’s just two weeks till the high sabbat of Samhain (pronounced sah-wen), which is what became Halloween in our culture. We can feel this because the weather many places is indicating that this is the season; but there is something else on what you might call the psychic level that gives another clue: the thinning of the veil between the worlds. Here’s how you can play with that — see if you can dial in your favorite relatives who are no supposedly longer among the living. Talk to them, or better yet, listen into the ethers; look at some old photos; basically, say hello and feel for the reply.

The Sun’s Scorpio ingress chart is pretty interesting. Take a look at the Sun and the Moon; their glyphs are obvious. Both have values near zero, which means they’re at the very beginning of their trip through a sign. The Sun is at 00 Scorpio 00 and the Moon is at 00 Capricorn 02, about to make a conjunction to Pluto (that little red thing; the Moon is moving toward the right). This also means the Sun and Moon are making an aspect — they are exactly 60 degrees apart, and that’s called a sextile. There are many other aspects in this chart, but the Sun and Moon changing signs within minutes is pretty cool.

Now, now do we interpret this? It all depends on the context — all interpretation is context-specific. Currently, since there is no question on the table, your context is my brain! Sun Scorpio brings in passionate, transformative and sexual energy. Moon conjunct Pluto can feel deep, isolated, lonely or generically intense. It is also truly introspective and draws its strength from the inside out.

To me, the core question is something about guilt, how it rules our lives an what we do with it. Why do I say this? Any time you have a lot of Capricorn in a chart, and a lot of sexual energy, it’s a good idea to check out the role of guilt. It runs our lives and from a young age is injected into our veins like embalming fluid. I think that what we describe as being spiritual as opposed to religious involves replacing guilt with love. Most people forget that they are innately biological and most of what they’ve been conditioned to feel guilty about is their own biology.

On this note, I would point you to two daily entries this week — one on The Secret Life of Mother and another on Ecstatic Childbirth. Both have sparked some interesting conversation, as is often the case out on the front page.