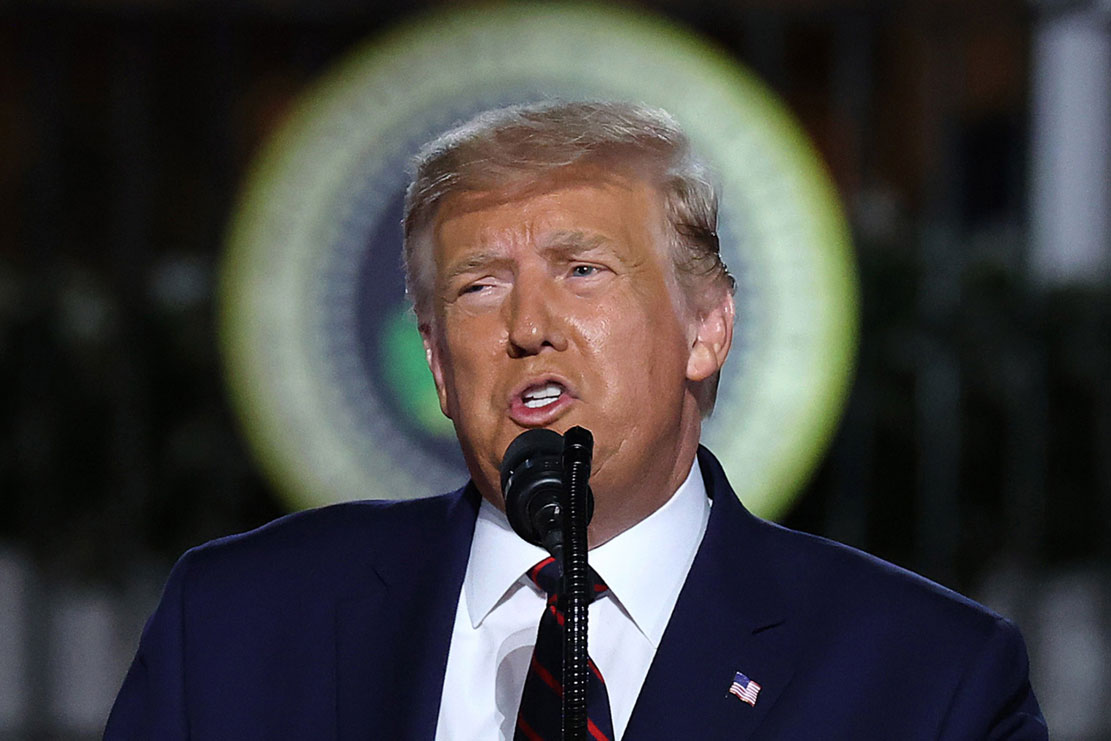 from The Wall Street Journal

SALT LAKE CITY (AP) — Pres. Trump offered Americans a number of promises last night during a campaign speech in Utah, saying the economy would continue to be strong, Mexicans would finally stop taking our jobs, and that the police would be fully funded.

To make the value proposition complete, Trump ventured into unusual territory for a president or presidential candidate: he made the commitment that three Russian girls would urinate on every American some time during his next term.

“We can’t get to everyone all at once, there may be a little delay. But I promise you, while I am president, three Russian girls will pee on you,” he told the crowd, which erupted into cheers and applause as he said the words. The ovation went on for nearly five minutes until he silenced the crowd and went on.

“There are a lot of beautiful women in Russia. If you’ve never been there, you have no idea. It’s just unbelievable. It’s unbelievable,” he said. “And if I am elected this November, three of them will piss all over your naked body and even your face if you’re into it. So you get a little in your mouth. You’ll find it exciting. I mean it.”

He paused and strutted around the stage in a self-congratulatory moment. “Not one, not two, but three gorgeous Russian girls will give you simultaneous golden showers. And you will love it. You will love it. Some people will even get to have four or five of them. No promises but that’s what will happen.”

The crowd in this normally conservative and religiously-oriented state rose into such an uproar of approval that photographers and cameramen were seen holding their ears. As the crowd stamped its feet, the buildings’s maintenance engineer said he hoped the arena would hold up under all the stress.

James Carville, the political strategist who got Bill Clinton elected to his first term in 1992, said this would be a winning strategy.

“He’s struck the right tone, and he’s touched on something Americans need and want, which is to be pissed all over by several different Russian hotties at once,” he said. “I wish I had come up with that. It’s historic.”

Speaking on his national radio program last night, Rush Limbaugh, the recipient of he Presidential Medal of Freedom, approved whole-heartedly. He predicted the president would win at least 47 states in November. “This is really going to resonate. Americans need that glorious feeling, and there’s nothing like three gorgeous young Russian ladies to deliver it to them.”

“Finally, an issue that can unite Republicans and Democrats, liberals and conservatives, red states and blue states,” said George F. Will, columnist for The Washington Post. “The United States has been divided for a generation. Now, we can come together under this common sense proposal that will get the nation back on track.”

The ultra-conservative Business Council of the United States said it expected this project to drive economic growth for the next decade. “We’ve been waiting for an idea like this,” the council said in a statement. “We know a winning idea when we see one.”

“You’ve heard of the Green New Deal,” said Mitch McConnell, the senate majority leader. “Well, this is the yellow one. Let the people decide!”

World markets surged by an average of three points at the opening bell on Wednesday, and traders said they were so excited about being peed on that they bought up a lot of issues related to getting pissed all over, including Adam and Eve (AAE, up 2.4%), Good Vibrations (GVB, up 4.1%) and Babeland (up 3.1%). The S&P 500 overall ticked up 1.7%, suggesting that the benchmark may notch another all-time high.