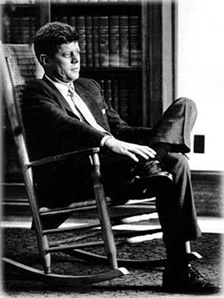 IN FRIDAY’S edition I said that Uranus entered Virgo after the assassination of JFK. The more accurate guess would have been, it did not. Rather, Uranus first joined Pluto in Virgo in 1961, at the height of Camelot.

This article contains the details of key 1960s events, including the dates of Uranus, Chiron, Neptune and Pluto making their ingresses to Sixties positions. For anyone who may have noticed the error and those curious who are looking for an entrée into astrology, this list will provide some interesting insights. Tracking historical events against lists of dates such as this is always informative. Remember that the exact dates may be meaningful, and the season of the event will likely be more meaningful.

A good example is the Saturn-Neptune opposition of 1971-1972, timed synchronously with Watergate, the Nixon campaign for the 1972 ‘election’, and most notably, the Pentagon Papers. This is an excellent example of how ‘big astrology’ can synchronize closely with major events in history. Saturn and Neptune entered Gemini and Sagittarius, and soon after made their first opposition June 25, 1971. Dates given for publication of The New York Times series articles exposing the Pentagon Papers and thus the truth about Vietnam, from Wikipedia, are given in this excerpt:

Most, but not all of the Pentagon Papers were given (“leaked”) to Neil Sheehan of The New York Times in early 1971 by a former State Department official Daniel Ellsberg, with his friend Anthony Russo assisting in copying them. The Times began publishing excerpts as a series of articles on June 13. [1] Controversy and lawsuits followed. On June 29, U.S. Senator Mike Gravel of Alaska entered 4,100 pages of the Papers into the record of his subcommittee on Buildings and Grounds. These portions of the Papers were subsequently published by Beacon Press. [2] The full papers have never been published; they are locked in the classified vault of the LBJ Presidential Library.

The Papers revealed, among other things, that the government had deliberately expanded its role in the war by conducting air strikes over Laos, raids along the coast of North Vietnam, and offensive actions taken by U.S. Marines well before the American public was told about the actions, and while President Lyndon Johnson had been promising not to expand the war. The document increased the credibility gap for the U.S. government, and was seen as hurting the efforts by the Nixon administration to fight the war.

Please note there is no Monday horoscope today. Normally it would have been Lemonade horoscope, but due to, yes, schedule changes associated with Spiral Door, there was none for February. We will be on a normal Monday horoscope schedule for March.

And now, the Sixties.

Oct. 20, 1956 (Saturn is in the first degree of Sagittarius exactly conjunct the North Node, and the Moon is in the discovery degree of Chiron; Chiron itself is pretty close to its current position in Aquarius)
Jan. 16, 1957 (retrograde back into Leo)
Aug. 19, 1957 (direct ingress back into Virgo, to stay)
(on Oct. 5, 1971, Pluto makes its first ingress to Libra, and on July 30, 1972, Pluto entered Libra to stay, exactly opposite the Moon at the Aries Point and in a close square to Jupiter in late Sagittarius)

March 26, 1960 (direct, first ingress)
Aug. 19, 1960 (retrogrades into Aquarius)
Jan. 20, 1961 (JFK inauguration day, direct ingress back into Pisces, to stay)
(on Apr. 1, 1968, Chiron enters Aries for the first time, and makes its final ingress on Jan. 30, 1969. Also note that during the 50s and 60s, Chiron and Uranus are making a long series of oppositions, basically moving at close to the same speed and opposing one another again and again as they move through the signs. Hence everyone born in this long era has a Chiron-Urnaus opposition in their natal chart.)