This week is a fine example of just how intriguing the astrology can be; how many choices it offers us; and potentially, how strange and indeed how amazing things can get. 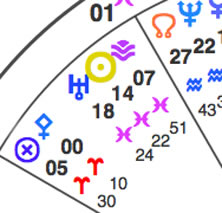 This is the third Mars-Pluto opposition in this concentrated cycle, and when you have a series of oppositions like this, you get a process, both psychological (inner) and historical (outer).

As I have mentioned before, this is the Mars-Pluto opposition that happens in direct aspect to the Aries Point (the first degree of Aries). And wouldn’t you know it — Pallas Athene, a beautiful, potent asteroid — one of the first four — just showed up exactly in the Aries Point last night as well. So we have a planet personifying the Aries Point, the Goddess of Pallas Athene, who represents strategy, law, and protection.

The next aspect also includes an outer planet — a New Moon conjunct Uranus, in Pisces. Indeed, conjunct Uranus and a lot of asteroids, such as Bacchus and Child. I’ve written a lot about this one, such as in last week’s edition. The tone is high-vibration, and this setup is full of surprises.

No doubt you can feel the energy pulsing. If you happen to get in a face-off with someone, try NOT going blow for blow. Step back — see the psychology — remember you’ve been through this before, and take the high road. Right now, I assure you, anything is possible, if you have a little perspective and the willingness to have it be so. The key is, be direct, and honest, but not aggressive or needlessly confrontational. There is plenty of energy in the planets; we just need to move gently with it.

The news accompanying this promises to be pretty interesting as well. Notice that today is the final primary face-off in the Democratic nomination process, a kind of second Super Tuesday. This is potentially a huge moment in the history of our country. And yesterday, we had what I am calling the “Street of Dreams” fire, a fire of luxury homes in the Seattle area that is being labeled “domestic terrorism.”

This, my friends, is precisely the kind of issue you have to watch. Like the old joke goes, “So how do you make a flood?” This is to say, it’s easy to make a fire. Anyone can paint a sign.

We’ll be watching this weeks news developments and the astrology carefully, and get back to you Friday morning with a report.

Aries (March 20-April 19)
You have it in you to take a refined, well-planned approach, both to your life as a whole and in particular to a professional question whose time has come. Please don’t make the mistake of thinking that the step you need to take involves some kind of worldly recognition, however. Nobody can give you anything you don’t already have. The situation or perhaps imminent crisis involves taking the more meaningful step of becoming someone you’ve been reaching for inside yourself for a long time. The progress you make this month depends on the confidence you allow yourself to feel. Nothing is stopping you, but only you have the power to take the first and most important step.

Taurus (April 19-May 20)
Your friends are pulling for you. Do you believe me? Or are you having difficulty understanding why anyone would go out of their way to support you? You may feel like you’re not in a position to give the things that people want most. If there’s an element of truth to that, don’t take it as a mantra. To the contrary, work to understand the positive role you play in the lives of those who care about you, and consciously respect what you provide. If you make a point of seeing your worth to others — no matter how challenging that may be — you will come a long way toward realizing the kind of self-respect that has been missing from your life for so long.

Gemini (May 20-June 21)
How strong is the foundation you’re standing on? Is it strong enough to support the many ambitions you are building on top of it? The emphasis seems to be leaning strongly toward the outer world, when several key factors in your solar chart suggest you need to be building on the inside: your emotional space, your kitchen, your bedroom. Look around your house. What words would you use to describe it? What qualities does it possess? Your real work is at home, no matter what success the world is bestowing on you — and it seems to be offering some pretty rare morsels at the moment. Work from the ground up, from the closets outward, and from the corners to the center of the room.

Cancer (June 21-July 22)
Many factors are now allowing you to take some longer, bolder steps into the world. The winter seemed to be one long negotiation session, but you could only make out every other word. Regardless you made an investment in life, and you got a lot done despite many episodes of imperfect cooperation. You can safely forget about those things now, and take a chance on something more daring. Allow yourself to plan for how your life would be, if things were to go truly well. Most planning involves preparing for contingencies, shortfalls and assorted potential disasters. You have earned an opportunity to write the script of your future on a different basis.

Leo (July 22-Aug. 23)
You’re working your way toward a breakthrough — don’t worry about that. Life has been so complicated lately that you have every right to expect that nothing is ever simple, or ever will be. If you look at where you stand today with the people who are the most important to you, you may recognize that there is indeed something that you can both understand and explain. You are long overdue for some experiences of all that you’ve given out coming back to you, and I mean this primarily on the human level. Money will take care of itself; you have pretty good luck that way. As you know, there are greater rewards in life. Practice being open. Literally, hold the energetic doors inside yourself wide open. Be open; breathe in and receive. Keep doing it.

Virgo (Aug. 23-Sep. 22)
Many people long to be met — that is, to be met face to face, and have their energy matched by a living human or by an opportunity that they deserve. Yet observe what so often happens when that occurs. You are fast approaching such a moment. Life, the universe, the gods or however you wish to characterize them, are lining up to hand you what you want, what you need, and what you believe in. All you have to do is connect, receive, embrace. Or, you can freeze up; you can experience some version of not feeling worthy of, or equal to, what is being offered. You get to decide — though you may not see it as a decision. That would be the first challenge.

Libra (Sep. 22-Oct. 23)
Why do you do what you do? Well, you chalk many things up to altruism. It’s a great motive, as long as its an authentic one. The Oxford English Dictionary defines the word as, “Devotion to the welfare of others, regard for others, as a principle of action; opposed to egoism or selfishness.” Now, this is possible, for one thing, how can a person subtract themselves from the equation of their life? I suggest you aim for taking actions that you are sure have enough mutual benefit for everyone involved. Not necessarily exactly equal benefit, but mutual. You have a heck of a lot to offer right now, and just as much to gain.

Scorpio (Oct. 23-Nov. 22)
The Sun is in Pisces now, and as the month progresses, Mercury and Venus will also arrive in your fellow water sign; your first cousin. Mars is in Cancer, another water sign. For a Scorpio, it really doesn’t get much better, that is, if you have a nice boat to float in, or a beach umbrella to get underneath. Remember, you’re going to be in a deeply emotional mode. To harness all this love, passion and imagination, you need some discipline — and I suggest you get it sooner rather than later. Discipline is another word for focus, and in this sense I mean focus on what you want and need the most, rather than what is expected of you.

Sagittarius (Nov. 22-Dec. 22)
If you forgive yourself for all the persona, inner and unspoken gripes you usually hold in your own face, you’re heading for one of the most fulfilling moments in a long time. The rampant instability in your home looks like it’s finally settling down. The nearly constant sense of not knowing how you feel is bearing fruit — discovering how you feel about someone or something that will stun you in the most pleasant way. This is another way of saying that if you’re absolutely honest with yourself right when you feel the urge to be that way, you will love it.

Capricorn (Dec. 22-Jan. 20)
You can take a vacation this month without taking a day off of work, buying an airplane ticket, or putting more than 25 miles on your car. You’re in one of those cosmic nanophases where you find things; where they find you; where you just bump into what you want and need. None of this is an accident. You are seeing the world through entirely different eyes than you were one year ago, or even three months ago, and this new vision is something you worked for with diligence. Besides work it’s partly the result of acknowledging your actual influence on your environment, and part of it is about not being afraid of yourself.

Aquarius (Jan. 20-Feb. 19)
Gradually you are coming to understand something about yourself, though you might not have the word for what it is. But you are collecting documentation, which seems to be supporting some profound intuition you’ve had for a long time. While you’re collecting facts, don’t tune out the primary source of your information — the deeper parts of your mind, particularly those that speak in images. Indeed, if you want something, find a picture of it, draw it, or assemble it in a collage. There is a difference between fantasy and reality; much of that difference is bridged by constructing a visual representation, and then building on it.

Pisces (Feb. 19-March 20)
If things go well, please don’t expect them to go worse. The only thing that could possibly stop you now is your own tendency toward negative expectations — which, thankfully, you’ve been doing quite well at toning down in recent years. You’ve learned something about trusting the unknown and the improbable. True, you meet the occasional asshole, but notice how rarely that actually happens. Don’t decide for people who they are in advance. Keep your focus and feel the strength of optimism. As the next few weeks unfold, give yourself room to make a series of radical decisions that feed your heart, your soul and your hunger for deep contact.