This thing called 2012 is approaching fast. We’ve got just one more season and we’re there. This is one of the most predicted-about times in human history. I can tell you that there will be a lot of unemployed prophets on Jan. 1, 2013. And I can tell you that the changes that do happen to society will be the ones that were right in front of us — but which we were not expecting. In honor of those changes, and our opportunity to use them creatively, for the next few months I will be using the Tuesday space to write a 2012 diary. [Note, the October monthly horoscope will be published Friday.] 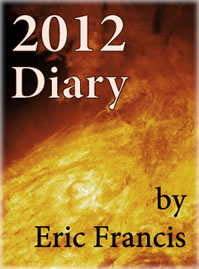 What is the theme of 2012 as I see it? In a phrase, “Everything, All at Once.” We’ve had a few little tastes of that quality the past few years (especially in 2011); yet the story has just begun. This astrology will come in and out of focus, depending on the positions of other planets. It happens to be in high focus today, as the Libra New Moon makes an exact square to Pluto and a close opposition to Uranus. We are in what you might think of as a 2012 microcosm. [To read about that in detail, please check Soul, Form and Fear: New Moon Square Pluto on Planet Waves daily.]

At the heart of this is Uranus square Pluto, which is exact from 2012-2015. It’s been building for a long time and once we know what to look for, we’ll be able to see cultural manifestations going back five years. This aspect will influence you personally; it is affecting all of us. It could manifest emotionally as some form of obsession, the drive to participate, deep introspection — or as fear. One thing we need to learn through the 2012 astrology is how to keep fear, and the people who use it against others, in perspective. Mostly, this alignment is about the drive for progress.

Every change we’ve delayed, every place we’ve been stuck, every aspect of our lives that needs attention, the ways we feel summoned to get involved — all of these will come into focus in 2012, and stay there for at least three years. That’s a lot of material to cover. It will seem to rush on fast, and yet we must use well the time we have.

Many Decisions, Many Variables

A lot of this is about embracing decisions, and allowing for variables. We know how much we delay making changes because one change might lead to another, and another. Yet there seem to be so many variables right now. There is a way to go through this experience without getting overwhelmed, and my intention as an astrologer and writer is to help you see the way to do that.

This Tuesday weekly series will relate directly to the 2012 annual edition of Planet Waves. The annual edition, usually published the first week of January, is where you get your extended overview of the new year (last year’s was called Light Bridge; the year before was called Cosmic Confidential). Our annual is a comprehensive product, which many people depend upon for a bit of perspective and easy-to-understand astrology guidance.

Because of the extraordinary astrology of 2012, I am devoting extra time to doing this year’s edition. This new Tuesday series will serve two purposes: one being to keep you informed about this unusual astrology and related events; and the other being a place for me to create and develop the ideas that you’ll be reading about when the annual publishes in just a few short months.

Big astrological events mean something different to everyone. I will be counting on your feedback, ideas and wisdom to create this annual edition. You can write directly to me by replying to this email.

The Cycle Starting in 1965 Turns a Corner Now

The topic for today is: what is the relationship of 2012 astrology to the 1960s — and why should you care? Let’s take them one at a time.

On Oct. 9, 1965, there was a conjunction in mid-Virgo — Uranus conjunct Pluto. That was the epicenter of what we think of as “The Sixties.” Historians have tried for decades to explain what the 1960s were — and it would help if they had astrology. Let’s just say they were about a lot more than protests. They were a time of monumental change in every facet of life: technology, art, literature and music. The family structure of the 1940s and 1950s was totally rearranged. Sex roles began to change. There was a sexual revolution, with mixed results — but some real impact.

You could say that consciousness itself changed, and we’ve been living with that particular mental vibe ever since. As The Eagles so brilliantly said it, “You can check out any time you like, but you can never leave.” We are, however, about to do something other than check out or leave. We are going into the next phase of that cycle — Uranus square Pluto. It’s taken 46 years for Uranus and Pluto to move from a conjunction to a square. This is like the week that it takes the New Moon to become the quarter Moon, only it was nearly half a century. Think of all that has happened in those years.

When Uranus and Pluto get to the first quarter, the action begins again. It’s actually been happening for several years, but it’s been really obvious in 2011, whether you consider Arab Spring, the volatility of the financial markets, the political chaos, the sense of total overwhelm that is reminiscent of the Sixties. The times we are in will challenge you to be yourself fully, and to live the life that is right for you. Clinging will not work — making conscious and informed choices will work a lot better.

Astrologically, one big difference between the 1960s and now is that the conjunction was in the relatively mellow, intellectual, service-oriented sign Virgo. The square that we are approaching now reaches from Uranus in Aries to Pluto in Capricorn — super-high energy signs that are all about taking action. Uranus in Aries is about a stunning self-awakening. Pluto in Capricorn is about changes to the very roots of our society and its structure. Where the two intersect for you personally is a crucial meeting point. It’s where you need to be focusing your plans, your decisions and your concept for your life, even as everything is changing before your eyes.

One thing that most people don’t understand is that times of change and instability are the moments of the greatest potential. Yes, you have to be gutsier, apply your intelligence, and dare to take a few risks. You could say the possibilities are limitless, though closer to the point is that they are real — and the astrology points us directly to them. More next week.