Editor’s Note: For those following the story of Julian Assange and WikiLeaks, Assange turned himself in on charges unrelated to the document leaks today in a London court. I am developing the story at this page on the Planet Waves blog. — efc

Sometimes you don’t need so much astrology to do astrology. Everyone knows that in the Northern Hemisphere we tend to have very short days around the time of the winter solstice, which is approaching in about three weeks. At the December solstice, the astrological system resets, the Sun enters the sign Capricorn. 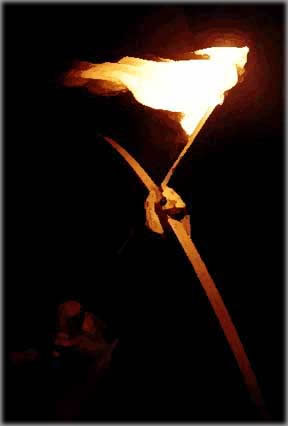 For many people, an utterly mad three weeks these are. There’s the mix of end-of-the-year business with holiday shopping and preparing to either travel, or have guests. People are counting pennies, to do their holiday gift shopping and still pay the bills. You can be the most devout atheist and still get caught in the madness. Then there are the all-but-inevitable encounters with family, which can involve travel and breaking all of your routines.

During these three weeks, the days get ever-shorter. Your body has the feeling that the Sun has disappeared, and the deep and primal part of your brain is wondering whether it will ever come back. For many people, this is associated with seasonal affective disorder (SAD) — that is, depression that is caused by the weather effects of winter, often compounded by other forms of stress.

To keep this at bay, you have many options, though the best one — regular exercise — takes effort and focus that may seem impossible this time of year. Still, if you’re feeling frustrated or gloomy, see if a few visits to the gym don’t turn it around for you. Better yet (or in addition), try using your lunch break for a brisk 20- or 30-minute walk, since taking in direct sunlight through the eyes is known to counteract SAD.

I also suggest you do some research on vitamin D. Everyone who works inside, lives far from the equator or uses sunscreen is likely to be deficient in this substance, which isn’t really a vitamin (it’s a kind of proto-hormone). If you start reading ‘alternative’ health literature, you will see the perspective that current daily allowances are ridiculously low, and there are exceedingly few food sources of vitamin D. Keeping your vitamin D levels right, or even increasing them a little, can have a profound effect on your state of mind. The only way to get it is to supplement or to get out in the Sun. And if it’s dark much of the day that’s unlikely to happen. If you want to do some research, a great resource is a site called Mercola.com published by an osteopathic doctor in Chicago.

Meanwhile, maintaining nutrition will help, drinking plenty of water, and making sure that you take your vices in moderation.

There are other truly strange astrological effects that take place at this time of year, associated with the Sun’s passage through Sagittarius. It’s not merely the holidays and the days growing so much shorter that creates the sense of compression and veritable panic. The Sun is now going past an inter-galactic point called the Great Attractor, then by mid-month it’s passing by our own Galactic Core (the black hole at the center of the Milky Way galaxy). These points can feel like too darned much energy all at once, which we simply cannot process through normal linear means. It’s necessary to make peace with a measure of chaos, and to prioritize what is the most important you, as well as what you feel you must do for others.

Do what you can to de-stress. I suggest you do less, spend less, travel less, and focus on what you truly want to do — to the greatest extent that you can. Some things are difficult to avoid. Others are easier and I suggest you take every vaguely reasonable option to avoid everything you don’t want to do. What we think of as being decided for us often involves decisions we make ourselves; see if you can notice when you get to one of those junctures.

The astrology through the end of the year and into the first week of the New Year is unusually complex; Mercury is retrograde through the last three weeks of December, and there are eclipses that happen on Dec. 21 (on the solstice) and Jan 4. So everything I’ve said here applies double. Therefore, your astrologer says: don’t be a robot. Be human, and take care of yourself before you try to take care of anyone else.

What we typically miss during holiday time is some of the most profoundly introspective astrology of the year. I think that if we focused inwardly, we would be a lot happier. That said, there are other factors that transcend all the static that is currently afoot — in particular two conjunctions that are opening the way to a new world. One is Chiron conjunct Neptune, which is about clarifying your vision for your life. The other is Jupiter conjunct Uranus, which is about feeding that vision with new ideas and information.

I realize that every 20 seconds, cable news is telling us how horrid it all is out there, and how things are getting worse and worse. Yet the solutions that work in your life are not going to involve any law that the Senate passes. Ultimately you will connect with the core energy source in your being that is doing its best to guide your life to exactly where you want to be. So, this holiday season, I suggest you keep the incoming influences positive, and consciously ride this once-in-a-lifetime astrology to a truly creative destination.