Focus in the sky is now shifting to Sagittarius; in particular, the Sun’s entry on Friday, and the conjunction of Venus, Jupiter, Ixion (a plutino), and the Galactic Core on Sunday.

Scorpio has been exciting, if a little complicated for some. Mercury retrograde (which ended Thursday) has framed the two most significant parts of the impeachment of Donald Trump so far.

The House began the official public inquiry on Halloween, the day the retrograde began.

And yesterday, as it ended, we witnessed the most important testimony so far: that of Gordon Sondland, U.S. ambassador to the European Union, who admitted that everyone knew about the dirty deal with Ukraine. He said it over and over again, and he gave details.

Many questioned whether Sondland would take the 5th (meaning, refuse to answer, so as not to incriminate himself). Last week, his previous testimony was proven to be false by another witness, David Holmes, and he was called back before the Intelligence Committee. It seemed he did not want to meet the fate of so many former Trumpeters, i.e., getting thrown in prison for lying to Congress or federal investigators.

In a moment that maybe only Aaron Sorkin could have made up, during testimony on Friday, Roger Stone, the Republican advisor with Nixon tattooed on his back, was convicted by a federal jury of lying to congress and witness tampering. That provided a jolt of truth serum for all future witnesses.

The Group: Lots and Lots of Amigos

The “everyone” in “everyone knew” means everyone. What they knew was the trade-off: pressuring the new president of Ukraine into spreading phony dirt about presidential candidate Joe Biden in exchange for a personal meeting with Trump; and releasing congressionally approved military aid he was holding hostage.

Sondland said that the group who knew included all of the top administration officials: Mick Mulvaney, White House acting chief of staff; Vice President Mike Pence; Secretary of State Mike Pompeo; the other two of the Three Amigos (Kurt Volker, former special envoy to Ukraine, and Rick Perry, the energy secretary, former presidential candidate and former Governor of Texas); the Fourth Amigo Rudy Giuliani (also an engineer of the deal); and of course, The Donald himself, who directed the whole thing.

It was a big “oops” moment the day that Mercury stationed direct, which through my reporting career I have noticed is associated with the truth revealed.

This testimony came from Sondland, who was directly involved in setting up the deal and who was keeping everyone up to date via email and cell phone calls from al fresco cafes in Kiev. There is no going back now.

Republicans on the Intel Committee were reduced to arguments like, “We want the whistleblower,” a reference to the CIA officer who essentially dialed 9-1-1 to report the bank robbery, or claiming the whole proceeding was less fair than a witch trial in Salem (yes, Republican loud mouth Devin Nunes actually said that).

One of the most exciting bits that came out was that Trump didn’t want an investigation into Joe Biden’s son Hunter; he just wanted an announcement, which likely would have come on CNN. He wanted something he could spin on Fox News: Biden is under investigation. The lie also included how Ukraine would “investigate” how it was Ukraine that meddled in the 2016 election — not Russia.

I reckon Sondland will not be charged with lying to Congress, which he clearly did previously. We are still waiting to hear from a great many officials who have defied Congressional subpoenas. They will have to testify or be charged with obstruction of Congress. We are all waiting for John Bolton, the former national security advisor, who called the whole thing a “drug deal.” And we are waiting for Mike Pompeo, the current secretary of state, a kind of drug kingpin in the current scenario.

There are no more witnesses scheduled before the Judiciary Committee, and the Democrats may not want to enter a legal battle with Bolton or others. However, they seem determined to fight to get key documents from the White House and the State Department.

For days we do not publish, I keep everything up to date with commentaries and updates on my personal Facebook feed. There’s lots of good stuff there, and my friends from around the world are chiming in.

As For All That Sagittarius

The Sun ingresses Sagittarius at 9:59 am EST on Friday, Nov. 22. When you look at the Sun (which you can only do during the day), you are facing toward the Galactic Core and another deep space point called the Great Attractor. At night, the winter sky (at least up here in the Northern Hemisphere) has a somewhat desolate feeling as we look away from the core and the local group of galaxies, and into intergalactic space.

Upon entering Sagittarius, the Sun trines Chiron and Salacia, forming a bond between the spiritual attributes of Sagittarius and the healing and sexual maturity elements of the Chiron-Salacia conjunction.

The Congress chart features a number of deep conjunctions that are currently developing. Conjunctions represent the beginnings and endings of cycles, and other significant aspects.

We know that in the background of all of this is the Saturn-Pluto conjunction (a three-time-per-century event). This takes place in less than eight weeks, and will coincide with the impeachment trial before the United States Senate. This is a fitting aspect, as the U.S. is also in its Pluto return, which has never happened before. (Pluto’s orbit is 248 years, so Pluto has not yet returned to its natal position in the U.S. chart. It is now close enough to be in full effect.)

Jupiter on the Galactic Core

More immediate is the last major event of Jupiter in Sagittarius (Jupiter ingresses Capricorn on Dec. 2). Currently, Jupiter is aligned with the Galactic Core. On Sunday, Venus makes a conjunction with Jupiter. It would be a challenge to think of a more optimistic aspect. This blends the tangible, worldly, physically and emotionally grounded nature of Venus with the knowledge and truth nature of Jupiter.

Behind them is the Galactic Core, what I consider the spiritual homing signal of our local cosmic home-base. The core is the center of our spiral island, the Milky Way.

At the center is a supermassive black hole. As one approaches the core, the scene is chaotic; stars are orbiting rapidly, colliding with one another, and the heat and radiation are intense. Conditions at the core lead one to appreciate the relatively placid cosmic weather we experience where we are, 25,000 light years away.

In sum, this is an aspect of illumination — and a rare gem, despite Jupiter’s relatively short orbit of 12 years. For example, the most recent Venus-Jupiter conjunction in Sagittarius was in 1995. (There were two in that year, the earlier one at about 7 degrees and the later at about 20 degrees.) There was a triple conjunction of Mercury, Jupiter and Venus in 1971, also away from the core (at about 11 degrees). So a major Jupiter event on the Galactic Core is itself a generational event.

Yet in the current alignment is Ixion, a planet I’ve been watching since shortly after its discovery. This was one of the discoveries that was being publicized by my late colleague Jonathan Cainer in the early 2000s, and which new discovery specialist Phil Sedgwick has taught about frequently.

Ixion describes something troubling in the human psyche — the impulse to murder, and the squandering of second chances. Ixion was a human and mortal, a king who was in Greek lore the first human to commit murder.

Taken to Mount Olympus for rehabilitation by his friend Zeus, Ixion then plots to rape Hera, Zeus’s wife and queen of the goddesses.

One could hardly come up with a worse idea. Hera creates a decoy — an image of herself in the clouds, which Ixion manages to rape, and becomes father to the race of centaurs (besides Chiron and probably Pholus, who are of a different lineage).

To me, Ixion represents the concept of amorality. This theme has been a troubling factor, at least to my sensibilities, for all the years that Ixion has been moving through Sagittarius and entering the core.

(Note, Ixion was discovered in 2001 in early Sagittarius. It makes its first ingress into Capricorn in late February 2020, joining an impressive grouping there. After returning briefly to Sagittarius in May 2020, Ixion enters Capricorn on Dec. 28, 2020, to stay for many years.)

Ixion represents the morality play of our times. Trump, who has admitted he aspires to be a murderer (of a constituent, on 5th Ave.) and who is widely presumed to be a rapist (based on his own admissions of committing sexual assault), is the perfect representation of Ixion.

Among Trump’s many squandered second chances include basically getting away with colluding with the Russians to mess with the 2016 presidential election.Trump’s now famous call with Pres. Zelensky of Ukraine occurred the day after Robert Mueller, the special counsel who investigated him, testified before Congress. He also has frequently squandered the “clean slate” kind of second chance offered by bankruptcy.

He is now in the intense spotlight of truth and justice, represented by Jupiter and the Galactic Core. Venus is present — the Greek goddess of love and sexuality.

A point called Nephele is also in the pattern, in Gemini, opposite the conjunction. The “cloud” created by Hera as a decoy was actually the nymph Nephele. It’s as if she has shown up as a witness to testify to what happened to her.

Your Relationship to Truth

Everyone knows what has happened in this sordid scenario involving people at the top level of government. For a rare moment, the right thing is happening. Not everyone agrees but is there really such a thing as denial?

How does this relate to any of us as individuals? Well, what is your commitment to truth? What is the risk you will take, to tell the truth, and stand up for the truth, and to call out someone who is lying — for example, lying to you?

To speak what you know to be the truth involves taking a risk. Those who traffic in lies do not take kindly to those who speak up honestly, or who display any honor at all. Yet the fear of reprisal is only one part of the truth equation, and it is often an excuse.

Another side is experiencing what it feels like to exercise your most basic human power — the ability to state honestly what you see, what you feel, and most of all, what you know. This can be frightening, because you feel the shocking reality of your own existence. 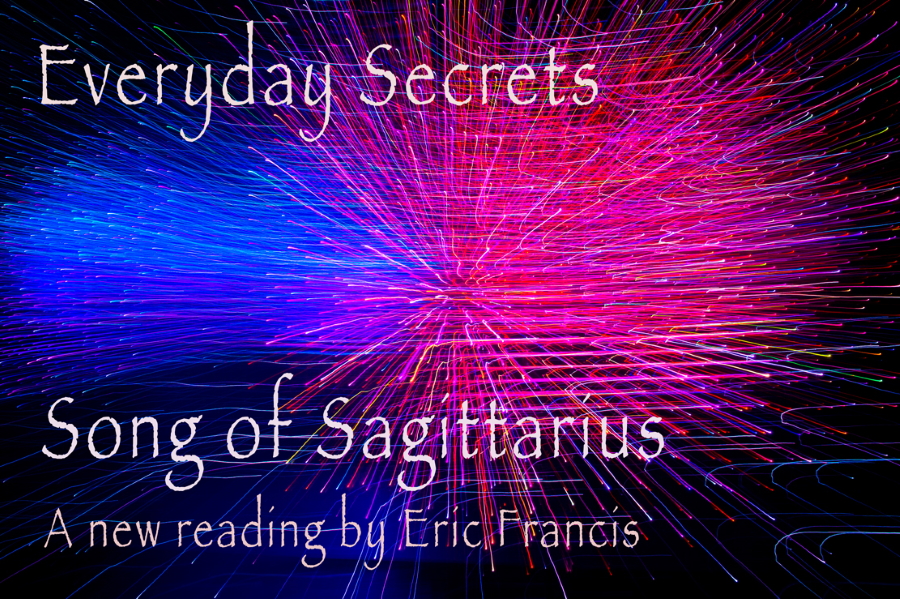 I will soon have the Sagittarius Astrology Studio reading ready. It will cover Jupiter’s conjunction to the Galactic Core, a review of Jupiter in Sagittarius and a preview of forthcoming Jupiter in Capricorn. I will focus on the Saturn-Pluto conjunction and many other exciting facets of your astrology. My readings are easygoing and easy to follow, and address real-life matters of life, work and relationships.

You may pre-order here for $44. Gift purchases welcome.

Thank you for your business.

2 thoughts on “In and Out of Sagittarius”