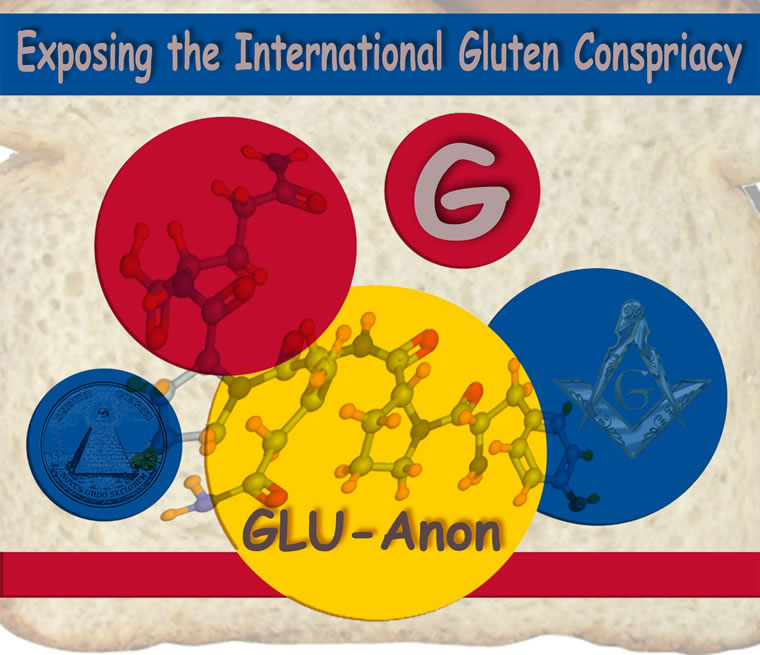 Only We Know the Gluth. Are you ready for it?

This letter contains shocking information, though you may have already suspected certain facts.

My name is Glu. Well, not really. It’s actually more difficult to pronounce. I am a Cordon-Bleu certified executive chef at an important restaurant in Washington, D.C. Some of the most important people in the world eat in our restaurant, and even more important ones eat in the back room.

For obvious reasons, I cannot reveal my identity. Suffice it to say that my job requires a high level of security clearance, because of all the generals, admirals, cabinet members and senators and plumbers who eat in my restaurant.

I am here to tell you about the international gluten conspiracy. Maybe you’ve heard of this. Maybe you figured out it was happening, because you have a gluten-free friend, and it takes an hour to find the right restaurant, and then 45 minutes to order — all to avoid one little molecule that nobody needs.

One little molecule that nobody wants, but everyone can have in abundance, just by randomly eating anything.

What Is That Molecule?

What is that molecule, you ask? That molecole is gliadin, more commonly known as Wonder Bread. Or as pancake batter, or waffle mix, or panini. That’s the gluten you know about. What you don’t know is that there is a vast underground network of powerful men and women, called the Illumapotty. They have been working for years to put gluten into everything.

You may have even asked yourself: why does nearly every soup and sauce have to have gluten? Why do chocolate bars need gluten?

What’s the deal with that? I’ll tell you: they’re trying to kill all of us. It is a sinister plot. I’ll tell you more about that in a little while, when you’re ready to know it. Until then you would not see the simple truth of what I’m saying, even though it’s right before your eyes.

Gluten is a bioweapon. It was first synthesized at the Wuhan Noodle Institute, where its power was amped up significantly using grain of function techniques learned from the Germans in 1933. The gluten we have today is not natural. It is designed to make everyone gluten intolerant. During the Great Bread Struggle of 1934, a resistance movement called the Dinkel Underground successfully fought for lower levels of gluten in all four products.

Who Decides These Things?

Who decides these things, you ask? I will tell you: the Wellington Group. They meet somewhere in the world once a year, and they eat beef with a pastry crust on it, just to remind themselves how it’s possible to put gluten anywhere at all. Why do they do this?

It’s so sick I can barely write the words.

It’s not just that they think of themselves as the upper crust. Rather, they are so boring, they don’t know what to talk about. So they spend the entire meal discussing how flaky the crust is, how delicate, how sublime. But they are brutal killers.

One of their greatest, most sinister inventions was Wondra Flour, which any chef can place into any dish with the shake of a little dispenser. They want to feel powerful. They are actually very insecure. I know many of them personally. I make their crepes.

They cannot stop eating them. At the last Wellington Crepe Breakfast, held at a secret location — the Bloomington Fire Department — they went through 100 pounds of batter. I had five sous chefs all in very rough shape after that incident. All 14 PortaPotties were in use at once.

This is a War Against Satan

Their greatest invention of all was Satan.

That is pure gluten. It’s wheat dough with all of the starch washed away, and all you have is pure molecule. It’s like mollie, only for gliadin. There was a time when mollie was all over the club scene, and everyone on the dance floor was incredibly gassy and having an inflammation response. But hey, it felt good to be so depressed.

Satan can take any form. You can get it in the health food store. It costs more than shrimp. It can seem like meat, which is the demented part: vegans who eat fake meat made from pure Satan. Fakin’ Bacon. Not Dogs. Miracle Burgers. Death Steaks. They are all Satan. But the people who eat them think they are so innocent.

Little do they know they are playing into the hands of the Illumapotty, the most powerful people on Earth. The Wellington Group has been running the world for more than 100 years. Everyone important is in the group, and they all have one thing in common: they eat bread. It’s like their ritual. J.P. Morgan, Prescott Bush, Ayn Rand, Adolf Hitler and Ronald McDonald — they were bonded by dough. The Clintons, the younger Bushes, the Obamas — bread, bread and more bread. Obama would hide in the back of the White House kitchen and chow down on Pizza Hut.

The Wellingtons get together every year and they smear ketchup on buns and eat Satan Burgers. They fly to their meeting on the Wholewheata Express.

When Donald Trump came into office in 2014 (he was secretly president during the last two years of the Obama administration), he vowed to break up the Wellingtons. He vowed to rid society of gluten. He knew the Wellingtons have too much power. They come up with new, clever things to stash gluten into every year. He will keep fighting!

The Wellingtons are evil, just evil. But they are my customers. I am a chef. You know how it is.

Who is President Trump, Really?

You ask, who is President Trump? I will tell you. While he is often depicted with a huge mountain of fast food hamburgers, we know something that the state-controlled ultra liberal, socialist, communist, fascist media refuse to print.

Here is a clue. Let’s see if you can guess the rest. He famously eats an Egg McMuffin every morning. But there is something you don’t know. It’s served on a gluten-free bun. Yes, McDonald’s has a massive warehouse full of them that they don’t release to the public. That’s because Ronald McDonald XVII is a member of the Illumapotty.

President Trump is going to conquer Satan. Every day he is doing secret things behind the scenes to rid the world of gluten. This is very dangerous. The executives from General Foods, General Mills, and General Motors all have it in for him.

They were about to combine forces and produce the world’s first gluten-powered car, but the President stopped them. He has made many enemies.

Do you remember that time when he served a huge mountain of hamburgers to all those athletes? Well, every single one had a gluten-free bun. They were served with gluten-free French fries. Behind the scenes, President Trump has been working to put a separate deep fryer in every restaurant. He knows if he gets his way, the pee tape will certainly be released.

The Gluth is Hard to Accept

I know you probably won’t believe me. These claims seem outrageous. The gluth is hard to accept at first. You may not understand that this is the ultimate battle between good and evil. The final stand between pizza and rice. The long, long struggle between pastina and quinoa.

So now you know how the world works. You know who is in charge and what their agenda is. Now you know that all of this gluten is not an accident.

I cannot say more right now. The world is a dangerous place, but we at Glu-Anon are determined to fight for the forces of life and liberty, so that some day, no person with celiac or even ordinary gluten intolerance will have to say, “Hold the bread on that sandwich.”

You know what I mean.

Yours with honor, answering the call of duty —

PS — You should know something. Joe Biden is on our side. He too is gluten-free. He tries to make himself sound like the guy who will eat spaghetti and meatballs to seem like your average Joe. But the truth is, it’s quinoa pasta. There is hope for the world. It may be a pathetic thin wisp of a hope and a prayer — but there is a little. Just a little. Be strong. Be safe. Don’t be bullied into eating a cookie when you don’t want one.