Introduction to the 2012 Charts

The charts you have in this section are different than the charts I used to write and record your 2012 astrology readings. I include charts for the sake of new astrology students who want to study the planetary dynamics on their own. Here is a glyph legend — though note that Eris in this legend does not match Eris in the charts that you’ve got here. I’ll explain why in a moment. 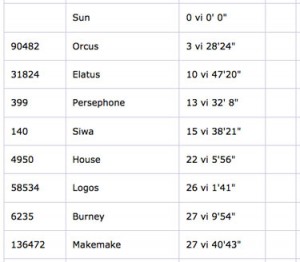 Example of an ephemeris lookup from Serennu,com. This lists all the planets that will be in Virgo at the time the Sun makes its ingress into that sign. You can tell it's the solar ingress becaue of the degree value of the Sun -- 00 degrees and 00 minutes. This is part of a 360-degree sort -- a look at the whole sky, in order of the signs, at the time of the event.

First I’ll describe the ones that I’ve used to write and record your presentations. I use a diversity of different charting methods, but most of the time I run horoscope wheels in Time Cycles Software, a good program for Mac. It has the main advantage of a clear chart display that works well for beginners.

And there is one feature called Io Sprite, which allows for a real time animation of the planets’ places, as well as animating accelerated movements forward and reverse. Io Sprite is also great at finding specific positions and aspects, as long a they don’t involve any of the minor planets besides the first four asteroids and Chiron.

The main charts I used to do your readings were those of the ingress of the Sun into your sign. This is a dependable method for testing the energy and reading the narrative of a sign for the year in question. I also used charts for key events, such as eclipses, the Venus transit of the Sun, Mars retrograde and Saturn ingressing Scorpio. And I’ve been hanging out with the Uranus square Pluto charts for a long time.

As mentioned, the charts in Io don’t give a lot of minor planets. For most astrologers they are not so bad; you get the first four asteroids, the first three centuars, Eris, the major planets and a few odd points. But that’s not enough for the kind of work that I do. For all the other planets, I use Tracy Delaney’s ephemeris tool at Serennu.com. Note that you can sort the planets many different ways. For this project I used 90-degree and 360-degree sorts.

A 90-degree sort focuses on the alignment of all the planets on a particular cross; for example, if the Sun is at 00 Aries, a 90 sort would pick up everything near that degree, and near 00 Cancer, 00 Libra and 00 Capricorn. I use that to scan major aspects to the Sun on the day that it arrived in your sign.

A 360-degree sort tells you what is in each sign, in order of the signs. It’s a way to look at the whole wheel in sequential order. I use that to scan the full contents of a sign on the day of the Sun’s ingress.

The charts you have in this section were cast in Solar Fire, probably the very best commercial astrology program in existence. If there is a better one I don’t know about it. Solar Fire has many options for including the minor planets. Kirsti Melto, our astrology research assistant in Finland, cast the Solar Fire charts for us.

The inner wheel includes the major planets, the first four asteroids, Eris and a few other points. Note that the glyph for Eris is different than the one you may be used to seeing in the charts I publish — we have not settled on this matter, and different software makers use different symbols. Eris in these charts is a little like a black Pisces symbol, but placed in Aries.

The outer wheel includes all of the named centaur planets. I have included them because they are a focus of my astrology research, they are fascinating little critters, and there is a huge stampeded of them going through Sagittarius at the moment. The named centaurs in our charts are:

Some of these have writeups in the Small World Stories listing of planets.