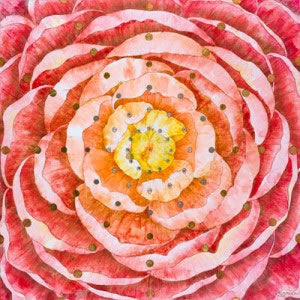 New York based visionary artist, P.C.Turczyn, creates work in alignment with universal evolution: as a support for the healing process, as a visual anchor for manifesting our highest goals and as a link to oneness consciousness.

Ancient teachings and quantum theory teach us that the universe is comprised of vibrations consisting of light, sound and information. P.C.Turczyn sensess that everything carries a unique identifying vibration, somewhat like a genetic code. By using sacred geometry as expressed in nature, light, color, rhythm, sound and intention, she imbues her paintings with vibratory codes to inspire viewers. Icons emerge from spiritual practices related to a metaphysical theme.

Gilded paintings combine copper, gold and aluminum leaf with pigments, mother-of-pearl, abalone and crystals on wood panels. Colorful floral mandalas are executed in gouache on paper and are available as museum quality prints. 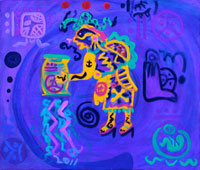 Carlos Cedillo is a Mayan astrologer, musical genius, Mayan Shaman Daykeeper, Author and laughing Buddha who lives in Texas. He is also an artist and his large canvas’ reflect the Mayan culture in bright colors.

Most of Carlos Cedillo’s art uses the Maya and Aztec glyphs and motifs to tell his own stories. He also incorporates into his art icons and motifs from world religions to show their similarity to what the Maya believe. Carlos has always followed both calendar systems equally. He tends to think of the Gregorian calendar and Western astrology as the new “Haab” – the 365 day “vague” solar calendar that had 18 months of 20 days plus 5 scary days called “Wayeb”. More often than not the Maya calendar and Western zodiac horoscopes say very much the same things. New Year’s day of 2012 is 13 Serpent, a time of Cosmic Transformation.

My interest in astronomy is perhaps typical of other amateur astronomers as it dates back to my early youth. Perhaps the germinating seed that initiated a tremendous fascination for the wonders beyond our planet was NASA’s manned space program and, more specifically, the Apollo series during the late 1960’s which, of course, was captivated by the Apollo 11 mission on July 20th, 1969 with the famous “ The Eagle has landed” (16:17:00 UT-4) and followed a few hours thereafter by “ one small step” (22:56:15 UT-4).

It was at that time I began to read everything I could get my hands on relating to astronomy, astrophysics, cosmology, SETI and many other related fields and specialties. Coupled with a very similar and keen interest in science fiction (Star Trek, Isaac Asimov, Ray Bradbury, Robert Heinlein, Arthur C Clarke and others) and photography, the foundation had been laid for something that would last decades.

The bulk of my work is performed at my cottage-villa on the northeast outskirts of Athens where my suburban sky reaches a limiting visual magnitude of 4.0 and which comfortably exceeds 4.5 during mid-winters. For example, Ursa Minor is usually visible in its entirety with/without averted vision; the Milky Way is a beautiful site year-round and an incessant reminder about the richness of the heavens above; and, many of the brighter DSO’s can be seen with little difficulty.

The hunger and anxiety to pursue astronomy built-up over nearly three decades is now being satisfied on a full-time basis as I spend countless hours reading, observing and, most importantly, imaging. I am very determined to exploit the ability of this medium (ie. astrophotography) to capture the many physical wonders which are out there and, yet, our humble eyes are so helpless in perceiving. A mere look through a telescope, any telescope, is sufficient to leave one addicted for life to the magic and aura of the countless and timeless celestial wonders which fill the sky overhead!