Viewing the Venus Transit of the Sun in June 2012

See more photos at this page on Anthony’s website.

It is absolutely critical and vital that readers view the event using protective filters which specifically let 0.001% of the light pass through (ie. ND 5). A very common source for imagers is Baader’s solar material which is available very cheap (ex. an A4 size sheet costs no more than $20 and will cover lots and lots of mini-filters for a pair of binoculars). Also, one can find paper glasses (literally) and where the “lenses” have such a filter themselves. Quite often magazines will include such a pair as a gimmick when such an event approaches so as to sell issues. 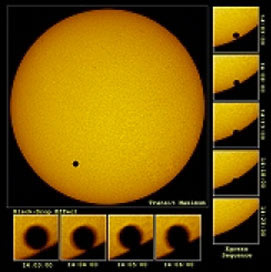 Venus transit of the Sun in June, 2004, photographed in Athens. Photo by Anthony Ayiomamitis.

People also use welder’s glass (#14) and/or exposed film negatives. Personally I would NOT go this route (!) and simply stick with proper solar filters when viewing the sun and/or the transit.

The other side of the coin is the Northern Hemisphere where June is in the heart of summer and the weather has a significantly better chance in doing us a favor. However, the only glitch is that one will catch the transit in progress while the Sun is rising in the morning. Western Europe and further east has the luck in being privy to catching the transit for a second time in eight years, and albeit it will be a partial transit since it will already be in progress when Sol is rising. 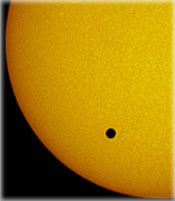 For me personally, I plan to remain in Greece for the transit itself due to exceptional weather prospects we have locally, and the fact I will be able to throw good equipment at the transit without having concerns and problems traveling with it (luggage and weight restrictions with airlines, possible damage to the equipment etc).

If you can live with the transit in progress when the Sun is rising with the huge bonus being the excellent weather prospects, then western Europe, the middle East and Asia are your desired destinations. If you would like to observe the complete event while rolling the dice with the weather prospects, then Australia, New Zealand and Hawaii are your best bets. Of course, you can delay matters as much as possible to see what the latest weather predictions are for Australia/New Zealand/Hawaii and then proceed accordingly where you catch a last-minute flight to Australia/New Zealand/Hawaii if it seems the weather will comply, OR consider western Europe, the middle East or Asia if the weather is bad for the former and favorable for the latter. The west coast of the US is also at play but I suspect it will be during sunset and I must check for you to confirm since I am only guessing.

Give me a few minutes to locate for you a map for the transit showing where in the world it is viewable in its entirety and where it is partial (sunrise or sunset).

With the Baader filter I mention, here is how things look to the naked eye when filtered properly: