This is the latest in my series of short astrology bulletins for Vision Quest, the Planet Waves 2016 annual readings. Last time I covered Saturn square Neptune.

Recently, while doing some charts, I was pondering Saturn square Chiron, one of the defining aspects of 2016. I thought to look back at the first thing I ever read about it. I selected an old edition of Chiron: Rainbow Bridge Between the Inner and Outer Planets by Barbara Hand Clow and took it down to the cafe. (I collect old editions of that book and have just about all of them.) 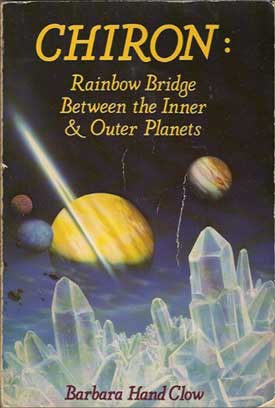 Aah, the good old days, back when you could put crystals on the cover of an astrology book. This work is still in print. I count it as a bestseller (here in the post-Linda Goodman age).

I opened to that chapter and started reading, and it all came rushing back to me: This is the authority issues aspect. It’s a really, really interesting setup because it describes the ways that issues with parents can morph into those with partners, the government and the church.

One theme seems to be switching from one form of authority to another, but not necessarily resolving the question and finding a degree of true independence.

I would say that the goal of that aspect is to use Chiron’s quest for awareness and balance and truly internalize Saturn. That means being one’s own authority, or said more plainly, making one’s own decisions.

For readers living now, the aspect first heats up starting in 1946, through the early 1950s. There are a lot of people born with this aspect. The patterns are hot and high pressure, often involving Mars or Pluto as well. (Equally potent and deeper yet, Chiron square Pluto then picks up the thread.)

The aspect then returns in the mid-1970s. Now it’s back; it will build gradually all year and peak in late 2016 and early 2017. Before we go there, we pass through the initiation of Saturn square Neptune, which is truly the ‘vision quest’ aspect because it will demand so much clarity. The most likely way that Saturn square Neptune will announce itself is as confusion, and if you notice that, then you can take the next step.

By the time Saturn reaches its square to Chiron, one of two things is likely. Either the confusion and doubt of Saturn-Neptune will be resolved through deep personal inquiry; or one will seek out some authority figure in an attempt to have the confusion resolved for them.

Many people end up in the false quandary of anarchy versus oppressive circumstances. In truth, it’s easier either to be confused and foundering, or to be under the thumb of someone (including an idea). It’s much more challenging to establish your own firm ground, your own notion of who you are and what you want; your own sense of what is right for you.

For those who prefer a spiritual paradigm, the question might show up as: who is in charge, God or the ego?

To answer these questions, you would need to peel back the layers of all you were told was supposed to be right for you. And this is just one more way to consider the adventure of our new era of astrology.

In the next letter I’ll say a bit about Saturn’s aspects to deep space points in mid-Sagittarius, and also a couple of key world horoscopes.

Till then, have an excellent weekend.

PS — you may learn more about Vision Quest at this link.

One Response to Saturn Square Chiron: Resolving the Authority Question