The work of the eyes is done. Go now and do the heart-work on the images imprisoned within you. — Rainer Maria Rilke

Grandfather Bernado Sena married Grandmother Tomasa Gonzalace on Feb. 8, 1705 in La Villa Real de la Santa Fé, capital of the “Kingdom of New Mexico.” Had I known this earlier I might have traced the Gonzalace family, but while I was ferreting out my matrilineal tribe, abuela Dorotea Maria Sena, born in 1844, showed up first. 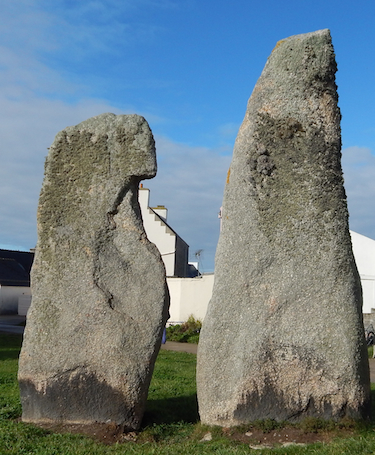 I thought I’d easily follow a trail of Senas to Mexico, leap the Atlantic to Spain, and land amidst a gaggle of relatives. It sucks being a romantic sometimes — there is no EL CAMINO DE LOS ADOQUINES AMARILLOS (Yellow Brick Road) to the land of female ancestors.

Two years into the research I had unearthed fabulous stories, unknown worlds, marvelous histories, but no Senas.

In a moment of ‘I’m finished’ frustration I began reading A.S. Byatt’s Possession. My buddy Jacque said the story reminded her of my odyssey; I hoped for diversion.

Then, on page 496, I read of the Île de Sein, “where the nine terrible virgins lived who were called the Seines or Sénas or Sènes.” Dang. There they are.

Roman geographer Pomponius Mela wrote in 43 AD or thereabouts of these women, perhaps Druidesses, living on an island he called Sena off the coast of Finistère, the westernmost part ancient Celtic Armorica. Though Mela placed his island in the English Channel, most historians believe he referred to l’Île de Sein.

By calling them terrible virgins he meant they were sovereign — unmarried — and therefore potentially dangerous; tales survive of these priestesses brewing the Druid potion of knowledge, calming storms by displaying their vulvas, healing all illness, and shape-shifting at will. This is also perhaps the Armorican Other World, equivalent to Avalon, where women consecrated the dead and released the souls of those brought to them via an unmanned boat from the mainland.

l’Île de Sein sits five miles west of Pont du Raz, edge of Armorica, land that became Brittany and is now a department of France. The old people on l’Île still speak Breton, part of the Celt language family, which includes Welsh and Cornish. The island is tiny, about a mile and a half long and three-quarters of a mile wide in some places; it balances five or six feet above the Atlantic. Two menhirs (French for upright standing stones, single or in groups) document human attention to the island, at least in the Neolithic Age; but knowing whether the Séna existed is not vital to the Îlenes. They are practical people whose island is threatened by rising sea levels; whose children must survive in this new technological world; and who must develop tourism to survive the loss of traditional fishing. Theirs is not my story to relate.

I essentially knew nothing of Celtic people, languages, legends and lands. They’ve been researched and debated for centuries; some scholars believe the Greeks squabbled about them in 6th century BC. I collected troves of information about Bretons and Breizh (Brittany). A friend’s shamanic dream gave me an image of a lighthouse, outlined on cliffs of a storm-washed speck of land, flashing across a thousand miles of turbulent ocean; I used that beacon throughout my unknowing — there was a Sena light blinking, my heritage as a spiritual woman in the midst of all that goodly analysis, and I was going to find it.

Lighthouse and ocean. Flames across waves. Tumultuous longing to belong, somewhere, to a tracery of folks. So much to learn about pagan women in the catacombs of mostly Christian history.

Some scholars believe Celtic women were equal in law and in Druidry, some say probably not. Celtic women may have fostered children to educate them in nation-to-nation diplomacy. Druidesses taught fighting techniques on an island south of l’Île, perhaps. There’s a hint of female bardic tradition. Stories exist of female warriors, ambassadors and scholars. The priestesses on Sena crop up, here in 1895, there in 1907; usually the story is similar to Mela’s, but occasionally new and subtle additions appear. Infertility prayers feature in a story of The Talkers, two Neolithic standing stones on l’Île; a semi-scholarly newspaper discussion says a third menhir might have been used to shore up the foundation of the church.

A hundred tribes marching to the tunes of fifty chiefs; disputed dates defined by bewildering decrees; nations consumed like truffles; troves of history uncovered regularly in church basements. Lakes, rivers, landscapes and forests may or may not have existed — reality and myth so intertwined they are one and the same. Where does my rational brain need to step in and slow down my dreamy emotional brain? Am I chasing the chimera? Why is this so important to me?

A truly devoted friend takes pity and sends me to Brittany. Perhaps, she thinks, I’ll get some answers and quiet down. I mostly blow the opportunity. I land in Brest, rent a car, get lost hour upon hour, miss the ferries to l’Île, laugh often, speak with almost no one, eat rarely, fall totally in love with the Bretons and Brittany. I realize I don’t know my ass from a hole in the ground regarding their culture, and I learn nothing of the priestesses or the Île de Sein while there. Finally, I return home determined to get back there, well prepared.

Going to Brittany again requires a hellava lot of work. I need money, of course, and I need to learn French. A network of support here keeps me invigorated, believing, and encouraged. And, I keep studying the history. But primarily, I work on getting strong enough physically and psychologically to travel and be present while I’m over there. I’d been mightily depressed, sedated and impaired for nigh on twenty years, and am ever so personally depleted, but this desire to truly be in Brittany and on l’Île transforms me.

To focus I create a three-foot-by-three-foot sheet of paper, tape it to the hall wall, and daily write my intention to be on the Île de Sein in 2015. I fill up one sheet with ideas, wants, hopes, needs and intention; I begin another. I write and publish my second book of essays and poems, Writing Myself Back Into Life, in itself an intention. Replete with some of my most gut-wrenchingly honest and difficult writing, the handmade run of 40 copies sells out; my readers admire the word-smithing and craftsmanship but find the topics quite difficult to discuss. Writing the book frees me from ancient sorrows and self-maintained shackles but it closes doors to several relationships, too.

I move house from the exquisite llano y montane (plain and mountain) landscape and desperately lonely ranch back to my community of friends and artists in Dixon. I study, recite, read, listen and try numerous ways to learn the incredibly beautiful language and fail. Life sends the money. I leave for France on Labor Day and return to the US a month later, spending 23 days on l’Île de Sein. I step onto the pier Sept. 10, at 10:28 am, Paris time. I willed myself here. Now what?

During my second night at Hotel Ar-Men I awaken three times to sonorous sounds of a woman in ecstasy. Her sultry sighs of pleasure — slow full intakes, great heaving exhalations — last long; I drift in and out of sleep to them. I hear her again in the afternoon and early the next morning. I’m envious and bemused — so, all those tales of French lovemaking are true, eh? Her joyous music stays with me, somehow mingling with the pleasurable tingles of moist air on my skin, those caressing kisses of warm wind, the way my body interacts with stones, grass and flowers. For days I hear these love songs everywhere.

Each day waves of ocean and wind lick my skin clean, removing calcified attitudes and limbering ligaments, working physical magic on my abraded nervous system. I become agile, exploratory, more actively curious. I spend hours in liminal space with nothing between me and living. There are tide pools to witness: small brown blobs like blood clots with tentacles capture my complete attention. Bivalves bubble and breathe. Cormorants dive and dine, then drape huge wings to dry. A disheveled great blue heron stalwartly withstands gusts, awaiting a moment of clear sight to stab breakfast. Up one side, down the other, over the rabbit warrens, across the slick seaweed, always curious. I find networks of stone walls and foundations. On one end of the island, the rocks subdivide garden plots; on the other end, they indicate old dwellings and odd buildings.

My brain works again. Though I am more likely to answer in Spanish or German, I am pushed to listen and comprehend simple French conversation. I must ask for food and water. I must get directions. I must interact with strangers or strangle in loneliness. I speak haltingly to a woman whose father joined Charles de Gaulle in London for Free France. Dominique and Marielle applaud unexpectedly correct French. Each day the faulty synapses fire more quickly and accurately. My confidence grows. I mend.

Then the day before I leave, I sit on the north beach gulping as much of the sensuous reality of this vital place into my memory banks as possible. I have 3,500 photos and thousands of words describing what I’ve seen, yet I’m afraid I won’t recall this experience, so vital and necessary to me.

What is happening here? My longing to be on this island chased me across a continent and an ocean. Of course part of it is my need to belong to a tradition of priestesses who were more than sex workers. Of course, it’s my hope to be recognized for my knowledge of this place. Of course, it’s my love of this astonishing beauty. But the longing is more, so much more and I am truly afraid I won’t ever know what it is. And, then, I know, for I am given a gift.

All those womanly orgasmic sounds are the tides, our great heaving mother ocean. The whole fabulous island filling with whispers and sighs, the sensuous soughing of sand and sea are all life — Life — breathing. This knowing becomes an overwhelming physical loveliness of being bodily alive, in rhythmic motion, synchronized with that from which I was born. Fire and water. The utter miracle of this planet and me on it, enmeshed in the improbable and incomprehensible splendor of being alive and belonging to all creation. I came here to learn that I am whole, that I belong to life. Witnessing is my gift back.

Jeanne Treadway’s essays appear in several Planet Waves annual editions and can be found, along with her poetry, photography, sculpture and shrines, at both ravenjets.com or ravenjets.wordpress.com.