What did you do when you knew?

Several years ago, I came across the idea of the vision quest as one of the most effective methods of encountering one’s soul. Since the earliest times, people and tribes have received profound insight and messages about themselves and the world through vision questing. Done in a structured manner, the vision quest uses ritual and ceremony to create a container for transformation. 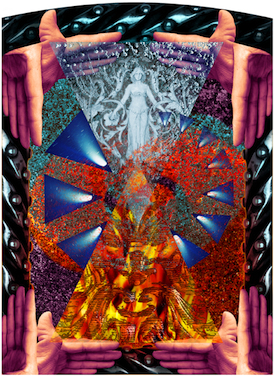 Gnosis from the triptych of the same name by Charlie Lemay

According to Bill Plotkin, in the ancient sense a vision quest has several universal elements: a remote, wilderness setting; fasting; solitude; direct exposure to the forces of nature; and attention-focusing and consciousness-shifting ceremonies, prayers and practices. They also take place over a significant period of time.

Perhaps the way we relate to this form of questing in the modern world is often not so structured and concrete. But it still serves as an appropriate metaphor and guide that allows us to orient on the concept.

Vision quests and rites of passage are intimately linked in my mind. As a right of passage, a vision quest facilitates the transition through a crossroads as we move into a new phase of life. It allows us to step away from our ego identifications and attachments so that we can get perspective, and maybe even catch a glimpse of something new and different. At the personal level the options for vision questing are endless — for example: the transition from adolescence to adulthood; from being partnered to being single and back again; through death and loss; or the transition from one job to another.

These days, it seems we are going through a collective rite of passage. The idea is not new, and lord knows I write about it on Planet Waves frequently. For a more eloquent discussion of this idea, I always recommend Richard Tarnas’ Cosmos and Psyche, the reading of which is a vision quest all its own.

Although we have certainly come through collective rites of passage before — the shift to a world governed by the New Testament rather than the Old Testament, or the scientific and industrial revolutions, for example — there are some reasons why this time around feels different. We can learn from the past, but it’s also important to keep in mind a few key distinctions. The most prominent of these is probably that, for the first time in known history, we have engineered the means to wipe ourselves off the planet via nuclear and biological weaponry; also, the refusal to accept the truths about ecological degradation and then act accordingly.

I don’t bring these facts up to scare you, but to underscore the importance of the tasks we face as a collective. Navigating this rite of passage as consciously and openly as possible is vital to our survival. Rising to the occasion together in supportive, compassionate environments with the understanding that we don’t have to face this work alone — that we’re all in this together — is a process that is absolutely worthy at whatever level we’re ready to engage it.

I always use exercises from Joanna Macy’s Coming Back to Life: Practices to Reconnect Our Lives, Our World in the classes I teach. Joanna’s work informs the grief and despair processes I facilitate on my own and with clients, but her perspective permeates my life at even deeper levels than that. Whenever I am at my lowest, I will pick up one of Joanna’s books and instantly remember what gives my life heart and meaning: Participating in the transition from an industrial-growth civilization to a life-sustaining civilization. This transition represents a collective rite of passage, and because of that, a collective vision quest.

In Macy’s book, there is an exercise called “Thirty Years Hence.” The exercise invokes the importance of enlarging our perspective so that we begin to think as ancestors, which allows us to have a healthier relationship with time. The exercise invites participants to imagine moving forward thirty years in time where, by the power of imagination, participants come into contact with a child who asks the participant three questions:

Is it true what they say about life back then? Were there really millions and millions of sick and hungry people? And bombs that could blow up whole cities? Could that be so?

What was it like for you to live in a world like that? Weren’t you sad and scared all the time?

Where did you and your friends find the strength to do what you did? How did you keep going?

It can be tricky to pose such a question in a society where guilt and shame are used as weapons of mass destruction — particularly at the level of the psyche. Doing the work of vision questing, of going into the wilderness alone, without food or water, isn’t for everyone, and there can be guilt associated with knowing that one ‘should’ do something but can’t or won’t. It can be very difficult to move beyond the paralysis and inertia that often accompany guilt and shame.

In my graduate studies I was fortunate to have a teacher and mentor who focused on nuclear energy, rites of passage, Jungian Depth Psychology, and Joanna Macy’s work — and he was open to and interested in astrology, so it was a match made in heaven. He is the president of the board for a local non-profit called Rite of Passage Journeys which takes kids and adults out on vision quests, among other incredible things.

When speaking of vision quests and rites of passage, my mentor often told a story that illustrated the many layers of complexity in our global vision quest. In September of 2001 he took a group of teenagers into the mountains for a nine-day vision quest. The first few days of the trip were spent getting ready, and then the kids headed out for three days by themselves, fasting in the wilderness. The final three days would be spent integrating and processing.

This particular year, the events of September 11 happened while the kids were in the solo questing portion of the trip. My mentor and the other adults on the trip were faced with the task of helping these kids, who had just experienced what is usually a very intense and life-changing experience, to transition back into a world where everything had radically and quite literally changed completely. That story always helps me to keep our modern quandaries in perspective.

Sticking with the 9/11 theme, another image comes to mind that reflects the intense nature of our times — this collective vision quest. There were videos that aired after the buildings came down showing people falling from the tower, holding hands. Can you imagine? Standing so high up, knowing there was no way down and therefore choosing to jump? But not just choosing to jump — choosing to connect with another person, to hold their hand as you both leaped together into the next phase, the next cycle, facing complete annihilation and having no idea what lies beyond. It’s an image eerily similar to the Tower card of the tarot, which also speaks of total ego destruction and transformation — and ultimately spiritual healing.

Images are the language through which the psyche speaks, and they go far beyond the merely visual. They are auditory and sense-based and kinesthetic — they affect us through all of our senses and can be quite emotional. The psyche throws out images in dream and in waking life, and we get to decipher the clues and piece together our very own language of soul.

The images being thrown about now are vitally important in helping us to understand past, present and future. They’re also important because they can help us to consciously co-create our futures.

So what does your vision quest starting point look like? When I listened to one clip of music for the Vision Quest project, I instantly saw myself standing around a fire at twilight somewhere that seemed to be Africa, with trance-dancing tribe members pounding their bare feet in the dirt all around me. I could see the embers from the fire flying up into the sky, and had the feeling of being held and supported by some ancient wisdom that at once transported me elsewhere while reminding me of mud and body and physical presence.

I changed to a different clip and could see the ocean in front of me under stormy skies in the metallic sea-foam green that only a stormy sea can display. It felt like home, and I was more than ready to swim, knowing the beauty and serenity of the sea is equal to its merciless churning. Both are images I will revisit in the coming months, journeying through them to see what is revealed.

You came here for a reason — to this Earth, to this website, to this experience. We are so lucky to have astrology, this container, and the openness to exploring and making a difference.

So go ahead, step out into your own vision quest, or onto the next turn in the road. It can be scary at times, but often magical and enchanting as well. What do you want to envision and what do you want to manifest? Dream big, take action where you can, and remember — there’s a whole community of us here who are doing it too.

Amanda Moreno is a practicing astrologer, soul worker and paradigm buster based in Seattle. Her adventures in these forms of ‘practical woo’ are geared towards helping people to heal themselves and the world. She can be found in the virtual world at www.aquarianspirals.com.