Bright light had woken me although the Sun had not yet come up over the horizon, a few stars still visible in the blue sky. I was lying in my sleeping bag on the sandy floor of the little oasis, consisting of two date palms encased by sandstone rocks about 50 metres high. 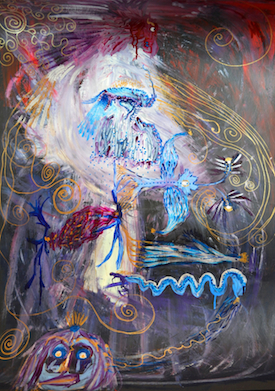 Total silence. No wind, no rustling leaves, no indication that there was anything beyond where I was. This scene, here and now.

Abdullah was sound asleep a few feet away, his ‘Arafat’ scarf thrown over his face. He would not awaken for another five hours but I did not know this. I was unable to light the fire and prepare tea, I had no idea where I was and did not want to wander into the desert so I sat and waited, alone with my thoughts. I was in the ideal situation for meditation and settled under a rock to listen to the cleansing silence.

For the first time in my life I experienced total quiet; it was accompanied with stillness — no perceptible breeze — and at first the sensation was incredibly wholesome, a relief to my body.

Bit by bit, however, a feeling of unease started to creep in. It was not a rational fear; I knew I was safe, but my mind was uneasy. I had spent the night up a mountain with an Arab gentleman who I had met the day before. I had no idea where I was or who he was and had no mobile signal. There was some water left but no food.

My mind said, “You are completely irresponsible; no-one knows where you are and if your friends knew they would think you were crazy. At your age (54) you should know better!” But my heart was smiling at the beauty around me, and intrigued by this strange man who felt uneasy if he didn’t sleep under an open sky.

I had been catapulted from Europe to Cairo a few months previous for work reasons. I had never imagined leaving my home in Rome nor had I ever had any particular desire to visit the Middle East; but the Universe had thought better and sent me my wake-up call. Cairo had been a not totally unpleasant shock, but I was still catching my breath.

For Christmas I decided to go trekking in the Sinai desert on the recommendation of my yoga teacher, who had fixed me up with an Egyptian guide. When I arrived at the beach camp where I was supposed to be staying, this young man was taken up with amorous pursuits and had no interest in me. Possibly to get rid of me he introduced me to the Bedouin.

Abdullah had been created with total economy: of diminutive stature, skinny, wiry and strong. He wore a thick black beard and moustache, and his shaven head was covered by a scarf that served as sunscreen, towel and handkerchief, among other things. His small, ebony eyes were deep-set to protect them from the sun and his wide monkey mouth, full of mischief, displayed teeth that would have been perfect if they hadn’t been so stained with tea and tobacco. When not smiling, he looked disconcertingly cross. He wore traditional Bedouin dress: a ‘galebea’ (a long white robe with collar and cuffs like a regular man’s shirt), loose white trousers and sandals. He drove a beaten up pickup truck and carried his few possessions in his top pocket (cigarettes, documents and money) and in the back of the truck (a few blankets and cushions).

My new guide squatted on a mat near the seashore and proposed the trip. We would walk from the beach, up the mountainside to an oasis that afternoon, spend the night and take it from there. He would manage the food and cooking.

I was thrilled by the idea but a little worried about being alone with him. I convinced myself that I didn’t look very attractive in my trekking gear anyway and was probably too old for him. We set off along the beach under a blue cloudless sky, and began to climb up stark red mountains. The limpid air filled me with energy and I ran effortlessly up the escarpment. We met lizards and hoopoes. Abdullah could tell me about every rock, shrub and creature. This was his intimate home. When we set up camp he gathered a few sticks of slow-burning aromatic wood and made a fire, where he baked delicious bread under the sand and roasted a few vegetables. Later, as we gazed at the stars, he told me about his childhood under the Israeli occupation and then ,of course, he put his arms around me. I fended him off, we laughed about it and went to sleep.

When I returned to Cairo we kept in touch, and I knew if I went back to see him we would become lovers. Of course I did go back.

For one and a half years I would join him in Sinai for a few days a month. Each meeting was a trip into the unknown. He took me to deserted beaches, or deep into mountains where we camped in caves open to the sky. On one trip we waded to a lagoon through chest-deep seawater, our backpacks on our heads, and slept on the island for two nights, feeding off clams and sweet potatoes.

Abdullah needed very little food or water, just plentiful supplies of cigarettes and tea; and I enjoyed living off the bare essentials, our simple meals acquiring a ceremonial importance, and tasting exquisite.

During my time with Abdullah I had two narratives going on within. When I was a small child I was incredibly tough and I impressed my parents by my feats of strength and hardiness. Apparently I never wore shoes and would go out in the snow barefoot and bring in the coal bucket. I recognised this same spirit in Abdullah and it re-kindled my childhood passion for taking life by the horns and playing with it. The desert sloughed away useless beliefs that I had acquired during my life, and I was back in touch with my inner spirit. Not only was I blown away by the beauty of Sinai — I felt as if I was returning home.

However, my mind didn’t like my new state and tormented me, particularly between daybreak and noon while I was waiting for Abdullah to wake up. The most tangible fear surprised me; no one from my ‘tribe’ (meaning my family or, more importantly, close friends) had met Abdullah to confirm that he was acceptable.

Now that I lived alone and didn’t have to explain my actions to anyone, my mind continually sought reassurance from the outside that I was doing the right thing, igniting a deep visceral fear when I didn’t find that reassurance. I was deeply afraid of my own choice. In the eyes of my friends back in Europe I was alone in a part of the world that was getting a reputation for being highly dangerous, with a man who looked rather like a Taliban. At the same time, my conscious self was returning to a place of spiritual freedom. Luckily my conscious self was triumphant.

Abdullah and I spent all of our time in the open air and I grew to love night. The Egyptian day is divided more or less evenly into light and dark, sunrise and sunset happening between 5 and 7 am and pm all year round. Astrology probably originated here because the night sky is an integral part of life, not necessarily a time for sleeping. In Sinai the crystalline atmosphere and lack of building allows a 360-degree view of the heavens, reaching until the horizon if there are no mountains — so one really feels part of the surrounding galaxy.

Night-time astronomical activity is frenetic. Shooting stars are constantly whizzing overhead, sometimes audibly; stars and planets change position with surprising speed; the Moon rises or disappears without warning; and then the Sun announces its arrival by filling the sky with pink light. Sometimes I couldn’t sleep because I was so distracted by what was happening above me. Even without a Moon, the stars provide enough light to see adequately and the beam of full moonlight is bright enough to disturb one’s repose. Bedouins stay awake though much of the night, fishing, doing building work and household chores. Children play. During the unrelenting heat of the day people find shelter under a rock and sleep.

In other parts of the world we use daytime clues as well as the stars and Moon to help with farming — leaves on trees, clouds, wind and so on — but in the sparse desert Bedouins rely on the night sky. Abdullah showed me how the position of particular stars means it is time to plant certain crops, or mate the camels; I learned how a breeze inevitably starts up just before moonrise. He was totally in touch with the cycle of the Moon.

We would lie together under the night sky and between making love he would tell me about himself, his life and how Sinai Bedouins live.

”My religion is ‘don’t bother other people’,” he said. He is Muslim, but I never saw him pray and he didn’t observe Ramadan.

“When a Bedouin man and woman lie together they sometimes imitate the noise camels make in the rutting season to make each other hot.” Here he imitated the sound of the camel.

“My father made me walk everywhere without shoes. He said that otherwise, if my shoes broke, I would be stranded.”

At the age of eight he could plough fields using camels; at thirteen he had his first sexual experience, forced by an older woman whom he ran away from, hiding in the mountains for a few weeks. One of his brothers had mysteriously died in prison, arrested for possessing drugs, but had never been given a trial.

The Egyptian government is doing everything possible to extinguish the Bedouins and their tradition. With the excuse that IS (the Islamic State) and Al Qaeda are operating in Sinai, they are rounding up ordinary people randomly and imprisoning them, burning their homes and destroying schools and hospitals. Many have been killed by the authorities. No journalists are allowed in North Sinai, so the world is mostly ignorant of what is happening there, and the persecution is eclipsed by the horrors taking place in Syria and Palestine.

When I listen to my Bedouin friends talking about this I feel helpless but privileged. Without seeking it I was sent on a mission to have my eyes opened to the reality of life in this region; when a friend of mine in the UK warily asked me what it was like here I replied, “It’s just full of people trying to get on with their lives.” He laughed and said, “Of course.”

Fiona Robertson works in Education in the Middle East. Currently she works with teachers in Syrian refugee camps in Jordan but returns frequently to Sinai. You may contact her at robofio@outlook.com.