My first hanbleceya, or Lakota-style vision quest, was in the summer of 1999. Despondent over my divorce, I had also lost my job when the herbal company of which I was general manager sold, and I’d broken my back on Valentine’s Day. I was mentally, emotionally, physically, financially and spiritually down and drinking heavily again. I needed something to move me in the right direction. In June of that year, friends got me in touch with Jim Miller, a Lakota spiritual leader from Pine Ridge, South Dakota. 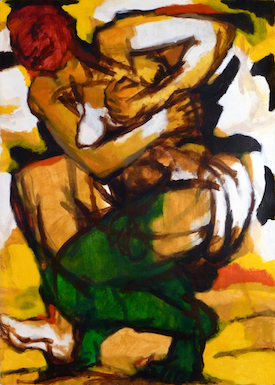 Jim invited me to participate in a hanbleceya. After several years of going “on the hill,” as it’s also known, I began to Sun Dance with Jim and others. I danced for seven years and assisted for at least four more, at which time I felt my commitment was complete.

Some people have amazing experiences on the hill or during Sun Dance. To be struck by lightning is among the most profound. This is an honor, a sign of acceptance by the Thunder Beings for a special role. There is evidence some indigenous people harnessed lightning, directing it into the Earth to fertilize the soil and to create atmospheric conditions conducive to health. They knew how to create all they needed from a union of the Earth and Sky. Ceremony teaches us to develop this union in physical and nonphysical ways.

I haven’t been hit by lightning yet, but I saw and heard spirits, heard native children laughing who lived at least a hundred years ago, and witnessed the screams and destruction of an Indian village of which I was a part when soldiers attacked it. These may be interesting, but the real thing is how ceremony infiltrates my day-to-day behavior.

First, it is important to understand that Jim Miller was not always a spiritual leader. A product of the reservation system and boarding schools, Jim experienced physical abuse, sexual abuse, drug abuse and cultural depredations. A decorated Vietnam Combat veteran, he also was in the federal prison system after being captured by U.S. Marshals following a shootout at Wounded Knee in 1973. His story has evolved from hate, anger, pain, addiction, violence and hopelessness to love and compassion. The risks he took to open his ceremonies to all people are evidence that he truly walks the Red Road: the road of consciousness and strength. His experiences shaped mine through reconciliation with others, as well as with my own heart.

In my first sweat lodge with Jim, he gave those of us who would go on the hill instructions on how to prepare. The preparations included getting materials needed for the hochoka, the sacred altar. These preparations protect a person when on hanbleceya. I needed to understand I was going before forces and spirits normally not sensed during daily Western life. Being exposed in such a way during days of fasting and prayer calls these powers in. Just exactly what they may do, one never knows. Hence, one must prepare for anything.

Jim runs hot sweat lodges. The lava rocks glowed red-orange as they were brought in. As I sat in the lodge the first time, I did not understand real heat until Jim poured water on the rocks and steam hit my body. I remember thinking, “Oh, my god. This is what they are talking about!” The native people sang, but I couldn’t breathe. I thought the skin would curl off my back. After the lodge, I went home and got ready to go on the hill.

A week later, we met Jim for another lodge right before we went up. It was even hotter. Knowing I would be without water for up to four days made me more attached to the sweat flowing from my pores. Jim said he would send someone to get us when it was time to come down, and we’d go back into the lodge for another purification. There, we’d say whatever we wanted, then have a meal and a shower.

Why do this? To show the spirits we are serious about the vows and commitments we make, whether they are for us personally, for loved ones or for something else. Basically, we ask for two things: help and health. Engaging in ceremony can bring about a change in behavior and consciousness more conducive to fulfilling such requests and living our life’s purpose.

I soon realized how much support we receive in ceremony. The support — which is the energetic support of a greater collective, connected consciousness — came through family supporters, spirits, sights, sounds, feelings, dreams and perceptions. Despite the support, I suffered. My hardest hanbleceya was when I was alone on the west face of the Bridger Mountains in Montana in July 2010. I had some shade, but it was really hot. It was the only vision quest during which I did not recover during the night. What made matters worse was that my hochoka was above a cool mountain stream I heard below. Thirst was truly maddening.

So after years of ceremonies, sweats, Sun Dances and vision quests, what did I learn? What did I gain? Certainly not what I expected.

For me, the lessons came from reflection rather than revelation. Sure, there was that one year when, on the last day of Sun Dance, I looked up at the sky and asked, “Will this do any good?” I wondered if all the ceremony and suffering really made a difference on a planet that seems to be spinning out of control. I heard a voice clearly say, “Stevo!”

When I hear the voice that isn’t mine, I listen carefully. I waited, and then heard more.

That answer has kept me vested in knowing that things we do in a sacred way do a lot of good. How? They change the vibration of the person and the space in which the person works. Vibration is key to everything. Through vibration we create and we access mystery.

Voices or visions are not necessarily important. What is important is how the impact of the lessons builds over time as one takes appropriate action. I have listed some my lessons below. They are not in order of importance, as they are all connected.

Appreciation
It is almost incomprehensible what thirst can do to a person and how good water can taste to someone who almost died from dehydration. Water is the best medicine. Nothing teaches appreciation like that first drink of water after days without it. Nothing. As I learn to appreciate everything like that first drink of water, I realize how much I am given each day. It took me years to understand that sitting on the hill in peaceful contemplation and appreciation is perhaps more important than asking for something, even through prayer.

Humility
After a few minutes in a sweat lodge with Jim, it was impossible to feel I was better than anything else. If I could have breathed I would have screamed out for mercy. Self-importance has no place in the abode of spirits, which means it has no place in daily life.

Compassion
Compassion never goes out of style. Compassion is not weakness. It is not stupidity. Frequently it simply entails choosing love over fear, kindness over arrogance, respect over neglect. Compassion comes from strength. Thus, true compassion simply cannot make the recipient of another’s compassion dependent upon it. In other words, compassion strengthens both the giver and receiver. We may fear compassion because we fear making a person dependent upon us. The fact is, sometimes a handout is exactly what is needed. Unconditional compassion has a place. Be kind.

Sacred Space
Spirits respond to sacred space. It begins in the heart. It extends into the world. I had no idea how important it is to create this until recently. Sacred space creates resonance with the unseen world of support and guidance. From this perspective, “Everything is always watching,” as consciousness can only create consciousness. Creating, maintaining, sharing and carrying sacred space is one of the most important things I can do. It is the welcoming environment in which spirits come in and ask, “What do you want?” Sacred space is immanently connected to ceremony. Anyone can create ceremony and sacred space. It does not depend upon dogma or giving away one’s power to be in the sacred space of another.

Giving and receiving
In the modern world, it is becoming harder to maintain the connection with what gives us life. Giving and receiving are types of shapeshifting. Shapeshifting is part of the natural order; squeezing things out of shape to survive is not. We take to stay alive. We must give back to stay alive. I put it like this, “Oh, what a web we weave when we first practice to receive.” This acknowledges the connection of everything and how aware we can become through sensing the vibrations of our environments.

Surrender
But don’t give your power away. Surrender is required, yet unique for each person. A vision quest can break down one’s resistance to whatever it is one is to accept in order to become what one is to be. Surrender is a source of true personal power. It is energy paradoxically created through simultaneous fusion and fission.

Intent
Life has power and purpose when one has intent and purpose. Intent shapeshifts the energy around us into the form we intend, up to a point. But intent never provides us with unfettered creation. We are connected to others, and thus impacted by the activities and creativities of others. I’ve learned that shapeshifting heart and mind, losing self-importance, and keeping my sense of humor are much more enjoyable ways of using intent compassionately, rather than trying to force something into existence that may cause more harm than good.

Paradox
The Danish physicist Niels Bohr said, “No paradox, no progress.” The spiritual world opened up by a vision quest is a paradox. Nothing was as it seemed once I began to see things for what they could be, which is often more than I can imagine. Keener observation led me to understand I will never understand it all, while opening my world and senses to ever greater mystery and the appreciation of it. Paradox creates an enlivening sense of awe and wonder, trumping the boring world in which I think I know it all.

Science and Magic
Jim once said, “What you call science I call magic and what you call magic I call science.” The cultural potential for misunderstanding is rife in this statement. Yet, quantum physics merges science and magic, both of which can be thought of as intended creation, into a compatible relationship of support rather than separation. I consider science and magic as the same side of the same coin. Intent is on the other.

We are unlimited
But no one ever said being a god was easy. A spiritual path is a pain in the ass and a panacea. It is a union of Earth and Sky.