My Yearlong Vision Quest in the Cascade Mountains

I worked as a spiritual counselor in Sedona, Arizona, in the 1980s. When my father, Uriah White Buffalo, died of lung cancer in 1988, I was devastated.

As a young girl I had stayed home from church, which my Welsh mother attended with regularity on Sundays. Instead I opted to ride horses with my Dad up to the ridge above our Harrisburg, Pennsylvania, ranch. At the top of the ridge my Dad and I would thank Great Spirit for our land, our family and our livelihood. That was my church. 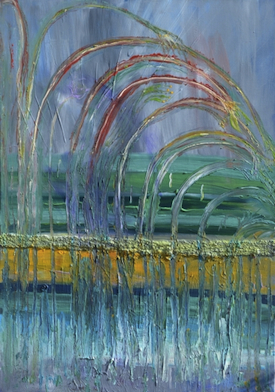 My father taught me to ride and I became a champion barrel jumper in my teens. I had been born blind and my sight was restored at around age 5 through the use of some yoga exercises. The exercises were taught to me by an Indian family who stayed with us for some months when they first arrived to the area. They had been discriminated against because of their skin color, and my father had offered them a place to stay. In return, they worked with me; and thanks to them, my sight was restored.

Because of my blindness, I developed my intuitive gifts. I could find lost objects and lost children in the parklands adjacent to our property. After a career as a teen model for beauty products and fashion, I settled into a career as an intuitive and morning talk-show host in Ohio.

An incident that put me too far into the state spotlight in my mid-twenties motivated me to move to Sedona. I had predicted a rare earthquake in Ohio and had warned the employees of a nuclear plant to shut the plant in order to avoid a hazardous waste spill. Heeding my warning, the plant was closed before any damage was done and the newspapers went wild. I was hounded at my home for months before a friend of my father’s gave me work as a ranch hand out west.

I lived quietly in Sedona for ten years before my father’s impending death brought my world crashing down. In his dying words my father shared his thoughts with me about my future.

“I’m glad I raised you on a ranch Little Golden Bear, my father said. “You will need those skills when you come to take care of the White Buffalo.”

I knew that the White Buffalo were legends and prophecy, so I chalked his words up to the feverish vision of a dying man; but I did not forget them. Wanting to prove my worthiness for such a demanding life mission, I later decided to undertake a Vision Quest.

I had read Black Elk Speaks and carried a dog-eared copy with me for inspiration. I knew from having read it that the Vision Quest would mean dedicating a year of my life to a solitary meditation in a secluded spot. No one ever told me that as of the 1970s or so, the duration of a Vision Quest had been shortened to a week, or even as short a time as three days.

One of my native friends in Sedona was Horace Littlecreek. Horace was training me in the ways of the native path. When I asked him about Vision Quest he agreed that it would be useful. We never talked about the idea I had cemented in my brain that the Vision Quest was a yearlong process.

My friend Shane’s parents owned some land in the Cascade Mountains. I visited and decided this was the appropriate spot. With the permission of Shane’s parents, Shane and I outfitted a cave with the things I would need for a year. He left me with a truck with no brakes and promised to have my mail sent halfway up the mountain. The postman was to ring a bell on a tree near the road and I could come to pick it up.

I also took two wolves that I cared for like two faithful dogs on my journey. If it were not for these two amazing animals, who helped me to become one of their own, I would never have survived the trials of my experience. They saved my life more than once during the long, snowy winter by bringing rabbits for me to cook when I no longer cared whether I lived or died. They also saved me from the certain death of almost walking off the mountain into thin air on a snow-blind trek I made in the midst of winter.

In November of 2001 I met the actual White Bison herd who were to come under my care. My husband Charles Button and I both received a message in our morning meditations that we could meet the world’s only known herd of White Bison near Flagstaff, Arizona, not far from our Sedona home. We met them and their original caretaker, and immediately enlisted as part-time caretakers.

Seven years before his passing, Jim, their owner, saw how much they meant to me. I cared for them part-time while I continued my work as a guide at the South Rim of the Grand Canyon. When Jim died in 2008, Charles and I were given the care of the herd by Jim’s widow. It was amazing to realize that my father’s prediction, made twenty years earlier, had come true. After four years in Bend, Oregon, we have finally found a permanent sanctuary for the White Bison in Upper Lake, California. We arrived on Thanksgiving this past November and are adjusting well to our green-forested and well-watered surroundings. Thanks to El Nino, we have even more water than needed since our arrival.

The most dramatic circumstances of my Vision Quest as well as my day-to-day pursuits will be published in my book coming out in 2017. I wrote the book as a kind of guide to Vision Quest, as a guide to quieting the mind and to learning to live with nature. I am honored that my friend, Linda Tucker, Keeper of the White Lions, will write the foreword. Linda has lived through many experiences similarly harrowing like mine in creating a sanctuary for the magnificent White Lions of Timbavati in South Africa. She is an inspiration to anyone seeking to create a sanctuary for wildlife.

Now that our non-profit organization, the Sacred World Peace Alliance, has been able to find a sanctuary for the White Bison, I invite you to join us this coming June 19-23 for White Bison Vision Quest 2016.

Mitakuye Oyasin! All My Relations.

Cynthia Hart-Button is founder and President of the White Bison Association. Part Lakota Sioux, she has over forty years of experience as a spiritual counselor, animal handler, ranch manager, tour guide and director of operations for large spiritual and educational groups. She was also given the duty of providing security for the sacred Native American Medicine Wheels, and was recently named to the Native American Council of Thirteen Grandmothers. You can reach Cynthia through the White Bison Association at 805-400-7866, or email her at mystichart@msn.com. For more information about the White Bison Vision Quest 2016 in June, please contact Kari Noren-Hoshal, our Director of Education, at 410-662-4676 or karinorenhoshal@aol.com.