Eighteen years ago, I went to a rummage sale in Newport, Oregon, and bought an oil painting of an American Indian. It was painted on a 16×21-inch, hand-carved slab of Taos sandstone that weighs sixteen pounds. Its original crate-wood frame adds four inches and four more pounds. It’s not a lightweight piece. 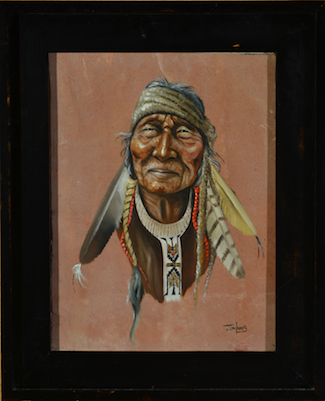 The sandstone painting of a Native American by an artist named “Jenkins.”

For sixteen years, I lugged the painting from one dwelling to another, clueless about both the artist and the subject, or how such a painting ended up in a pile of donated items in an Oregon coast rummage sale. For a long time, I thought the subject was an Indian chief. The artist who signed his name, “Jenkins,” on the painting had not written any name or title on the back of the picture. I took to calling the Indian man “Ancestor.”

My Ojibwa friend Joe encouraged me to look for the tribe and real name of the Indian I’d taken for my ancestor. He said it would be our Spirit Journey, and a chance to earn my war pony. He also said my ancestor would want to be returned to his people.

I’ve been on that Spirit Journey for a long time now. I thought discovering who the Indian man was and finding his people would be the end of the story. Of course it was not that simple. First I had to find out about the artist who had signed his name “Jenkins,” which could help identify the Indian man, and perhaps trace how the painting ended up in Newport, Oregon.

In 2011, I took the painting to an art authenticator, who kept it for two years while he traced the artist. He concluded that it was painted by Paul Jenkins (1923-2011) in the late 1940s, in the classic style of an 1850 portrait of a Native American Shaman. The face has the smile of an Indian yet to face the white man; his eyes are moist, as if the painting had just dried. The artist was also a skilled stone carver, the art authenticator said.

There was a problem, though. Paul Jenkins had reportedly destroyed all of his work done prior to leaving the Art Students’ League of New York, when he burst upon the modern art scene as an abstract painter. This meant there was nothing to compare my Ancestor painting to. I read everything I could find about Paul Jenkins, and learned who had been in his circle of friends. One of his closest friends had been fellow artist Mark Rothko (1903-1970) of Portland, Oregon. Rothko had family who lived in Newport, Oregon, who could have kept his friend Jenkins’s painting in their attic for decades.

I also learned about Jenkins’s art instructors, Morris Kantor (1896-1974) and Yasuo Kuniyoshi (1889-1953). In the late 1940s, when the portrait was painted, Kuniyoshi would have been nearly 60 years old. When I found photos of Kuniyoshi, it seemed apparent that the painting was not of some unknown Indian chief, but was of Jenkins’s art instructor, dressed in native splendor. Kuniyoshi had died May 14, 1953; seventeen days before I was born.

Usually, to complete a School of Fine Art degree, a student must create a perfectly life-like portrait, and students often choose their art instructor as the subject. I had looked hard for any other artist named Jenkins who might have painted a portrait of Yasuo Kuniyoshi dressed as an Indian, but could find none. I even looked for a “Jen Kins.” I didn’t know much about artists by name and had passed over “the” Paul Jenkins as possibly being the artist. But when I saw a photograph of Mr. Kuniyoshi, I had to take a step back and reconsider. 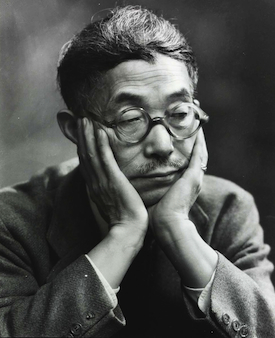 Then I read the Kuniyoshi papers in the archives of the Smithsonian, and realized that the real story is the one told by Mr. Jenkins in the image itself. Yasuo Kuniyoshi, it turns out, was a Japanese citizen who spent much of his life wanting to be a Real American in every way, and to be treated as such.

From the day of the attack on Pearl Harbor until 1951, under no circumstance was a Japanese person allowed U.S. citizenship. It was against the law during and after World War II. (Sadly, we seem to be repeating that cruel history today, rejecting refugees of current wars.) Due to the political and racial tensions surrounding the Second World War, the U.S. citizenship papers that Yasuo Kuniyoshi waited for never came.

In 1951, when the law banning Japanese becoming citizens was repealed, his hopes to become an American rose again, but for unknown reasons his application never was approved. When he was sick and dying, he asked daily whether the citizenship papers had come yet. Every day his wife had to tell him, “no.” Finally, unable to let his wish remain unfulfilled another moment, she told him, untruthfully, “Your papers came in the mail today.” It is said that he died a happy man with that news.

Yusuo Kuniyoshi is now called a great American artist, although to his last breath he remained Japanese, an “enemy alien.” But what the U.S. government denied him was granted by his student, Paul Jenkins. Jenkins made Mr. Kuniyoshi a Real American: a native American Shaman, the one everyone in the tribe consults.

This is as far as my Spirit Journey has taken me. I have found to my own satisfaction the artist who painted Ancestor and traced its probable route to a rummage sale in Newport, Oregon. The remaining leg of my quest, to return Mr. Kuniyoshi to his people, is so far unfulfilled. I guess I won’t be earning my war pony any time soon.

Eric Francis’ mentor Josepth Trusso worked as the studio assistant for Jenkins when he lived in Paris in the mid Sixties. Trusso refutes that this Native American portrait is by the Paul Jenkins in question. Eric’s note to me about it was, “I suggest we run the piece, but quoting this email from Joe as a kind of postscript. I think that the story is still valid as a personal quest, regardless of the outcome.” Below is Trusso’s reply to Eric. — Amanda Painter, Articles Editor for Vision Quest

“I’ve checked my correspondence with Paul and his signatures, none of which remotely resemble the sig on the sandstone piece. Why the authenticator never checked those easily available Paul Jenkins sigs is beyond me. Debra has researched a bit and found several Jenkin- named artists in the southwest who do paintings of Native Americans including an American Indian artist named Jenkins, too. So, we’re of the opinion it is not a work by Paul Jenkins.” — Joseph Trusso

18 Responses to A Spirit Journey