Seeking to Understand the Voice That Insisted I Seek No More

Light filled the doorway as Rosalyn emerged into the ceremony hall. Stopping dead in her tracks, she turned to the crowd of 150 people, scanned briefly, and locked her eyes dead center on mine, responding purely to my electricity. Years of illness and baffling perceptions during meditation had me booking this retreat for Rosalyn’s deep insights but I hardly expected to witness them so directly. It would be only the beginning of her looking into me — or through me or whatever she did — and reinforcing that I already knew everything I was there to acquire. 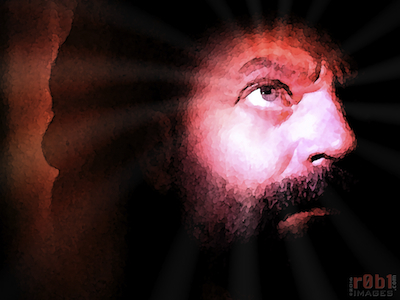 Rosalyn Bruyere is an internationally recognized clairvoyant healer who strikes from every angle: scientific, medicinal, spiritual. Her keen ability to perceive auras and chakras was why I was there. But her willingness not to mince words would perhaps play the greater role in my ownership of answers exactly right for me.

After a lifetime of trying to do things the “right” way, I now meditate standing up; find unbridled sex with groups of men to be a holy encounter; fill doctors’ prescriptions and then listen to my own higher wisdom to discern how much to take, if any. Most recently, I’ve incorporated something akin to “grace” before each meal, just like we did on that Bible-Belt farm I escaped. Only now, every syllable is formed of personal meaning from the heights — and depths — of my very being.

In my early years, I was the poster child for Sagittarius: radical, fearless, and blessed with back-to-back serendipitous circumstances. But my Uranus opposition around age 40 began a bewildering era for me. I’m sorry but my midlife transition had nothing to do with Corvettes or scamming on 18-year-olds. No, no. Two conditions descended upon me, knocking this once-surefooted Sagittarius completely off those feet.

Incurable ulcerative colitis had me living out most of the day bleeding into the toilet. Simultaneously, I began perceiving a voice of higher guidance that insisted I had the world at my fingertips. Right where I sat. In the bathroom. Wasting away and becoming more anemic with each passing day.

In last year’s Cosmophilia annual edition here on Planet Waves, I describe this phase of my life in “The Universe Spoke — And It Was Kinky.” I invite you to look back at that article for insight into how visual perception during meditation led to audible perception, which led to an avalanche of information I was unable to process during that period of constant physical dis-ease:

“You have the idea that you must endure something of a grotesque and horrid nature in order to be all that you can be. You have this all wrong. It is actually the easiest thing in the world. The world is what makes things so repeatedly difficult. You can but have it all if you just decide to and then step toward and into it. For now, the better of you shall be inside the better of me yet I cannot be inside the better of anything that does not lend itself fully to betterment.”

And so a failing body coupled with transcendent messages from beyond had me seeking insight from numerous corners — astrologers, physics, healers — which the voice said I need not do… because I had “All” right now. Nevertheless, news of a weeklong healing intensive with Rosalyn Bruyere hit the spot like nothing else. She understood the physical situation as much as the metaphysical one. This had my name all over it.

But right out of the gate I hit a wall of sorts. Rosalyn had dissected this angelic form of healing into distinct energetic textures, including detailed analysis of the vibrations and yada yada yada. This left-brained deconstruction of loving light did not speak to my soul. I was hoping to learn how to open myself to higher guides who would essentially use my body and dexterity to bring healing. Cognitive thinking would pretty much be out of the equation.

Waves of miracles, however, soon washed away those perceived walls. Ever been in a large audience yet feel the speaker is talking directly to you? This was my experience with Rosalyn. She would glance my way before delivering a line that pierced through the heart of me. Among the words that echoed loudest, “Some of you are working at jobs that are literally killing you.”

Given her keen ability to read auras, she may well have seen this aching truth in my aura and related it out to the group. Yet maybe I was one of several she saw dying a slow death in toxic work environments. Whatever, the message hit every nerve. Those channeled words came rushing forth:

“You can but have it all if you just decide to and then step toward and into it.”

As numerous light bulbs turned on, I began making some decisions right then and there, putting the gears of genuine change in motion.

My ulcerative colitis had gotten so bad I was running to the bathroom every 30 minutes. I was fortunate enough to have Rosalyn lay her hands on me, bringing balance and replenishing energy to key areas. That week my exhausted colon returned to a peace I had all but forgotten. From there, the whole atmosphere began taking a transcendent overtone.

A particularly profound phenomenon took place each night. Upon returning to my room, I would encounter a vivid specter of Rosalyn crying in the corner. Crying in that deep, gutful, diaphragmatic way. I would fall to my knees and cry alongside her. For an hour sometimes. Crying like this uncovered buried shit I’d long forgotten. Beyond anything said or done during the course of each day, this process unearthed innate knowledge she seemed to be retrieving from me from the moment our eyes locked in the ceremony hall.

As Rosalyn performed healings on volunteers, she was clearly connected beyond the thinking mind to guides who led her movements. But what about all that technical stuff that had me backing away before we even got started? Quite honestly, I left that week not exactly sure what had been said or done.

Well, as with all things, it was necessary for me to discover some answers on my own. And it has only been in the last couple of years — during that slow, slow Uranus-Pluto Square — that I began to discern how mental understanding combined with higher guidance is the recipe for bringing goals into being.

A lifetime of prayers never worked because I was just spouting off a wish list to something I, in truth, only hoped was out there. I began to see firsthand how my mental and emotional investment in the goal, simultaneously offered to the intelligence beyond my physical body, makes things click. From what I can tell, only then can the parts of ourselves beyond our understanding help us help ourselves.

And, boy, do they ever. The very reason having unbridled sex with groups of men is a holy encounter for me is because of the deeply dedicated prayer and offering of intention that precedes every entry into what could rightly be considered a den of lions.

And the only reason I’m alive today to have sex in the lion’s den is because my higher guidance rallied to make itself clear to me in 1990. Witnessing the increased rate at which guys with AIDS were dropping dead following lethal doses of AZT, I honored the very fibers of my being that refused to be poisoned by the accepted medical treatment of the day. It was the first time I took a stand and chose my gut over the ‘experts’.

And so the door was opened to honor more impulses the madding crowd did not support. Despite formal instruction on the “enlightened” lotus position way to meditate, from the Self Realization Fellowship as well as Zen Buddhist monks atop Mountain Center, CA, I finally had to listen to my body and intuition. Going completely against the grain, I now connect with my higher guidance while standing in the middle of the room.

I wound up channeling a massive collection of insights and yet much of it remains a mystery. I do believe as a whole it spells out ultimate human potential. I frequently shoot for some of those brilliant stars. If that helps me land somewhere near a mountaintop, I’m betting that’s no small thing.

Similarly, in 2011 I had surgery to remove my ravaged lower intestines. My quality of life improved immeasurably. So once the story was told, Rosalyn’s retreat wasn’t so much about physical healing for me. It was about once and for all listening to myself without apology. And eliminating the belief that any guidance emanating from within me couldn’t possibly be accurate. As it turns out, no other source could be more accurate for my part to play in this world. Trust me; I’ve stood on my own two feet and meditated about it.

Rob Moore is on a continuous quest to identify recurring truths through his own life and that of others. Expressing his findings via writing and imagery, visit r0b1.com to learn more.