Alexandra Marx: Born and raised in Franconia, a beautiful and much underrated part of Southern Germany, Alexandra Marx built the basis of her artistic practice on a BA in Visual Performance at Dartington College of Art, a small specialist college in Devon, UK, working in photography, video, installation and performance. 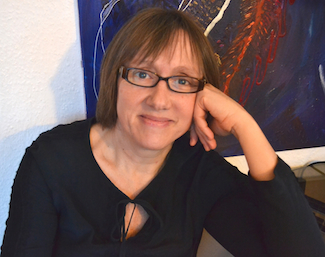 After returning to Nürnberg, her home city, she started the endeavour in earnest to find out the truths about her self. For the last five years she has been journeying towards ever greater authenticity by means of self work, therapeutic process and shamanistic practice.

Her artwork has been moving towards painting more and more, as she finds it is the most direct medium so far. She is also a singer, a collector of pottery and glass, a translator, and she has a wild love for this stunningly beautiful planet. Inner worlds, Otherworlds as well as this world and its function as a mirror of self are at the centre of her work.

Alexis Suzanne McLean has been painting since she was three years old. Literally. Her mother was a jeweler and worked from home and would give her paints, a smock, and the linoleum kitchen floor. Ali, as her family calls her, was raised to be independent out of necessity. Her parents worked full time after the divorce and she did her own thing. 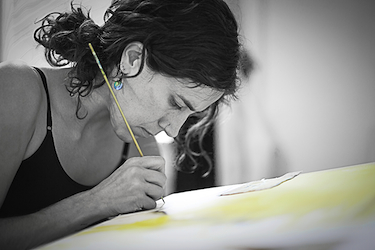 There is always an element of nature in Alexis’ work; she describes this coming from her outdoor-enthusiast father; they would hike mountains and ski all day, which are some of Alexis’ best memories.

“I would not be the person I am today if it were not for my dad bringing me into the woods.” But a darker side ensues, a memory of always being signed up for ski school and summer camp because he was so busy makes Alexis look down in contemplation. This is not bad, she mentions: “It gave me a deeper connection to the Colorado mountains, nature and survival.”

Alexis’ story of survival is not only in nature and the glorified idea of Southwest Colorado, but also in family life which included an evil stepmother, alcoholism and divorce. “I think an awareness of everything has to exist in order to be connected… my family did a great job, and I am grateful for how I grew up. I think everyone has something to deal with, some pain from childhood, no matter how weighty it is. The monsters from the past always get bigger if we don’t invite them in.”

Thirty years later, she is pursuing a professional art career. After receiving her degree from Fort Lewis College in Humanities with a focus in Fine Art, she continued to pursue her love of the outdoors in the Southwest. From tipi living, shared studios, mountain climbing and extensive solo adventures, Alexis developed another layer of survival and once she realized she needed a studio space, instead of an apartment or house, she did whatever it took to pursue her painting work.

Her art describes space and emotion, human existence, fragility, nature and our constant struggle to connect on this busy planet. 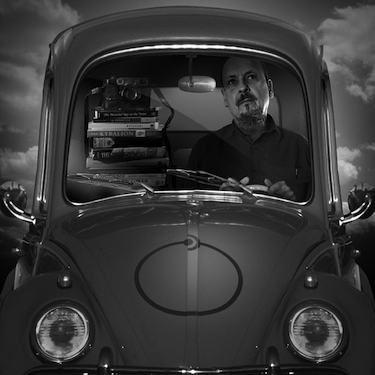 Charlie Lemay; photo by the artist.

Charlie Lemay: Charlie Lemay is a native of Manchester, New Hampshire, who has been a professional graphic designer and photographer since 1973, as well as an educator at the college and secondary school levels. His photographic digital collages and traditional photography have won numerous awards and have been exhibited nationally.

In 2011, Charlie created his own Digital Tarot. You can select a random card and see the entire deck on his web site.

In 2014 he self-published “Seeing / Insights + Images,” a book pairs his words and images. It went on to win two Finalist Medals in the 2015 Next Generation Indie Book Awards.

Lizanne Webb: We hope to have more about Lizanne posted soon; she has been creating gorgeous, original branding for Planet Waves for a few years now. In the meantime, you can visit the website of her advertising and branding company, Structure Brands: http://structurebrands.com/ 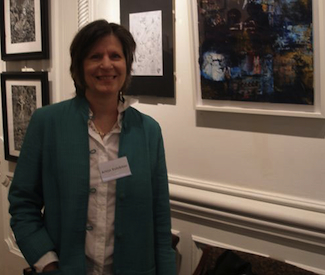 That is how I like to approach my work.

I take as my starting point for my communication series that my thinking process and my painting process are one and the same. There are layers of information in the layers of paint and newspaper on the canvas.

I wanted to show the shift in the way news is distributed through the news media and how the internet has changed communication forever, that the distribution of news has become entwined with corporate interests.

Is there such a thing as a ‘free press’ anymore, and what has happened to the art of journalism?

With my smaller collages I like to use recycled, found objects and organic materials to show that we are more connected to our planet than we care to admit. I also want my work to convey that behind the mask and/or underneath the surface more is going on that is much more interesting than what first appears.

Steve Engle writes: These are some of my latest images dealing with my obsession with women’s bodies and combining male and female sexes, which has played a continuing role in my work over my entire art career. 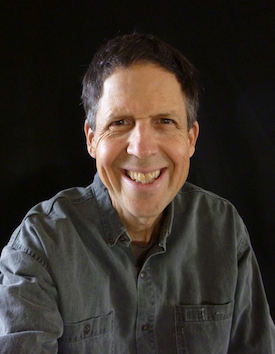 A major influence on my drawings and sculptures has been that of the arts of the South Pacific. I was born and raised in Hawaii and grew up surrounded by the art of Africa, Japan and Indonesia as my parents were both artists and avid collectors.

I also traveled at an early age with my family throughout the South Pacific islands and Australia. This early exposure to tribal art of different cultures (with many sculptures of androgynous figures) left a definite impression upon me that I feel influenced my own art years later.

As a practicing artist I later discovered the arts of Oceania which both attracted and repelled me with its power and grotesqueness. I found this particularly true of New Guinea and New Caledonia yet I keep returning to these sculptures for inspiration.