Your Mars Effect Readings Will Be Ready Tonight!

Whew! We made it! Eric has finished the last of your sign readings for The Mars Effect, the 2014 annual edition from Planet Waves, and the Planet Waves editorial, artistic and technological teams have proofread, illustrated and coded this project into beautiful existence. It will be ready for your eyes, ears, mind, heart and soul later this evening. 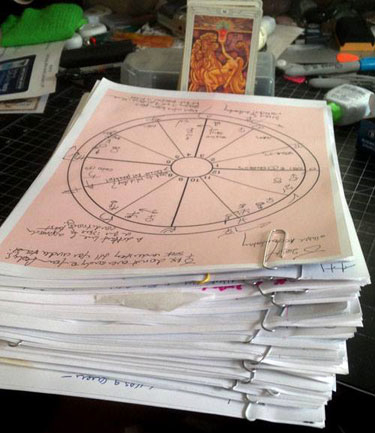 Chart files used in the creation of The Mars Effect. Each group covers one sign, including a chart for the ingress of the Sun into that sign, minor planet listings, the prior year’s reading, handwritten notes and a sketch that integrates the different astrological systems into one diagram relevant to your sign or rising sign. Photo by Eric Francis.

If the last few days have been a whirlwind relay race for the Planet Waves staff, the last few months have been a series of back-to-back ultra-marathons for Eric. He usually begins his research for each annual in August; here we are now in mid-January, with an astrological publication unlike anything else you’ll find on the Web.

I’m still not entirely sure how Eric manages to create such extensive, accurate, prescient and thought-provoking readings on top of the mountain of writing he already does on a weekly basis. Diligence, devotion and a sense of mission count for a lot.

This is the fifth annual edition whose process I’ve had the honor of witnessing and working on. I’m usually one of Eric’s proofreaders and “karma checkers” for every word of the written sign readings. Not only do I watch for errant commas and funky typos, but I read with an ear to the tone of the content — what gets said and how; what is left unsaid — to make sure there are no inadvertent holes or missteps that could trip someone up.

As I read, I often imagine friends and family members born under the sign I am reading, feeling out how it fits for them; I’m always amazed how well it matches up, at least as far as I am allowed into their lives. I’ll have to read my own Sun and rising sign again later, when I’m not hyper-focused on the proofreading deadline, but even during my first encounter with them Sunday I felt myself nodding internally in agreement and wondering how certain changes might manifest.

This year, like every year when I read the annual, I’ve learned a little more about things like how the houses work in applying astrology to actual, practical life, and the fascinating way that planets extend their influence on other planets through things like sign rulership (but you don’t have to understand these things to appreciate the readings). And though Mars sometimes gets dismissed as being all about war, libido and brash action, it seems that in Libra it really can work in mysterious ways.

Eric’s broadcast of Planet Waves FM for tonight will include an overview of 2014 astrology, along with a segment explaining how he works with solar houses and whole sign houses for the annual edition.

As usual, we have Monday’s Daily Astrology column for you. Len’s column will post to the blog at noon. And if you have not already, be sure to stop by the blog Wednesday afternoons to check out our new column by shaman and Mayan daykeeper Carlos Cedillo. If you thought the Mayan calendar ended in 2012, think again.

P.S. If you have not yet purchased access to the Mars Effect readings, individual signs are $29.95 (with discounts for multiple signs). You also have another chance to purchase the 2014 All-Access Pass, which grants you access to all signs of The Mars Effect, plus all birthday readings for a year and much, much more.