When Mars comes to its retrograde station on March 1, 2014, it does so in a very sensitive position, galactically speaking. At 27 Libra, Mars is within two degrees of a black hole at 29 Libra, and sets off a grand cross of deep-space energies, with an exact opposition to a second black hole at 27 Aries, a square to a third at 28 Cancer, and also exactly square to a pulsar, another type of deep-space anomaly, at 27 Capricorn. Moreover, when the subsequent direct station occurs on May 19 at 9 Libra, Mars will form a T-square with two quasars, opposing one at 10 Aries and squaring another at 8 Cancer.

In a nutshell, this dual activation of black holes and quasars signals a period of revision, reversion, recalibration and exploration of our sexual natures (all black hole effects), with extensive experimentation and trial and error, followed by the opportunity to stabilize these changes and ground them more fully into our prevailing reality (quasar properties). 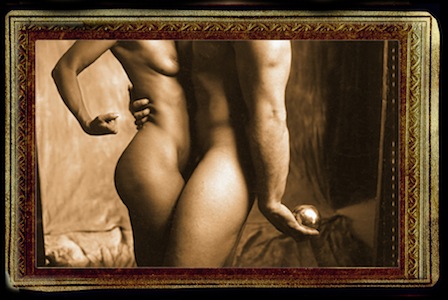 Black holes and quasars are deep-space anomalies that mirror each other. Black holes, collapsed remnants of stars whose gravitational pull is so strong not even light can escape them, represent the volte-face, the swift, sudden, complete and unexpected change in the status quo reality. They promote instability and reversal, but are also incredibly creative, presenting new options and previously undreamed-of solutions to old problems, culled from the multiplicity of alternate realities in parallel universes of potential to which the black hole grants access, allowing the individual to enact radical change and dramatically alter existing conditions.

Quasars, among the furthest and brightest objects in the universe, are in many ways the black hole’s opposite, allowing for pervasive, permanent change, success and advancement, stabilizing conditions and shining a bright spotlight on whatever they touch, often bringing public attention and acclaim. Once termed “white holes,” quasars are the exploding origins of proto-galaxies, and may allow the re-emergence into our dimension of the matter and energy engorged by an associated black hole. The changes wrought by the black hole may be ephemeral and fleeting, but when enhanced by quasar energies, they can become lasting and well-integrated into the framework of everyday reality.

Black holes tend to extremes, and when Mars is involved, this can translate as debauched libertinism or ascetic celibacy, by choice or through circumstance. It’s likely that many people will experience both ends of this spectrum in turn during the retrograde, especially if Mars is contacted to black holes natally. Others may decry or look askance at our choices during this period, judging our partners to be unsuitable, our practices execrable, our desires unfathomable. It can be difficult to communicate honestly about our desires and fantasies, fearing rejection by others, but sublimation or repudiation of our urges can lead to internalized anger, disgust and feelings of guilt, worthlessness or inadequacy.

Often the fantasies this combination evokes are so far outside what is perceived as ‘normal’ that we tend to maintain strict secrecy about our sex lives, compartmentalizing them and obscuring our desires or habits when in the company of others with whom we’re not directly involved sexually. At its most extreme, this can lead to living a ‘double life’, where even our closest intimates are unaware of our activities. But the ‘purpose’ of black hole Mars, if it can be considered such, is to stretch our boundaries, expose those deep inner places of our psyche from which inventiveness springs, and enact these in creative, imaginative and original ways, unique to ourselves. The black hole’s creativity, linked to an expansion of consciousness and broadening of perspective, is virtually limitless, bounded only by our imagination and our ability to enact it.

The ‘purpose’ of black hole Mars, if it can be considered such, is to stretch our boundaries, expose those deep inner places of our psyche from which inventiveness springs, and enact these in creative, imaginative and original ways, unique to ourselves.

There is a strongly obsessive-compulsive quality to black hole Mars, with thrill-seeking common, and an attraction for the taboo and for forbidden or dangerous persons or practices well in evidence. That sense of attraction works both ways, for black hole Mars is magnetic, compelling and alluring, able to bring others into its orbit almost effortlessly, for good or ill. The sense of sexual energy is palpable, and may be too intense for some to confront directly, but this drive needs to find expression; if denied, it can emerge as serious mental or physical health issues.

Black hole Mars greatly increases sexual appetite and the intensity of the experience, and revels in multiplicity of partners and practices; sexual matters can become addictive and intrude into everyday reality to the extent that we are able to focus on little else. Passion burns brightly, and partners may appear suddenly, without warning, disappearing again just as unexpectedly once the sexual urge has been fulfilled. A great deal of energy may be expended on sexual pursuit and conquest, and psychological fixation with sexual release is common. If standard outlets are unavailable, auto-erotic practices may increase, as indeed may be the case even if regular channels exist, particularly if the individual is unwilling to look beyond the confines of existing relationships, which may not be able to fully absorb the increased sexual cravings.

The period of the retrograde allows us to play and create with these desires, often previously buried so deep that they have been barely discernible, if at all. The ‘parallel reality’ aspect of black holes virtually guarantees that opportunities to explore these urges will arise, typically in unexpected and unusual ways. For the individual without natal contacts from Mars to black holes, this can be a very disconcerting time, confronting parts of ourselves that have been denied. Even for those well-primed by a lifelong interaction with these energies, the retrograde can bring to light unsuspected facets of our sexual selves.

Adding to the complexity of this time is the exact square to the pulsar at 27 Capricorn, which when Mars turns retrograde is closely conjoined by transiting Venus at 26 Capricorn. This blending of Mars and Venus in square is not without conflict and strife, but also brings a great deal of energy to the equation. We may feel at odds with ourselves over whether we’re truly seeking sex or love, passion or intimacy, and these may seem incompatible goals, incapable of integration in a single relationship. Venus in the mix indicates we may be more inclined to seduce than coerce, to slyly encompass the object of our desire rather than attempt to storm the citadel by force. There may also be a greater likelihood that we can enact our fantasies within the context of existing partnerships, rather than looking further afield for release.

The pulsar here suggests that a great deal of information about our sexual expression and our partnerships is available during the retrograde, if we seek to access it. Pulsars are stellar remnants that rotate rapidly and emit pulses of radiation at regular intervals. They are informational in nature, and often this translates as intuition, ‘felt’ or ‘body’ knowledge, a knowingness that wells up into consciousness from a cellular level. More standard sources of information are at peak performance now, too, with communication a high priority and gossip rampant. We may find we learn more than we wanted to know, about ourselves and others close to us.

When the retrograde terminates in May, we’ll have amassed a huge amount of data and experience, much of it in previously unexplored areas of our sexuality. This can ‘evaporate’ in some sense, remaining only as a memory as we pick up the threads of our former lives, though we are forever altered by the new experiences and perceptions, even if we choose not to integrate them into our common practice.

But Mars’ station direct in a T-square to two quasars suggests we’ll also be granted the opportunity to make some of these changes permanent. New relationships may form, old ones alter to accommodate new perspectives. Quasar energies can ground the black hole’s manifestations into a framework that maintains stability and allows us to adopt some of our experimentation, making it an enduring element of our lives. It’s our chance to expand our horizons, grow into ourselves, enact more of who we are at our core and realize that fantasy can, in fact, become reality.

Alex Miller is a professional writer and astrologer, author of The Black Hole Book. His pioneering work with deep-space points began in 1991, and continues with research into the effects of personal-named asteroids. His work appears monthly at www.daykeeperjournal.com and he can be reached at glaktix@verizon.net.