2014 Eclipses: Relationship with Self

During 2014, there will be a series of four eclipses that take place across the Aries-Libra and Taurus-Scorpio axes, raising themes of jealousy, values and relationship. The eclipses occurring this year are calling each of us to be real and honest with ourselves and those around us, to break free of old paradigms and ideas, to investigate core needs and values, and to step off the cliff of safety into a relationship with ourselves and others based on bold honesty and gutsy intimacy. Ultimately, a transition is on offer from other-centered relationship models to relationships that focus on individuals cultivating a strong relationship with self. 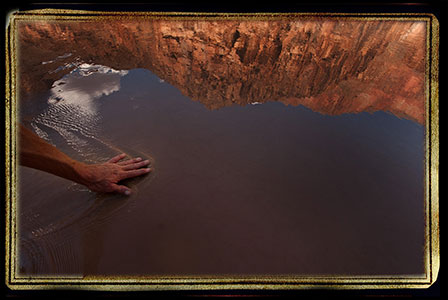 These upcoming eclipses are useful times to make important life changes. Eclipses are pattern-setting events and can be utilized to break down patterns and build new ones. What you do on the day of the eclipse and the days on both sides matter. Just as a megaphone amplifies sound, eclipses increase experience. Set aside time and energy to do more of what you love. Get up a little early, stay up a little late, or reschedule appointments and commitments to carve out time to do what you want more of in your life.

Eclipses also bring a concentration of experience, which can feel like a lot of life is packed into a short period of time. Time is already moving fast. The addition of these eclipses could feel like punching it to warp speed. I suggest rather than just hanging on for the ride, lean into it and guide where you go through focused action. Groups of eclipses act as a continuous experience or growth process. Let’s take a closer look at this year’s series of eclipses and how to work with the astrology.

The first two eclipses take place on April 15 and April 29, in the midst of a grand cross in cardinal signs with Pluto in Capricorn, retrograde Mars in Libra, Jupiter in Cancer and Uranus in Aries. A grand cross is an astrological alignment involving planets making four 90-degree aspects to each other along with two oppositions. Think of it as forming the shape of a square with Uranus, retrograde Mars, Jupiter and Pluto at the corners. Those corners are opposite each other, forming the opposition aspects.

Grand crosses are intense astrology that drives hard for change and growth, yet can also be a great tool for personal discovery and development. Isabel Hickey, in Astrology: A Cosmic Science, described working with the cardinal grand cross, saying: “There is great strength in this aspect because it creates obstacles that demand attention … . In cardinal signs the outlet for the grand cross is action.” With the first two eclipses occurring during the grand cross, the intense energy will be even more magnified — pushing for resolution through conscious, thoughtful decisions and actions.

On April 15, the first eclipse occurs with the Moon in Libra and the Sun in Aries. This Libra eclipse begins a period of transition that will involve questioning and exploring many relationship factors that previously existed — a ride I suggest you take down the rabbit hole of awareness.

Eclipses are pattern-setting events and can be utilized to break down patterns and build new ones. What you do on the day of the eclipse and the days on both sides matter.

A good number of facets of relating that our society encourages are based on principles of jealousy and control. Jealousy does not provide either person with a greater sense of connection or intimacy, yet it is touted as a normal part of relating. Parents, grandparents, religious institutions and the larger society, including what you see in movies and on TV, teach responses of jealousy and control as viable options in relationships. Yet, there is little discussion when these approaches don’t create happier, healthier partnerships.

This eclipse in Libra is disrupting current relationship patterns and structures to bring these responses of manipulation and jealousy to the surface. Out in the open, it will be easier to examine these patterns and find alternative options. Jealousy and manipulative behavior are actually based on real needs — the need for emotional stability, the need to feel acknowledged and the need for independence. Those needs are authentic and based on core human desires, yet the way in which many people have been taught to express them is counterproductive to what they seek. Look at the ways jealousy has impacted you and those around you, including your parents and grandparents, and on up the family tree.

As you move through this shadow material, I suggest taking the longer view that it is a chance to get to know yourself better through understanding your emotional response and behavior. “Relationships — and jealousy in particular — provide an opportunity to come to a fundamental understanding of the self,” noted William Pennell Rock in the article Jealousy and the Abyss. Hold space for honest conversations with yourself and your partners about what is and isn’t working in terms of creating relationships that provide the space and emotional security for both parties to show up as themselves, and grow and change. Emotional stability, acknowledgement and independence can only be given to you by yourself.

From a conversation on shifting patterns of jealousy and control in relationship, the focus changes to questions surrounding values during the second eclipse taking place on April 29. This Taurus solar eclipse brings an old idea about what you value, or a few ideas, back into your life. Something that you let go of because someone, or a few people, told you it was impossible, unrealistic or in some way unattainable, now is doable and applicable to your relationships. Solar eclipses can come with the sensation of fresh bursts of energy, and with this event taking place in Taurus there is a fresh perspective or approach to this old idea of what’s important to you.

Think of sharing your values like hanging a well-designed logo or sign in front of your shop; it’s how you attract the right customers. Without that sign the customers who want what you offer won’t know to come to your store. Your value process is similar — when you advertise what you value it helps filter and select those who also share what is important to you.

Later in 2014 another pair of eclipses arrives, this time a lunar eclipse in Aries and a solar eclipse in Scorpio. On Oct. 8, with the Moon conjunct Uranus in Aries opposed by the Sun in Libra, the eclipse is in close conversation with the ongoing Uranus-Pluto square, applying revolutionary energy to your continued relationship investigation. Uranus and Aries both share the attribute of knowing how to be bold, daring and show up as themselves. The Moon partnering up with Uranus in the sign of ‘I am’ is supplying plenty of this courageous, focused personal energy to the discussion of how you stand in your personal power while in a relationship. Knowing what you want and what you value is important to building and growing relationships that meet both individuals’ needs — so is removing jealousy and strict relational rules. This astrology is a call to take what you’ve learned earlier in the year during the first two eclipses and apply it to a personal revolution and re-invention of how you show up in your relationships.

From this position of revolution and re-invention, a new path presents itself during the last eclipse of 2014 on Oct. 23. It is a powerful solar eclipse in the first degree of Scorpio. This eclipse brings an opportunity to cross an important and profound threshold onto a new path. To be guided into self-awareness — into a relationship with self as your primary relationship.

The Scorpio eclipse occurs at 1 degree Scorpio conjunct Venus and Pallas, an asteroid that has a lot to do with penetrating to the core of issues. The first degree of Scorpio has a feeling of beginning something new, something transformative. Scorpio is the sign representing the themes of death, sex and the things thought of as ‘issues’ — all experiences that push us to the brink and challenge us to grow.

The alignment of the Moon, Sun, Pallas and Venus in Scorpio is opposed by the minor planet 1992 QB1 in Taurus. Examining the minor planets involved in the eclipse, Pallas and 1992 QB1, provides an extra layer of depth and detail to the picture. 1992 QB1 is about profound transformational moments that move us beyond a threshold. Death and birth are two of these threshold experiences; so is ego death and rebirth into a mindset of higher self-awareness. As Eric Francis wrote in Small World Stories, “1992 QB1 is more about going beyond the known and into the unknown as a voluntary experience of saying yes. There’s a lot here about letting go of fear, which is part of every healing process. [1992] QB1 shows us that there’s something on the other side of what we’re afraid of, and of the fear itself.”

This last eclipse for the year brings a thresholder moment, like taking the first step out onto the invisible bridge just as Indiana Jones did in the film The Temple of Doom. This step out beyond the edge is about trust — trust in yourself and the work you’ve done to understand who you are, your needs, what you value, who you want in your life and the kinds of relationships you want to build. It’s also about having the trust that by being 100%, unashamedly authentic and sharing that authenticity you will be met out on that invisible bridge by others who share your values. At the end of this series of eclipses, your partners and the foundation of your relationship may look quite different from how they did in 2013. For growth and progress to occur change must happen first. And this year change will be the one certainty.

Genevieve Hathaway is an astrologer and Planet Waves contributor. She is available for astrology readings. You can contact her at genevieve@venusinblue.com.